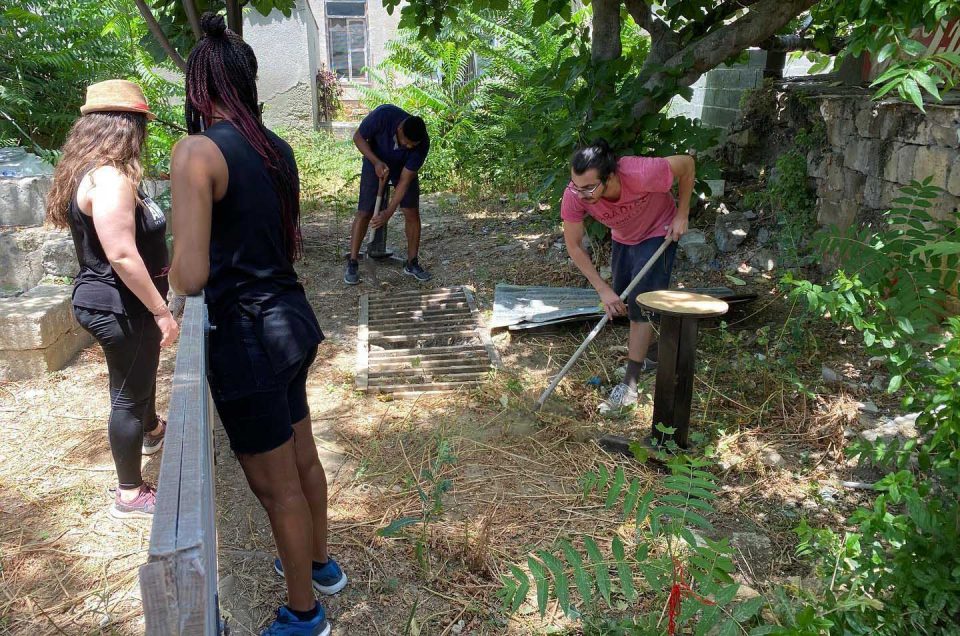 Members of Gardens of the Future clearing up the land they have been leased for their community garden.

Gardens of the Future, an impressive plan to build community gardens in the heart of Cyprus’ cities, is this week one stop closer to becoming a reality.

The initiative already has the support of the Nicosia municipality, and has been chosen as the number one project by Cypriot online platform Pusula, after it published an open call for ideas. Money for the project, €50,000, is available for the winning project from the World Bank, and this week the winning team sent its expression of interest to the bank which has the final say in the funding.

Gardens of the Future is an ambitious project, which is to create a network of communal gardens in cities, starting with one space in the centre of old Nicosia. The location is not a coincidence but has been carefully thought out, as has the whole project.

“The first garden is located in a place of strategic importance,” architect and co-founder of the project Natasa Christou explained. “It is in the heart of the city, near the Omeriye mosque. The importance is the proximity of the city. Usually when we grow gardens we grow them in our houses or we grow them outside cities.”

“It is like connecting the past and present,” art and culture leader of the team Argyrou Tomazou added. “Many of us live in apartments but we still have plants and have family which knows about gardening from the past, so it all comes back to us.”

So much for the location, but what will the group, which come from different disciplines such as social innovation, entrepreneurship, bicommunal activists and including even an innovative chef, do with the building and the 500 square metre garden, on long lease from the Nicosia district administration?

A lot, as they have joined forces under one purpose: to become ambassadors of sustainable change. The initiative combines elements of nature, communities, architecture and technology to achieve it.

The garden is a place where food can be grown, and where the community engages in cultivating garden plots, home gardens and balconies.

“We want to teach them how to develop their own garden, and how to claim community spaces such as places in the moat and school gardens,” Tomazou said.

“I doesn’t mean to grow food only horizontally on the ground but also vertically, and on the roof.”

This part of the project will take place in what has been named the Plant Hub.

Other places have been allocated different uses.

One is the Waste Bank, a laboratory which ensures nothing is thrown away and all material is used to construct something. Already the team has been working on mixing waste to create construction materials.

Community is of vital importance, thus social areas are being created indoors and outdoors. The main social indoor area will be used as a space to discuss, host workshops and connect to nature, as Tomazou said, to show “the garden is everywhere”.

Perhaps the best way to describe what the team is all about is to explain the philosophy behind what has been dubbed the Water Station, at the moment some old toilets, and what used to be a cistern and a couple of wells.

For this group it is much more, an opportunity, just as they view the coronavirus as a chance to make more elaborate plans and not as an unwelcome interruption. Indeed, the co-founder has said the virus “helped to build momentum” and “created a fertile ground for pioneering initiatives”.

“We don’t go with the norm, to take for granted how people use to clean themselves by taking a shower or use a toilet,” Christou said. “We redefine cleaning, not by simply going back to the past but to combine different elements.”

It comes back to what the ideas behind the project are: celebrating the circular economy, co-creation, promoting innovation, reviving tradition and sharing experiences.

In some cultures cleaning is a shared ritual, which is one of the themes being explored. There are other aspects, such as the possibility of cleaning water by using filters such as certain plants. How is water best transported without any waste is another area worth exploring, Tomazou explained.

For now the spaces have been allocated potential uses, and the area has been cleaned, but there are bigger plans ahead.

As the project’s title suggests, the team is not thinking about one garden, but envisions a network of gardens around the city, from school gardens to the moat, and by 2021 the plan is to create 300 gardens in all cities. They already have two requests, one from Larnaca and one from Limassol, to see what can be done with two properties.

Who will take part? At the moment everybody who is willing and in the area, including local craftsmen, neighbours, and refugees, but the aim is also to involve Turkish Cypriots. A small residential area at the premises is being set up with the hope of attracting people from abroad who are interested in the initiative, to teach, learn or both.

Next on the schedule is the set-up of the space, which should be finished by September. In October the garden will be launched, and phase 3, from November 2020 until April 2021, is the time when interested people will be educated on how to grow their own gardens.