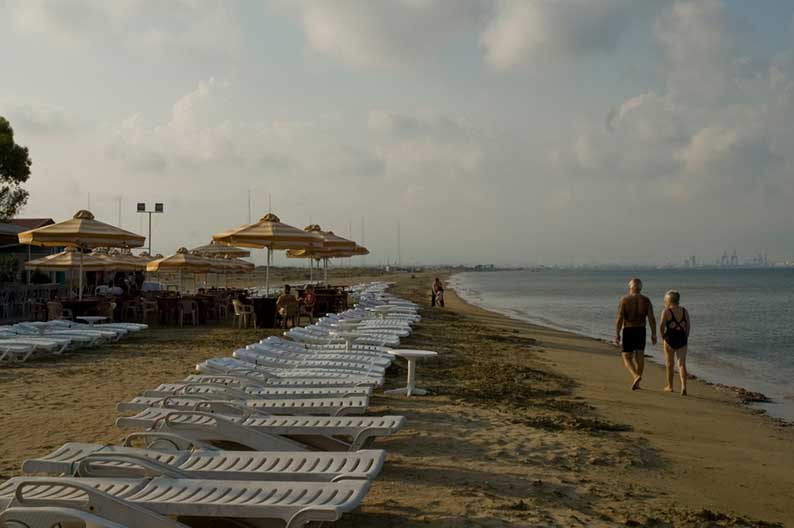 Empty beaches as tourist arrivals plunge around the world.

A plan to make Lady’s Mile beach in Limassol more accessible to the public has been dragging on for 15 years, harming the environment and businesses and denying the public the chance to easily access one of the city’s nicest beaches.

Currently, the road to Lady’s Mile is a decrepit dirt road, ploughed up with bumps and potholes. In a bid to avoid it, many end up driving in the wetlands, ruining the sand dunes and natural habitats that live there.

“The whole area is the most important wetland area of the entire island and people are driving through it,” Lefkios Sergides, executive director of Terra Cypria, an NGO focused on environment and conservation awareness told the Sunday Mail.

The absence of proper parking often encourages people to drive right up to the sea, particularly those with 4×4 vehicles, which also affects nesting turtles that end up leaving the area and the eggs in the sea, he added.

Residents for years have voiced their irritation that a more accessible road can’t be built that makes it easier for people to get to the beach and less destructive on people’s vehicles.

Yet all along, a master plan outlining an environmentally friendly road with cycling paths, and provisions for electricity and sewerage has been garnering dust, yet to be implemented.

“We are witnessing the death of this project because of bureaucracy,” Disy MP Andreas Kyprianou told the Sunday Mail.

During a House commerce committee session on Tuesday, MPs quoted a letter from the interior ministry saying that Lady’s Mile was not a priority.

“How is it when the government wants to give the green light for a private development, they get the licence right away?” asked Akel MP Costas Costa. Yet this project has been dragging on for years, he added.

It also came as a surprise to deputies to find out that the ministry, in a letter to Limassol municipality, said if they wanted to carry out a building design for the road they could and would also have to do an environmental impact assessment.

According to Costa, not only did this come a year later but Limassol municipality has no jurisdiction over the area which lies in the British bases.

The cost of the project during a House commerce meeting last year was estimated at around €6m.

The Sunday Mail understands that the municipality had volunteered to carry out the building design so as to get the project done faster in a bid to help, but this is now just causing a further delay because responsibility cannot be directly pinned to the government.

Limassol mayor Nicos Nicolaides was quoted last week as telling Limassol based radio station Channel 6, that the local authority had reached out to the town planning department several times but failed to hear back and therefore could not proceed.

While some have voiced concerns over developing the area for fear of harming the environment, the irony is that the inaction is causing more harm than good.

Stergides said some years back, Terra Cypria had been invited by the town planning department to offer feedback on the plan.

“It had very good parameters for good coexistence of humans and nature.”

The road was to be made in an environmentally friendly manner. Rather than asphalt, it would be a permeable surface, made by plastic sheets and sand to settle it into the ground.

It also provided for a cycling path.

“We don’t want to see a commercialised place, we don’t want a second McKenzie,” he said, referring to the busy beach in Larnaca.

According to Stergides, the sand dunes are habitats for lizards and the spring footed lizards which are endemic species in Cyprus. The wetlands are also home to nesting birds like the Kentish plover.

“There needs to be some control over the situation.”

Responding to previously voiced concerns over lighting in the area should it become more accessible to the public, Stergides recalls that street lights were not included in the plan but instead reflectors, similar to what one may see in low lit roads.

In 2017, restaurant owners on the 6km stretch of the beach protested not only because of the absence of a functional road but also lack of basic facilities. Businesses use generators to provide themselves with electricity. There are no public bathrooms or showers available.

Instead, the six restaurant owners offer their own facilities to all people on the beach.

Three years ago, owner of Captain’s Cabin and Aplostra restaurants at the beach Filios Demetriou told the Sunday Mail the that the issue of Lady’s Mile first came up some 10 years ago.

“Parliament discussed it and every couple of years it’s brought up again,” he told the paper.

Speaking to the paper this week, he said the sentiment hasn’t changed.

“We’ve invested our own capital in this, what has the government done for us? They only take taxes but what have they actually done?

“We have no sewerage. I was forced to make my own biological waste treatment…we’ve been abandoned by the state.”

Some of the restaurant owners that could afford to have paid tens of thousands to have an electricity network. They have relied on generators for years.

“But When the bases fly helicopters over the area every day and over the beach, that’s not a problem for the environment though is it?” he added.

Disy MP Kyprianou also highlighted the health and safety concerns of dealing with erratic electricity supply at a restaurant in Cyprus’ sweltering summer. “There’s food in the fridge, you can imagine the problems with unstable electricity.”

If the plan however is so good and the existing problems so major, what then is the cause of the hold up? One source who did not want to be named said possibly because the project costs this much, there may be squabbling over who gets to carry it out – though with objective calls for tender that shouldn’t be a problem.

Another conjecture suggests that beaches down Limassol’s main coastline, from the centre to the tourist area are very profitable to the local authority and there may be something more sinister in keeping Lady’s Mile less attractive.

According to Kyprianou, the matter is up for discussion again at the House on July 14 and it is hoped the deputy tourism minister and interior minister will attend.