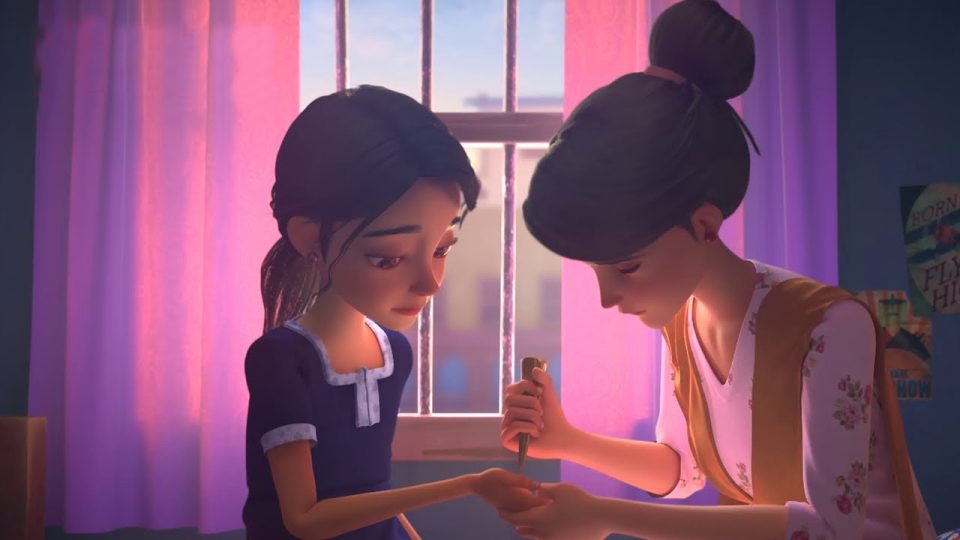 “When I began to write about Pari I always imagined her to be free and to be flying,” said filmmaker and journalist Sharmeen Obaid-Chinoy in a 2019 interview to Animation Magazine.

“We sat her on a rooftop, and gave her dreams of becoming a pilot because when that dream is taken away from her and she is married off, there’s a moment when you realise that her dreams will never take flight,” she added.

This is the premise of computer animated short Sitara: Let Girls Dream, which was released on Netflix earlier this year. A teenage girl finds herself on a rooftop with her much younger sister. The older sister, Pari, holds two paper planes, initially withholding one of them from her sibling.

Mehr, the six-year-old, fretting from not being allowed to participate, switches to a more cheerful disposition when Pari gives her one of the paper planes. They exchange salutes the way pilots do before takeoff, a clear role model point in the film, and proceed to launch their planes towards the outstretched city in front of them.

Mehr’s plane quickly veers off and flies towards an unknown destination, exiting our screen to the left. Pari’s plane continues on towards the general direction in which it was thrown. The camera follows the plane’s course until its landing spot, just in front of Pari’s father’s feet. Cue the shift to dramatic, tense music and the girls hiding from their father’s scanning eyes.

This is the language of the film. Being a silent film, with music and basic sound effects as the only audio, it makes the most of its visual composition to convey its message. The aforementioned throwing of the paper planes foreshadows the arcs of the two sisters. One kept in the city, falling to the ground, checked by an authority figure, eliciting fear and trepidation. The other is still soaring in the air when we last see her, literally taking a left field turn and bucking the trend.

The film is somewhat double-dealing. There is a deliberate clash between the themes and story arcs it explores versus the scoring, colour palette and character designs it utilises. It almost lulls you into thinking this is another blithe tale with an unambiguously happy ending, the clear-cut villain being dealt a lesson. But life is scarcely as straightforward as that. Who is the villain here? Misogyny, elements of tradition, the economics of poverty, patriarchy?

“Animation is also not considered a threatening medium – parents watch it, children watch it. You give life to characters that shine on screen, they sing, you use music – it’s possible to reach two different audiences, parents and children,” Obaid-Chinoy said in that same 2019 interview, before adding that “child marriage is such a sensitive issue in so many countries, including mine, that creating a film that spoke about that issue seen through the lens of the dreams of a young girl was hugely important.”

Indeed, Obaid-Chinoy uses the subtlest and briefest moments to convey so much about characters we spend little time with. A father who becomes conscious of a grave mistake, albeit too late for one of his children; the mother who sees her eldest daughter being forced into the same life she pretends to enjoy; the son who acknowledges a father figure he does not want to emulate; a groom who is oblivious as to why his child bride is withdrawn and downhearted.

In another interview Obaid-Chinoy said that “film has a way of revealing not only the soul of each person you see on screen, but also the core of an issue that might otherwise be seen as a mere headline or statistic.” In Sitara: Let Girls Dream, you can clearly see this statement is not just commentary from the award-winning filmmaker, but rather a guiding principle.

Arrest after threats against embassy guard

Roller skating is back