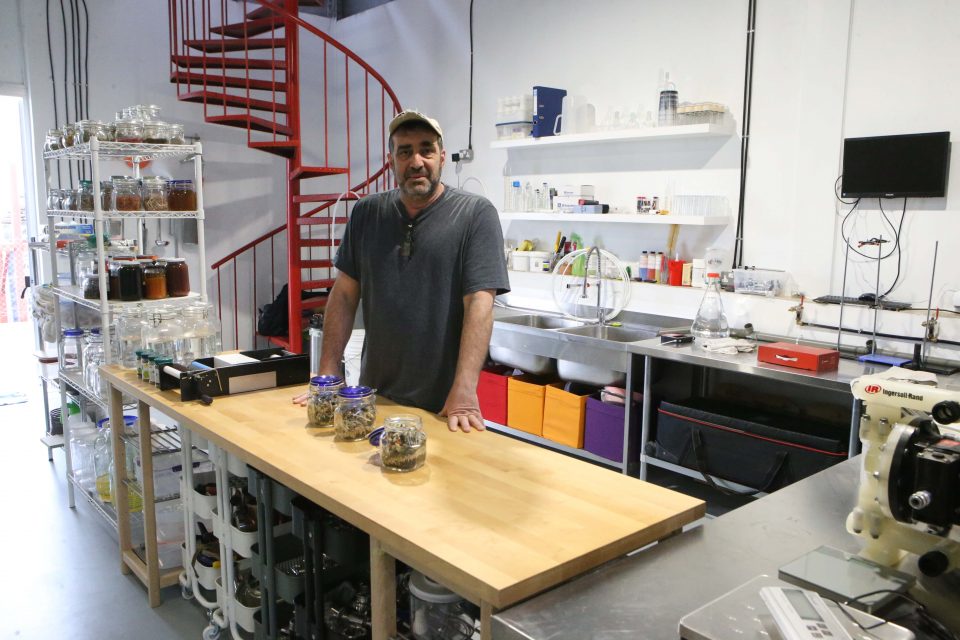 “You’ve got to tell your story,” says Aris Aristidou, co-founder (with his wife Marianna) of Aristides Distilling. That was his philosophy when he worked in the US, trying to get big chains to stock the liquor he made at a company called Copper Run just outside Branson, Missouri; that’s his philosophy now, in a warehouse in Tseri. Tell your story, explain what you’re trying to do – then you might be surprised, and maybe even “find allies in places where you never thought of looking”.

His story unfolds in this warehouse, a 150-square-metre space on the road to the highway – but his story is also a tale of audacious entrepreneurship in a place (and a sector) where a few big companies have always predominated. This is the first craft distillery in Cyprus, producer of a dry gin called Aoratos (the word – which means ‘invisible’ – is also the village term for juniper berries, gin’s most distinctive ingredient) and more projects also in the works, all with local ingredients. Rum made with carob molasses, vodka from our “world-famous potatoes”, single-malt whisky from the grain that’s already being planted specially for the distillery. 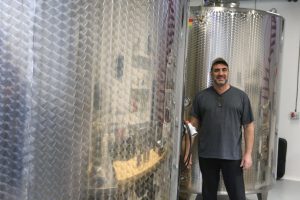 This is not a big space, or a big business; Aris does the distilling, Marianna’s on the marketing side (as well as being “a grounding force and the real organiser of the operation,” as per her husband). Yet the warehouse is decked out with equipment, even apart from the holding tanks and state-of-the-art still. Here’s a diaphragm pump, he explains, it has no moving parts so it won’t ignite the alcohol. Over here is a Soxhlet extractor, he stuffs it with botanicals and alcohol and tries out permutations when working on his recipes. Here’s his “library” of herbs and extracts, a row of jars sitting on a shelf like an alchemist’s potions; here, he adds – proffering a bag for me to sniff – is the mix he prepared for Aoratos. So what’s in it? “Well, there’s eucalyptus leaves, there’s sage, ironwort, coriander. There’s juniper, bitter orange peel, there’s nettle leaves…”

The still is his pride and joy, a “next-generation still” that can store and remember recipes; Aristidou has an Engineering background – plus some years in IT consulting – and thrives on tech just as much as botanicals. He’s a big man in his mid-50s, with a teacher’s authoritative manner (easy to see how he might’ve been a good fit for consulting) and what seems like a natural restlessness. Office life doesn’t work for him, he sighs; he needs physical activity, and doing things with his hands (He used to make halloumi as a hobby back in Missouri, and smoked his own lountza). Cyprus didn’t always work for him either. He grew up here, but moved to the US to study and has tried coming back twice before – in the early and late 90s – lasting just a few years each time.

Founding a distillery wasn’t his only reason for coming back a third time (“Family reasons,” he says vaguely), but hopefully it’ll make this sojourn more successful than the two previous ones – though he won’t stay for good, he insists, and definitely plans to go back when the time comes to retire. Aristides Distilling is the project of his middle age, giving something back to the motherland – not to mention celebrating local produce that too often goes unexploited.

Almost everything in Aoratos Gin is local, though Aristidou still has to supplement the juniper berries with some from abroad; an adjacent warehouse contains about 30 little plant pots of juniper berries, which he now has permission to plant near Kionia for use in the next batch. Peel from various citrus fruits – bergamot, pomelo, Seville orange – fills plastic boxes. He unseals jars and I take little sniffs of plantain and ‘shinnos’, the fruit of the mastic tree. He talks excitedly of six-row barley (apparently we’re the only EU country still producing it; everyone else sows two-row barley) and using its enzymes to ferment those world-famous potatoes, in the vodka he’s planning to make. 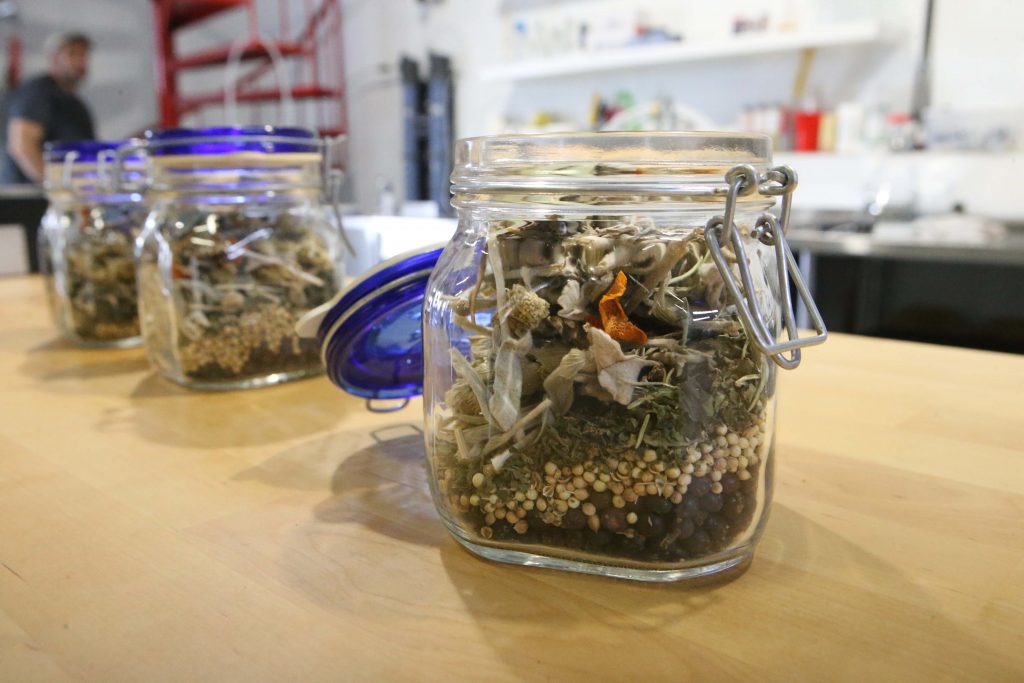 Cyprus vodka has a bad rep, of course – and with good reason. Stacked along a wall of the warehouse are big plastic tanks of a clear liquid: this is NGS, neutral grain spirit, a stop-gap measure he’s been forced to take while waiting for his own grain to grow. (They’re harvesting in the summer, and malt – i.e. half-germinated seeds – will be produced in November.) The business won’t be fully operational till next year, when Aristidou starts making his own malt and using that in the fermentation process; in the meantime he’s using good-quality NGS, which of course he re-distils and mixes with botanicals – but it’s also possible (if very inadvisable) simply to dilute NGS, and make liquor with that. This is what small producers used to do, making cheap-and-cheerful trash for the Ayia Napa market – and helping to create a general mindset that, beyond the boring but reliable big brands, Cyprus spirits are a joke compared to their foreign counterparts.

This is the challenge for Aris Aristidou, not just building a modern craft distillery but convincing punters to give him a chance. “Anybody who wants to visit can come and check it out,” he says of the warehouse in Tseri, hoping that a look at his set-up will be enough to make the case – but it’s not just the set-up, it’s Aris himself. “I’m here every step of the way.” 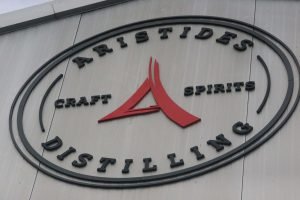 He visits his suppliers often (they include Yiannoulla Lazarou in Korakou, who’s apparently quite famous in the field of organic botanicals), “so I know what they’re using and what they’re not using”. He tinkers endlessly, working on recipes; there’s even a row of fruit jams on the shelf of his lab (“Experiments…” he shrugs when I ask). He filters water, stripping out all the bad stuff. He talks to stakeholders, and works on the company website. “One of the things that differentiates craft distilling is that we control everything,” he explains. Big companies can’t always control the temperature of the yeast, for instance (their fermentation tanks are too large), but he can; there’s a sensor in the tank, sending out a Bluetooth signal. He’s a true entrepreneur, overseeing every aspect of his business.

Will that be enough to make the distillery a success? Hopefully. Meanwhile, all he can do is tell his story, and try to find allies (and discerning drinkers) where he can. “I don’t know what’s going to happen,” admits Aristidou. “For the time being, the only thing I’m focused on is proving to everybody that good things can come out of this island – once you focus on making them good, instead of making them cheap!” Amen to that.

Motorcyclists to protest on Friday