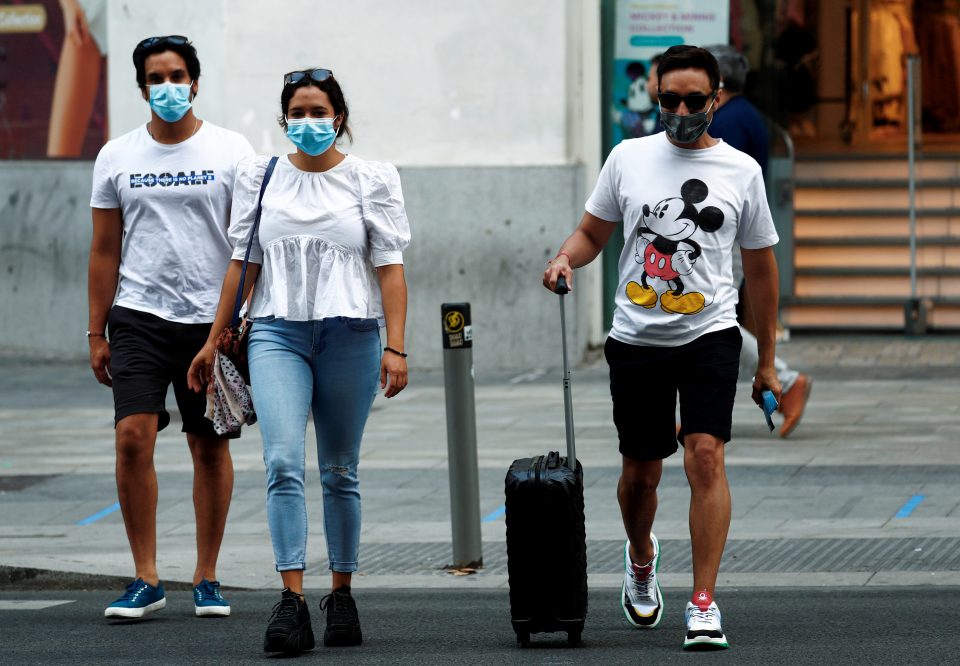 Spain became the first country in Western Europe to register 500,000 coronavirus infections on Monday, after a second surge in cases that coincided with schools reopening.

Health Ministry data showed a total of 525,549 cases, up from 498,989 on Friday, and 2,440 infections registered in the last 24 hours. Spain updates its data retroactively, so the latest numbers could be revised.

Recent infections have been more common among younger people who often develop no symptoms thanks to their stronger immune systems, and the death rate remains far below the March-April peak when daily fatalities routinely exceeded 800.

A British government minister said on Tuesday that a rise in the number of COVID-19 cases in the country was concerning and he called on people to follow health guidance or risk tougher restrictions in the coming months.

“There’s a big burden on all of us now to follow the guidance as closely as we can or else we do risk greater restrictions later this year,” housing minister Robert Jenrick told Sky News television.

Other top government officials have also expressed concern about a rise in the number of COVID-19 cases in recent days.

There were almost 3,000 reported cases on Monday in the UK.

The number of confirmed cases of COVID-19 in France rose again compared with the previous day, as did the death toll, as the country battles to contain a likely second wave of the virus.

The number of new, confirmed COVID-19 cases had risen by 4,203 compared with the previous day to reach a total of 328,980, the French health ministry said on Monday.

Ukraine registered a record 57 deaths related to the new coronavirus in the past 24 hours, the national security council said on Tuesday, up from a previous record of 54 deaths registered last week.

India recorded its highest daily deaths from the coronavirus in more than a month on Tuesday, even as new infections slowed, data from the health ministry showed.

India surprassed Brazil on Monday to become the country with the most number of coronavirus cases outside of the United States and has a cumulative caseload of 4.28 million.

Plans to reopen Bali to foreign tourists from September have been postponed indefinitely, while Thailand’s proposal for the cautious reopening of Phuket island has come into doubt.

As well as trying to encourage domestic tourism industries, some Southeast Asian countries have been considering “travel bubbles” with others as a way to get businesses restarted.

Bali initially appeared to weather the health crisis better than other parts of Indonesia, which has suffered Southeast Asia’s biggest death toll by far. But coronavirus cases have spiked after it reopened its borders to domestic tourism at the end of July.

“Increasing domestic tourism is one important factor for increasing cases in Bali,” said Dr Pandu Riono, an epidemiologist from the University of Indonesia.

Mexico reported 3,486 new confirmed cases of coronavirus infection and 223 additional fatalities on Monday, bringing its totals to 637,509 infections and 67,781 deaths, according to updated health ministry data.

The government has said the real number of infected people is likely to be significantly higher than the confirmed cases.

Brazil recorded 10,273 additional confirmed cases of the novel coronavirus in the past 24 hours, as well as 310 deaths from the disease, the Health Ministry said on Monday.

In all, Brazil has registered 4.15 million cases of the virus since the pandemic began, while the official death toll has risen to 126,960, according to ministry data.

Brazil has the third highest number of coronavirus cases. India, which has now registered 4.2 million cases, overtook Brazil in number of infections on Monday and is just behind the United States.

Argentina’s coronavirus death toll surpassed 10,000 on Monday, the government said, as the South American nation struggles to bring its infection rate under control.

There have been 10,129 deaths, with 488,007 confirmed coronavirus cases, according to government data. Almost half of coronavirus tests are yielding a positive result.

Argentina has been under lockdown since March 20, though cases have spiked in recent weeks. Some areas of the country, including capital Buenos Aires, remain under varying levels of quarantine, though some activities, like exercise and outdoor restaurant dining, recently resumed.

CORONAVIRUS AROUND THE WORLD

India, China accuse each other of firing in the air on tense border

Serena remains on course for grand slam record at US Open