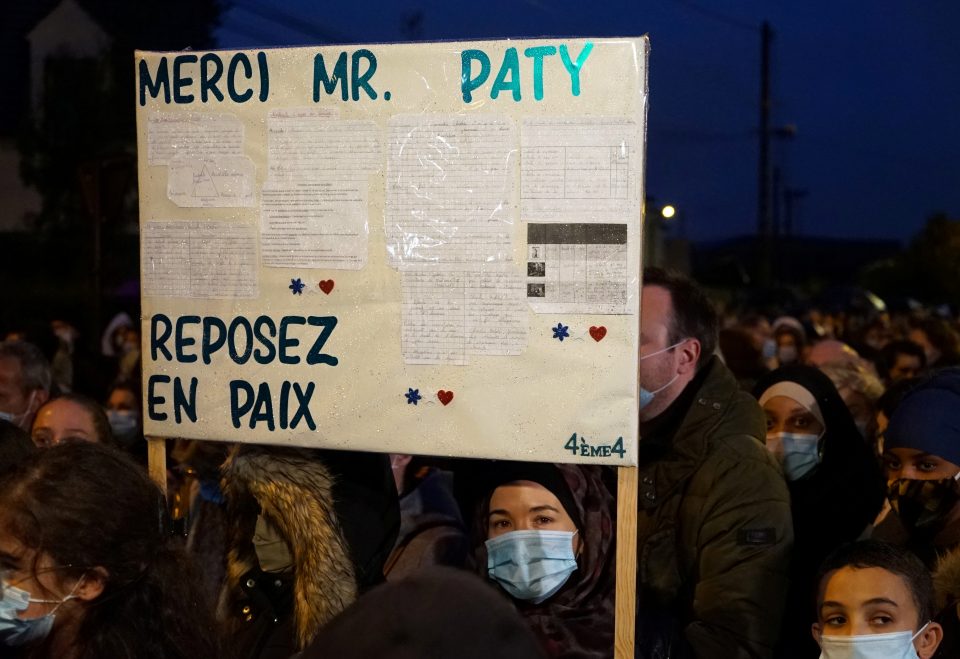 Schoolgirls hold a placard which reads "Thanks Mr Paty, rest in peace," as they attend a silent march to pay tribute to Samuel Paty

Seven people, including two minors, were handed over to a judge overnight as part of an ongoing investigation into last week’s murder of French teacher Samuel Paty, an official from the anti-terrorist prosecutor’s office said.

Paty was beheaded on Oct 16 in broad daylight outside his school in a middle-class Paris suburb by an 18-year-old of Chechen origin. Police shot the attacker dead.

Investigators say the teenager had sought to avenge his victim’s use of caricatures of the Prophet Mohammad in a class on freedom of expression. Muslims believe that any depiction of the Prophet is blasphemous.

A school parent who had posted a video accusing the teacher of using the caricatures in class was among the seven presented to the judge.

Richard Ferrand, speaker of the lower house of parliament and a former teacher, told BFM television that parents should “stay out of schools and leave teachers alone. One must hand back full authority to the teachers.”

Prosecutors have said the attacker had approached pupils outside the school asked them to identify Paty as he left for home.

Two of those pupils were among those presented to the judge, as was Islamist militant Abdelhakim Sefrioui from the Cheikh Yassine Collective, whose closure could be decided later in the day by the French cabinet.

The murder shocked France, and carried echoes of the attack five years ago on the offices of satirical magazine Charlie Hebdo, after the magazine had also published cartoons of Prophet Mohammad. Public figures called Paty’s killing an attack on the Republic and on French values.

French regional newspaper La Nouvelle Republique has received threats on social media after it published a caricature of the Prophet Mohammad on its front page, one of its journalists said on Wednesday.

A national tribute in honour of Paty will be held at the Sorbonne university in Paris on Wednesday.