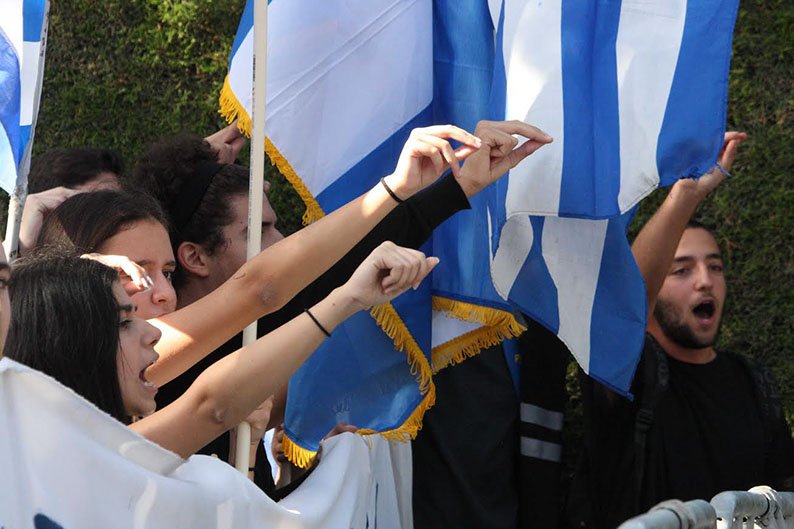 Truncated reality, the annual student demonstrations on the UDI anniversary in the north

Despite the growing impression that we can get on with our lives without being affected by it, the Cyprus problem leaves no aspect of our existence untouched. The case of those born after the events of 1974 illustrates the paradox. For the post-1974 generations, the Cyprus issue is both spectre and reality; ghost and materiality.

Let me illustrate what I mean. For a 27-year-old born in the south of the island, the north – its towns, villages and landmarks – are less like real places and more like ideas or abstracted concepts. They have been defined more in terms of nationalist propaganda (think elementary school textbooks) and as settings of violent conflict than sites of personally lived experience. At best, the places in northern Cyprus are constructed solely in one’s imagination, with the help of parents’ or grandparents’ stories and memories, some fond, others bitter. At worst, they become catalysts of hate and bigotry, hollowed-out nationalist symbols that ignore the status of the sites in question as real-life geographic locations with a complex history spanning centuries.

Despite the opening of the checkpoints in 2003, a surprisingly large part of the population born after 1974 continues to have only a spectral, or abstract, understanding of the occupied north as place. I respect the choice of people not wanting to cross through to ‘the other side’. The side effect of this refusal on our collective capacity to grasp the island as a whole, however, is all too real, whether it is justified or not, and it inevitably affects the extent of our openness to a potential solution.

At the same time, for people born after 1974, the fact of occupation has always been in a very real way experienced on a daily basis: the TRNC flag on the Pentadaktylos mountain range visible day and night; the NO ENTRY signs of the buffer zone; the walls of barrels and sandbags next to cafes in the walled city of Nicosia; the sight of the blue berets of UN soldiers and their trucks; the annual student demonstrations on the anniversary of the north’s unilateral declaration of independence, and the trite language in the archbishop’s Easter message wishing for Cyprus’ own ‘resurrection’ year after year after year.

The result of this double but concurrent vision of the island is that our image of the ‘other side’ coincides with a lived, felt, seen experience of one’s ‘own side’ that could not have emerged in the absence of the Cyprus problem. This is our reality and its materiality: ‘our part’ is perceived as a whole.

The symbols and symptoms of occupation that pervade our everyday life have become banal. They are a matter of fact. No amount of political rhetoric (on the left or right) can shake the lulling effect of a comfortable life lived despite these symptoms and in the midst of them. With this banality comes an eerie certainty of the permanence of the only configuration of the island we have known: that of division.

Our certainty of this permanence is aggravated by the fact that we have had to endure 40 plus years of political tension and failed negotiations, which take a heavy toll on the public and critical discourse as well as on our collective psychology.

For the most part, this is the source of our hopelessness. This peculiar, inimitable condition of growing up on an island where the agreed upon remedy of our political plights, a solution, is constantly pursued but always deferred. Despite the mouths that keep uttering the desire of reunification and peace on TV, in cafes, at dinner tables, on the radio, in the House of Representatives and on the street, four decades of failed attempts and nationalist politics have convinced us that a solution is impossible. That every new negotiation is doomed to end in failure. ‘I hope they solve it’ is almost always accompanied by ‘No way’ or ‘There’s no chance.’

Deep in our guts it seems that we have decided that we are bound to live and die on an island that looks, sounds, feels exactly the same way as it did when we were born: divided, afraid and stunted. Deep in our guts is a hopelessness meticulously planted there by a political stalemate that benefits a few but ultimately hurts most of us.

#UnitedByHope has been embraced by some as the slogan of support for the most recent round of negotiations, which culminated this week in Geneva. Some have written about its inefficacy, outlining that hope is not enough, that we kid ourselves by using a hashtag that glosses over the thousands of procedural, legal and social obstacles to a solution that exist on the ground.

A hashtag is never enough, that much is true. But is hope as dispensable as the detractors of #UnitedByHope make it out to be? Is it as useless, as trivial, as stupid as they claim?

No matter how radical or ‘out of touch’ it may seem, hope is an essential component of change. For a lot of us born after 1974, hope of a future in which our government is finally free to focus on education, technology, culture and social welfare is one of the few things that keeps us around. Without any memories of homes and villages to return to, hope of a future that we do not know, but are thirsty to find out, is the impetus that keeps us active and sane, even at times when everything around us seem absurd.

The unpredictability of change is not a certain catastrophe, as the rejectionist camp tries very hard to convince us on a daily basis. That goes against the term’s definition. Unpredictability and risk can also be a positive force, if they are a result of a well-planned, bona fide agreement for Cyprus that has the best interests of the island’s people at heart.

The post-1974 generations need a threshold moment, an opening that will offer a glimpse of a better life, if we are to keep the island we love alive. Here’s to shamelessly and defiantly hoping that the progress achieved this week in Geneva will finally lead to that.

Balancing principles, interests and feasibility in the Middle East

Religion the last castle to fall