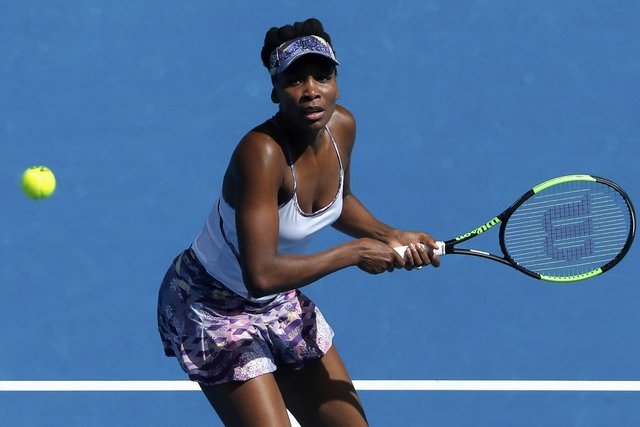 Venus hopes to win an eighth major title, first in Melbourne and first since Wimbledon in 2008

Serena and Venus Williams rolled back the years as they swept through their last four clashes to set up a retro family final at the Australian Open on Thursday, their ninth meeting in a grand slam title-decider.

Younger sister Serena saved her sentiment for after her semi-final as she ruthlessly brought an end to the dream run of Mirjana Lucic-Baroni at Melbourne Park, thrashing the 34-year-old Croatian 6-2 6-1.

Venus had a much tougher time on Rod Laver Arena and needed to draw on the experience of 73 grand slam campaigns to rally from a set down for a 6-7(3) 6-2 6-3 victory over fellow American Coco Vandeweghe.

The 36-year-old, who lost to Serena in her only previous Australian Open final in 2003, can expect sentiment to play little role in Saturday’s title-decider either but Thursday was all about family pride.

“For us both to be in the final is the biggest dream come true for us,” said Serena, a year her sister’s junior.

“She’s my toughest opponent, no one has ever beaten me as much as Venus has. I just feel like no matter what’s happened we’ve both won … A Williams is going to win this tournament.”

Although Serena has returned from four months out with a shoulder injury and Venus has ended a eight-year grand slam final drought, Lucic-Baroni’s fairytale return to the top table of tennis after years in the wilderness trumped them both.

A doubles champion at Melbourne Park as a 15-year-old, Lucic-Baroni’s career had gone into a tailspin on the back of trauma in her personal life before she battled back to reach Thursday’s semi-final as world number 79.

Her left leg a swathe of strapping, she came out firing winners as if her life depended on it but she was simply unable to stay with the world number two at her brutal best in the 50 minute contest.

The six-times champion was all but untouchable when her first serve hit the mark and sealed the win when Lucic-Baroni smashed a forehand into the net, the American reaching her 29th grand slam final where she will bid for a 23rd major title.

Serena gave her opponent a huge hug at the net before watching on smiling as Lucic-Baroni took a selfie as a memento of her day in the sun.

“Honestly she’s inspiration, she deserves all the credit today,” said Serena. “Everything she’s gone through, she inspires me.”

Venus needed almost three times as long to overcome world number 35 Vandeweghe, who broke the 13th seed on her first service game and won the opening set on a tiebreaker.

The 25-year-old’s hopes had rested on the accuracy of her serve and booming winners but her challenge faded as the unforced error count racked up — she made 51 overall — and her first serve percentage hovered around the 55 percent mark.

The key to Venus’s victory, though, was her ability to raise her game when it mattered and the seven-times major champion saved 12 of 13 break points she faced, seven in the second set alone.

Venus danced around the court in breathless delight at her victory and gave the crowd an elaborate version of her traditional twirl, having ensured she would become the oldest Australian Open women’s finalist in the professional era.

“Everyone has their moment in the sun,” Venus added. “Maybe mine has gone on a while but I’d like to keep that going. I got nothing else to do, let’s keep it going.”

Vandeweghe was visibly upset at losing her first grand slam semi-final, indulging in a “feel-sorry-for-myself moment” as she described it.

“But you have to give credit where credit’s due,” she added. “My opponent played better than I did today when it mattered in the clutch points.”

Confident Kenin keen to take the fight to Muguruza