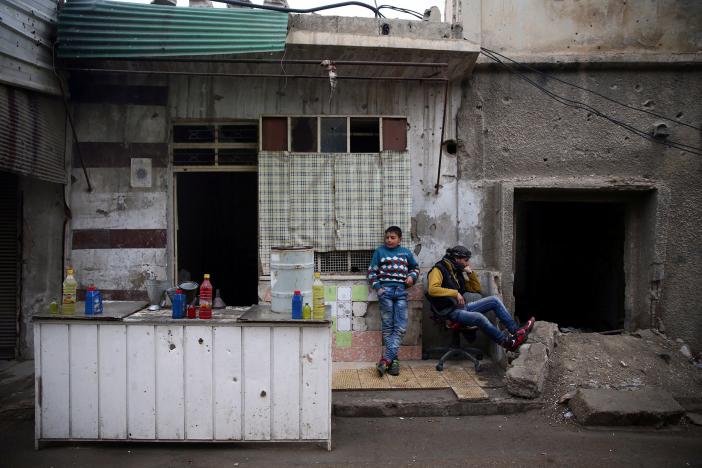 People stand near a fuel stand in the rebel held besieged city of Douma, in the eastern Damascus suburb of Ghouta, Syria February 12, 2017

Syrian jihadists seen as close to Islamic State battled a rival hardline Islamist faction on Monday in north-western Syria, a war monitor and an official with another insurgent group said, in an escalating power struggle.

Jund al-Aqsa and Tahrir al-Sham clashed around Kafr Zeita in the countryside north of Hama, and near Tamaniaa, Khan Sheikhoun and Tal Aaas in southern Idlib Province, said the Syrian Observatory for Human Rights, a Britain-based war monitor.

An official with a rebel group that fights under the banner of the Free Syrian Army (FSA), which was not involved in Monday’s confrontations, confirmed the fighting.

The main conflict in Syria‘s civil war pits President Bashar al-Assad, backed by Russia, Iran and Shi’ite militias, against an array of rebel groups aiming to oust him, including some that have been backed by the US, Turkey and Gulf monarchies.

Since the army took Aleppo in December, some of the many armed groups in the northwest have consolidated into factions that are now fighting each other for control of territory and resources.

Tahrir al-Sham was formed in January from a merger of Syria‘s former branch of al Qaeda, previously known as the Nusra Front and Jabhat Fateh al-Sham, along with several other Islamist groups

Jund al-Aqsa and Fateh al-Sham fell out late last year despite having previously aligned with each other, and insurgent sources and the Observatory say Jund al-Aqsa’s ideology is closer to that of Islamic State group, al Qaeda’s main jihadist rival.

Both Tahrir al-Sham and Jund al-Aqsa are also fighting against an alliance of another Islamist group, Ahrar al-Sham, and rebel factions fighting under the FSA banner. Jihadist groups attacked the FSA for sending delegates to peace talks in Kazakhstan last month.

Marchers across Mexico vent anger over Trump, and their own president