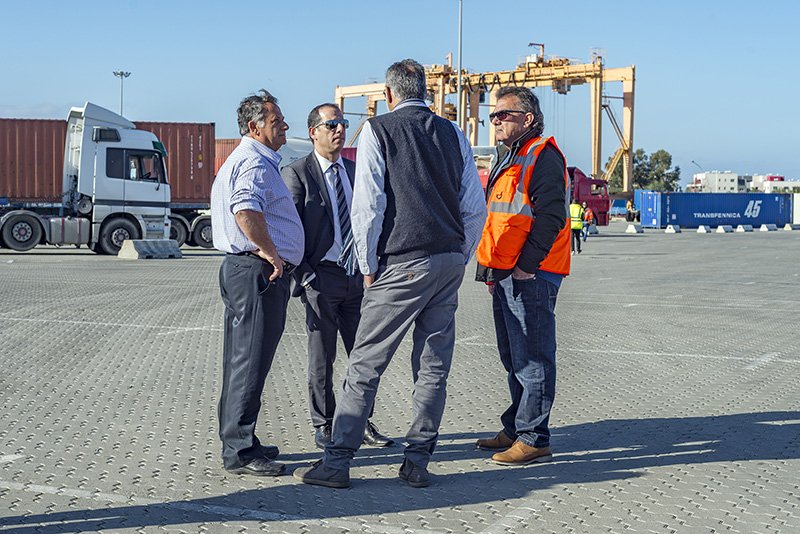 Marios Demetriades inspecting the changeover at Limassol port in February

STATE revenues from the privatisation of commercial operations at the port of Limassol will increase by more than 50 per cent compared to under the previous regime, the transport ministry said on Thursday, defending the concession agreements it signed with private companies.

“And this, without taking into account any estimate of increased turnover,” the ministry added.

It was responding to the findings of a special report by the auditor-general, released a day earlier, which opined that the government’s revenue estimates from the concession agreements are over-optimistic.

The ministry statement came amid calls from opposition parties on the transport minister to step down for bungling the port concession agreements.

The government expects to rake in some €2bn in the 25 years of the concession.

But the Audit Office noted that this depended heavily on the implementation of the contractors’ business plan, which assumes an improbable – according to the auditor-general – anticipated increase in cargo volume and transit at the port.

Based on the 2016 results and adding a three per cent annual increase for 25 years, the Audit Office said it expected the state to put between €826m and €1.4bn in its coffers.

In its rejoinder to the criticism, the transport ministry said that, over and above the direct concession payments to state coffers, business at the port will also benefit from equipment upgrades under the new privatised regime.

“Once again we stress the importance of this project [privatisation] to boosting and growing the country’s economy. The benefits in the long term will enhance the economy’s positive prospects.”

The ministry went on to cherry-pick the positive observations in the report, such as that the tenders invitation process was transparent, as well as the success of the tender, which attracted giants in the field.

But the ministry did not address a number of other issues flagged by the Audit Office.

The agreements stipulate that Eurogate (25-year contract) compensates the government with an upfront payment of €7.5m, a fixed concession fee of €7m, and a variable concession fee of 62.71 per cent on gross revenues.

And for DP World (25-year contract), the upfront payment is €2m, the fixed concession fee €2m, and the variable concession fee 52.1 per cent on gross revenues.

According to the Audit Office, anchorage fees have been hiked considerably since the handover to the private operators. Although short-term fees (under 24 hours) are much the same as those previously charged by the Cyprus Ports Authority (CPA), longer-duration fees have in some cases shot up by a factor of six or more.

The high fees could discourage ships from anchoring at the port, the Audit Office warned.

Another problematic clause relates to the fees to be paid by the United Nations Interim Force in Lebanon (Unifil) for use of the port.

Under the previous contract between the CPA and Unifil, the latter paid €3.5m annually.

But under the concession agreement, henceforth the state is to collect 52 per cent of the above amount, with 48 per cent allotted to the private operator.

In its investigation, the Audit Office also addressed allegations that, despite the port’s privatisation, loading/unloading operations were not being carried out round the clock, but rather from 7am to 5pm.

Citing data provided by the government, the auditor-general said it seemed that loading/unloading activities took place throughout the day, including at night, so the allegations did not stand.

It added, however, that the data provided to it on this point was incomplete.

Weighing in, main opposition Akel asserted that the privatisation of Limassol port was a “scandal of massive proportions.”

In a statement, Akel MP Costas Costa said that “state wealth has been plundered…something which lays waste to the present administration’s ideological fixation with privatising state assets.”

Costa blamed the minister responsible – transport minister Marios Demetriades – for the raw deal, and called for his resignation.

“At the same time, we demand a disciplinary probe into the transport ministry, and we ask that the auditor-general’s report be forwarded to the attorney-general to look into possible criminal liability.”

Results of passport probe to be issued piecemeal