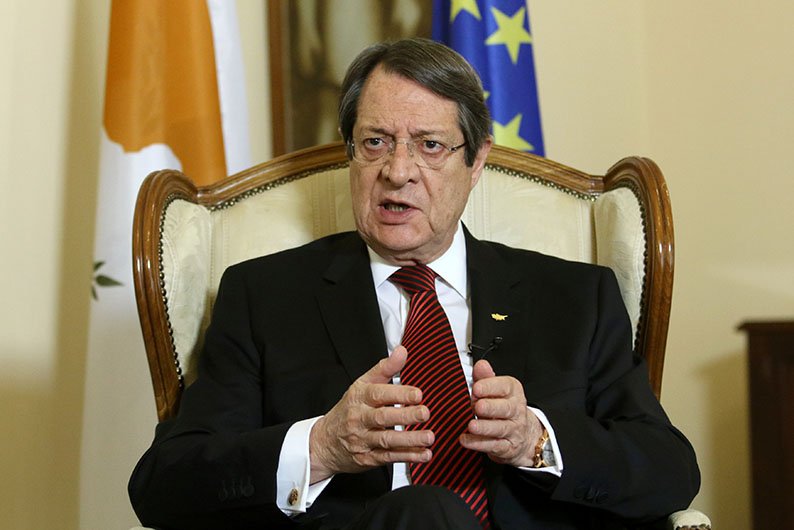 PRESIDENT Nicos Anastasiades said on Friday he would not be willing to put any peace deal to a popular vote unless he was convinced a blueprint to reunite estranged Greek and Turkish Cypriots would work.

In an interview with Reuters, Anastasiades also said a lasting deal would be in the interests of Turkey, which has maintained troops in the north since it invaded in 1974.

Anastasiades and Turkish Cypriot leader Mustafa Akinci will resume peace talks on April 11 after a two-month interruption following a controversial bill pushed through by nationalists parties in parliament, with United Nations mediators hoping that the resumption will lead to a deal which would then be put to referendum.

“If I am not satisfied that what we are trying to achieve meets our expectations, and (those of) both communities, then I would not be willing to put it before the people,” said Anastasiades, whose five-year term ends next February. He has not said if he will stand again.

“It must be a balanced deal, which doesn’t create the feeling of … one side winning over the other.”

The subsequent stalemate has been a source of tension between NATO allies Greece and Turkey and an obstacle to Turkey’s ambitions to join the European Union.

Led by Akinci and Anastasiades, the two sides are now trying to forge a new partnership based on a federation.

Recent hydrocarbons discoveries in the eastern Mediterranean, where energy potential has not been fully developed, are another incentive to find a deal.

“We have excellent relationships with our neighbours,” said Anastasiades. “A possible solution on Cyprus would facilitate Turkey’s plans, either concerning supplies in its internal market, or converting Turkey into an energy hub.”

Regarded as a moderate, Anastasiades has frequently tried to temper expectations of a quick fix to divisions that have defied many previous mediators.

“There might be other opportunities, but the issue there is what solution it would lead to,” he said.

“In any case that doesn’t depend on the Greek Cypriot side … It depends on the resolve and the sincere intent also of the other side.”

Turkey, whose role in a post-reunification Cyprus remains a highly sensitive issue in the talks, will hold a referendum on April 16 on boosting the powers of President Tayyip Erdogan.

Anastasiades said he didn’t want to speculate how a victory in that vote for Erdogan might affect the Cyprus talks, but said he was concerned at friction emerging between Turkey and Europe.

“I believe that after the referendum a restoration of relations will be sought. But I’m not sure that will be enough,” Anastasiades said.

“Now it appears there are basic differences in philosophy from European perceptions and those of President Erdogan.”

Running a red light on the rise

Negotiations focus only on technical committees

Resumption of talks impossible if Turkey keeps up provocative actions