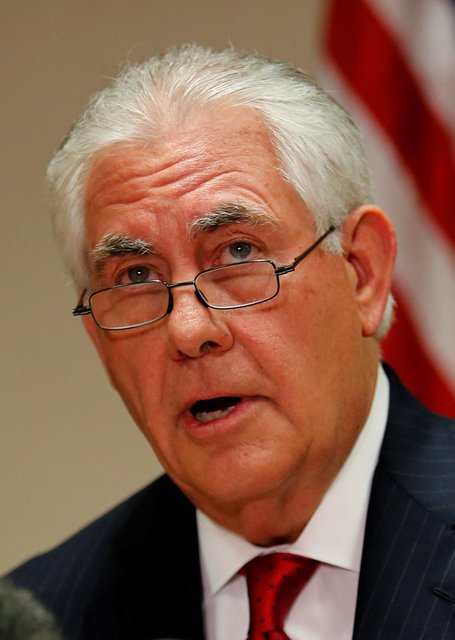 US Secretary of State Rex Tillerson

By Steve Scherer and Andrew Osborn

US Secretary of State Rex Tillerson carried a message from world powers to Moscow on Tuesday denouncing Russian support for Syria’s Bashar al-Assad, as the Trump administration took on America’s traditional mantle as leader of a unified West.

Tillerson flew on the administration’s first cabinet mission to Russia after meeting foreign ministers from the Group of Seven advanced economies and Middle Eastern allies in Italy. They endorsed a joint call for Russia to abandon Assad.

The administration of President Donald Trump, which came to power in January calling for warmer ties with Russia, was thrust into confrontation with Moscow last week when a poison gas attack in northern Syria killed 87 people.

“It is clear to us the reign of the Assad family is coming to an end,” Tillerson told reporters in Italy before departing for Moscow. “We hope that the Russian government concludes that they have aligned themselves with an unreliable partner in Bashar Al-Assad.”

He said Russia had failed in its role as sponsor of a 2013 deal under which Assad promised to give up his chemical arsenal.

“These agreements stipulated Russia as the guarantor of a Syria free of chemical weapons,” Tillerson said.

“It is unclear whether Russia failed to take this obligation seriously and whether Russia has been incompetent. But this distinction doesn’t much matter to the dead. We can’t let this happen again.”

Russia says the chemicals that killed civilians belonged to rebels, not to Assad’s government, and has accused the United States of an illegal act of aggression against Syria on a phoney pretext. Putin said on Tuesday he believed Washington planned to launch more missile strikes, and that rebels were planning to stage chemical weapons attacks to provoke them.

“We have information that a similar provocation is being prepared … in other parts of Syria including in the southern Damascus suburbs where they are planning to again plant some substance and accuse the Syrian authorities of using (chemical weapons),” Putin said, standing alongside Italian President Sergio Matarella who was in Moscow for talks.

“Russia’s allegations fit with a pattern of deflecting blame from the (Syrian) regime and attempting to undermine the credibility of its opponents,” a White House official said.

The United States, Britain and France have proposed a revised draft resolution to the 15-member UN Security Council that is similar to a text they circulated last week pushing Syria’s government to cooperate with investigators, diplomats said.

The secretary of state’s role as messenger for a united G7 position is a turning point for Trump, who in the past alarmed allies by voicing scepticism about the value of US support for traditional friends, while calling for closer ties with Moscow.

Tillerson is a former boss of oil company Exxon Mobil which has gigantic projects in Russia. He was awarded Russia’s “Order of Friendship” by Putin in 2013.

He is due to meet Russian Foreign Minister Sergei Lavrov in Moscow on Wednesday. The Kremlin has said Tillerson has no meeting scheduled with Putin this trip, although some Russian media have reported such a meeting may nevertheless take place.

“I think we have to show a united position and that in these negotiations we should do all we can to get Russia out of Assad’s corner,” German Foreign Minister Sigmar Gabriel said.

Britain floated the idea of tightening sanctions on Russia, initially imposed in 2014 over its annexation of territory from Ukraine, although no such step was agreed at the G7 meeting. France said it was not discussed in depth.

Western countries have been calling for Assad to leave power since 2011, the start of a civil war that has killed at least 400,000 people and created the world’s worst refugee crisis.

Assad’s position on the battlefield became far stronger after Russia joined the war to support him in 2015. The United States and its allies are conducting air strikes in Syria against Islamic State, but until last week Washington had avoided targeting forces of Assad’s government directly.

The United States said its strike on the Syrian airbase near Homs on Friday was a one-off and not a strategic shift. But the White House has also said Trump could authorise more strikes if Syria uses chemical weapons again.

“When you watch babies and children being gassed, and suffer under barrel bombs, you are instantaneously moved to action,” he said. “I think this president’s made it very clear that if those actions were to continue, further action will definitely be considered by the United States.”

Retaliating for barrel bombs would require a major shift in US policy since rebels say the weapons are used almost daily.

Syria has always denied using barrel bombs, though their use has been widely recorded by UN investigators. A source in the Syrian military denied it used them on Tuesday.

The US missile strike increased expectations that Trump would adopt a tougher stance with respect to Russia, and engage more actively in world affairs instead of following the more isolationist position associated with some of his advisers.

Until the chemical attack, Trump had said Washington would no longer act as the world’s guardian, especially if it was not in the interests of the United States.

Trump’s previous warm words for Russia were an issue at home, where intelligence agencies accuse Moscow of using computer hacking to help him win last year’s presidential election. The FBI is investigating whether Trump campaign officials colluded with Moscow, which the White House denies.

On Monday, Tillerson visited the site of a World War Two Nazi massacre in Italy and said Washington would never let such abuses go unchallenged.

“We rededicate ourselves to holding to account any and all who commit crimes against the innocents anywhere in the world,” Tillerson told reporters in Sant’Anna di Stazzema.