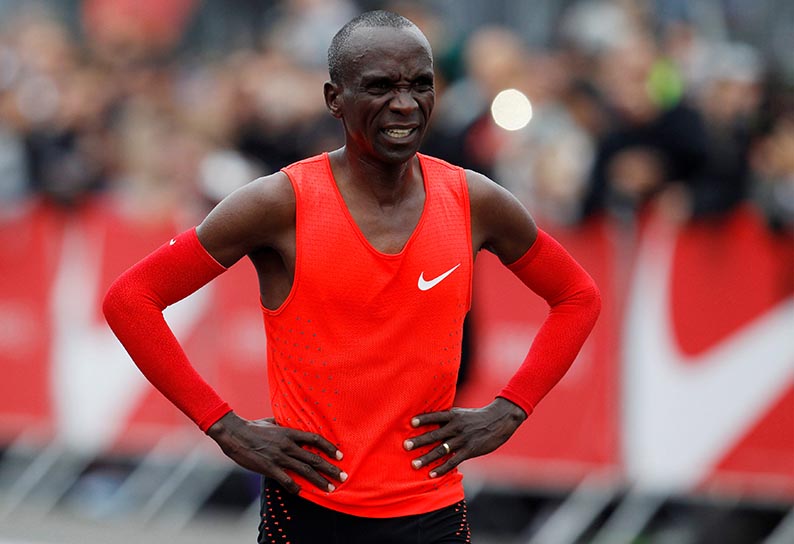 Kenyan Eliud Kipchoge reacts after crossing the finish line during an attempt to break the two-hour marathon barrier at the Monza circuit in Italy, May 6, 2017. REUTERS/Alessandro Garofalo

ELIUD Kipchoge ran the quickest recorded marathon on Saturday, crossing the line at the Monza Formula One track in two hours and 25 seconds but missing out on an ambitious attempt to break the two-hour barrier.

The 32-year-old’s time smashed the official mark of 2:02:57 set by fellow Kenyan Dennis Kimetto in Berlin in 2014 but will not enter the record books largely due to a non-compliant system of pacemaking.

“This is not the end of the attempt of runners on two hours,” the Olympic champion said after the race, likening the challenge to climbing a tree. “When you step on the branches… immediately you go to the next one.”

Kipchoge rated it as the finest performance in a career that includes a gold medal at the Rio Games last year and a personal best official time of 2:03:05, the third-fastest in history.

Kipchoge and the only other competitors, Eritrean Zersenay Tadese and Ethiopian Lelisa Desisa, ran behind an arrow-head formation of pacemakers, to reduce drag, and a car beaming a green line on the road behind it to show the required speed for the sub-two hour target.

Amid deep scepticism, Nike pitched the attempt as sport’s “moon shot”, with a keen eye on sales of its running shoes. It designed a lightweight shoe, Zoom Vaporfly Elite, with a carbon-fibre insole as part of the meticulous preparations.

In 2014, “Runners World” magazine predicted a sub-two under normal race conditions would not happen until 2075, based on analysis of more than 10,000 top marathon performances.

The race began in pre-dawn gloom at a brutal speed behind pacemakers, who were world class runners in their own right, including former world champion middle distance runner Bernard Lagat of the United States.

A total of 30 pacemakers split into groups of six, taking turns to set a tempo in a race run 63 years to the day after Briton Roger Bannister became the first man to run a mile in less than four minutes.

The Monza track was chosen for its wide, sweeping curves, lack of undulation and cool, low-wind environment. The runners were also delivered essential fluids on the move by moped in order to prevent them slowing down at feeding stations.

The sub-two hour mark required a pace below four minutes and 35 seconds per mile, which the determined Kipchoge managed to match until falling behind the pace car in the last two laps of the 2.4 km circuit.

Kipchoge completed the first half of the race in 59:57, just one and a half minutes off the official half-marathon world record set by Saturday’s second-place finisher, Tadese.