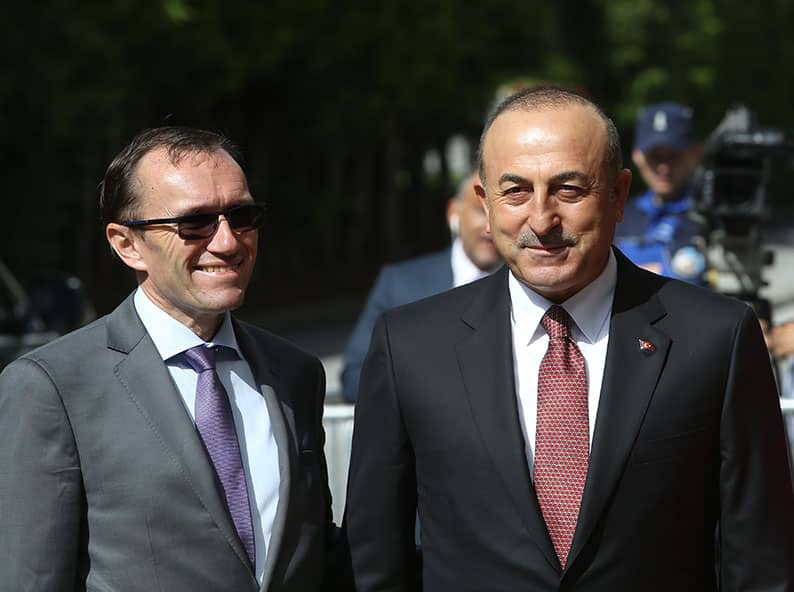 Turkish Foreign Minister Mevlut Cavusoglu said the failure of the Crans-Montans talks showed the impossibility of reaching a settlement within the parameters of the UN’s Good Offices Mission and there was “No use in insisting on them”.

In a series of tweets after the marathon working dinner ended in the early hours, Cavusoglu said it was important to maintain and increase stability on island and in region.

“We will continue efforts for a settlement within different parameters,” he said. Crans-Montana, he added had “unfortunately not produced any results”. “Turkey was very constructive but no agreement could be reached.”

Asked about the strategy to be followed from now on, the Turkish minister said the situation would be evaluated both by the Turkish president and prime minister.

Asked about the attitude of the Greek Cypriot side, he said unfortunately on the issue of guarantees and the troops, the ‘zero guarantees zero army’, he did not see any change coming from the Greek side. “Therefore, the full withdrawal of Turkish troops from the island and the elimination of Turkish guarantees was not an approach that could be accepted by either the Turkish Cypriot side nor by us,” he said.

Cavusoglu said that from the start, Turkey had said this was the last conference and it had been the UN secretary-general who had called a halt because he could see no light at the end of the tunnel.

“What will happen from now and what steps we will take, as I said earlier, we as Turkey will make our assessments and consult with the TRNC and will make the decision together,” he added.

The  Cyprus News Agency said that according to reliable sources, there was no result because of Turkey`s insistence on retaining the guarantees and on maintaining Turkish troops on the island.

On the guarantees and the right to intervention, Ankara wanted a review of the presence of troops in 15 years and not withdrawal, CNA said

On the territorial level, the Turkish side would only accept the return of part of Morphou to the Greek Cypriot constituent state, in an agreed federal solution.

Furthermore, Turkey wanted any agreement reached to become primary law of the EU while it insisted on equal treatment of Turks in Cyprus with Greeks residing on the island after a political settlement.

Spokesman says not the end of the road, blames Turkey for collapse