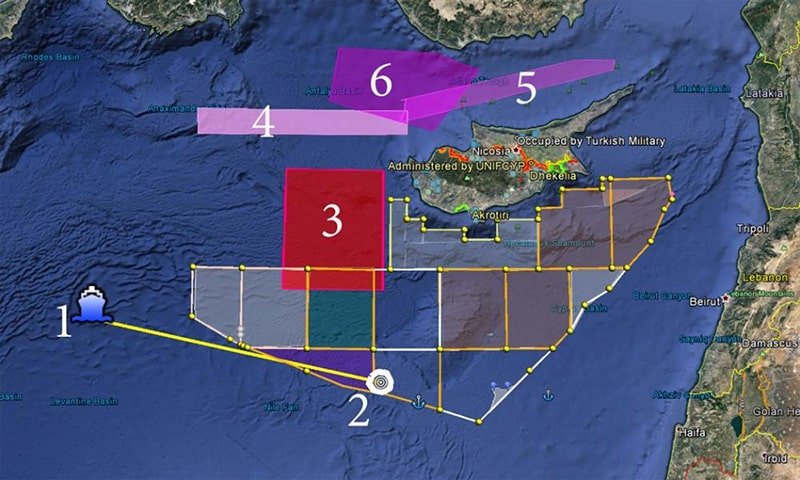 The drills and exercises sites

Military sources apprised of the matter told the Cyprus Mail there was no overlap whatsoever between Cypriot and Turkish marine activities.

“There is no cause for concern,” the sources said.

In the late afternoon, the drillship was just about to enter Egypt’s Exclusive Economic Zone (EEZ), on a slightly south-east bearing, after which it was expected to change course and turn north to reach the designated drilling site in Block 11 of the Cypriot EEZ.

The West Capella, leased by French oil company Total, was expected to arrive at the drilling location late on Tuesday night or early Wednesday morning.

Late on Monday evening, Turkey issued a Navtex (marine advisory) announcing naval exercises to be held on Wednesday and Thursday off the island’s west coast.

The advisory (Navtex 697/17) does not specify whether live ammo will be used.

The area reserved by Turkey begins at a distance of some 14 nautical miles off the Akamas, and covers parts of Cyprus’ offshore blocks 5, 6 and 7.

The area is the red rectangle number 3, shown in the diagram. The West Capella’s destination is point number 2.

Meanwhile a familiar cat-and-mouse game unfolded between Cyprus and Turkey.

Under a previous notice to mariners, the Turkish naval forces announced that Navtex 256/17 issued by the Republic of Cyprus was “null and void.”

Navtex 256/17 concerns a multinational search and rescue exercise scheduled for Wednesday and not far from the area reserved by Cyprus for the gas drilling operations.

The Turkish notice said the Cypriot Navtex had been broadcast by an “unauthorised station” -referring to the Larnaca Joint Rescue Coordination Centre.

“Par for the course… it’s just Turkey’s way of saying it does not recognise the Republic of Cyprus,” the military source said.

In the meantime, Turkey also issued three Notams (or notices to airmen) by which it reserved for exercises portions of the Nicosia Flight Information (FIR).

The first took place from 11am to 4pm on Tuesday in an area 100km long and 25km wide northeast of the island (area number 4).

The second Notam (number 5) extends from Apostolos Andreas to the Akamas peninsula and at a distance of some 25km from the island’s northern shores, from 11am to 4pm also on Tuesday.

And the third Turkish Notam (number 6) ‘reserved’ a section of the Nicosia FIR between the northern coast of Cyprus and the southern shores of Turkey, at an altitude of up to 20,000 feet.

In recent weeks and months, Turkey has reserved similar areas for air and search and rescue drills.

The Turkish drills are nowhere near the marine activities conducted by the Republic.

But certain media outlets, particularly in Greece, sought to sensationalise the situation, talking about an ‘escalation’ in the eastern Mediterranean.

The gas well to be drilled in Block 11, at a target dubbed Onesiphoros West-1, is located at some 180km off the island’s southern shores, and at a distance of just 8km from the boundary separating the Cypriot and Egyptian EEZs.

The drilling site is also approximately 40km from the Zohr super-giant gas field in Egyptian economic waters, where a 30-trillion-cubic-feet reservoir was discovered in 2015.

The West Capella drillship is expected to remain at the site for around three months.