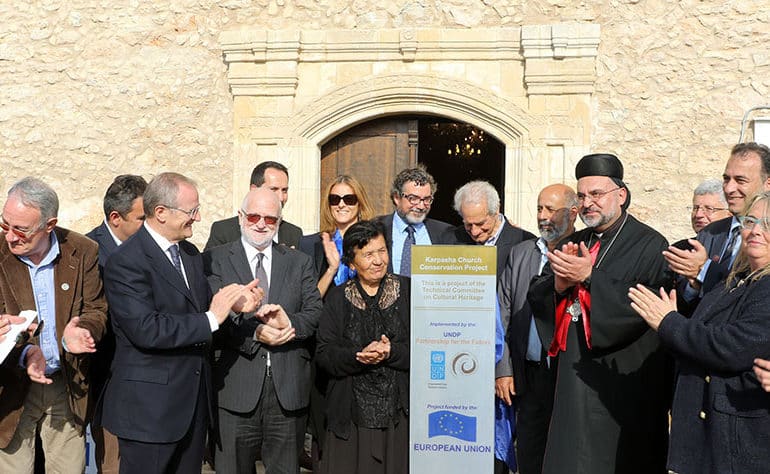 THE Turkish army’s decision to allow Maronites to return to their villages in the north is part of Turkey’s plan to ensure that such villages are not placed under Greek Cypriot administration after a solution and will create discord among refugees, government spokesman Nicos Christodoulides said on Wednesday.

The government’s negative reaction followed Turkish Cypriot leader Mustafa Akinci’s announcement earlier in the day that the villages would be opened up for settlement by their former inhabitants.

Akinci’s office said it would work with other civil and military authorities together with the Turkish ‘embassy’ in the north to coordinate works which will allow access to Maronite and mixed villages where Maronites and Turkish Cypriots used to live together. Authorities will work together to make the arrangements and draw up a roadmap for the decision to be realised fairly soon, the announcement said.

Ayia Marina, Asomatos and Karpasha are the three Maronite villages controlled by the Turkish military since 1974. Ayia Marina and Asomatos are currently totally off limits, while Karpasha is also under military control but residents are allowed to live there. The fourth Maronite village, Kormakitis, has no such status, and it is far easier for its residents to resettle there if they wish.

Maronites, along with Armenians, and Latins (Catholics) are considered religious groups, part of the Greek Cypriot community. Following the 1974 invasion, Maronites coming from these four villages opted to remain there as enclaved persons, though this was not allowed for Ayia Marina and Asomatos.

Christodoulides dismissed the move, saying it was nothing but a step in implementing Turkey’s plans, “part of which was the cause of the impasse (reached at the settlement talks held in Switzerland) in Crans-Montana”.

The aim, he said, is “the perpetuation of the unacceptable status quo caused by the Turkish invasion of 1974”, and an attempt to provoke discord among the refugees.

He added that it was also part of enforcing the Turkish position, expressed at the negotiations, that the Maronite villages would not be placed under the administration of the Greek Cypriot constituent state after a settlement.

“We call on Turkey to leave aside any communication games and to work constructively, and away from extreme and anachronistic positions, to put an end to the occupation and for reunification of our country,” Christodoulides said.

At the moment, around 200 Maronites, mostly pensioners, live in Kormakitis and Karpasha, of which 100 resettled there recently following a new support scheme announced by the Republic of Cyprus to encourage the enclaved to return to their villages in the north.

Wednesday’s announcement follows media reports earlier in the week that the authorities in the north would also allow the return of 16,000 refugees to the fenced city of Varosha in Famagusta plus 4,000 to Ayia Marina, Asomatos and Karpasha.

Media reports had said that this was one of the new unilateral steps Turkish Cypriots have begun planning following the collapse of the talks in Switzerland earlier in the month. Turkey said that it would seek another way on the Cyprus issue outside the parameters of the UN, speaking of a plan B.

According to the former parliamentary representative for the Maronites, Antonis Hadjiroussos, Wednesday’s announcement is a positive move, but he warned that the initial excitement might be followed by disappointment, as it would take a lot of money to rebuild the destroyed homes and construct infrastructure necessary for the day-to-day operation of the villages.

“It is a good move under the pre-condition that it will be supported by the Republic of Cyprus. If there is no support by the government or the EU, it will not be viable. There are no houses, no schools, no roads, or any other infrastructure,” Hadjiroussos told the Cyprus Mail.

But according to Maro Emmanuel, member of the bi-communal initiative for the resettlement of Ayia Marina – which was a mixed Maronite and Turkish Cypriot village – there are several people who said that they are ready to go back, even if they have to sleep in tents or caravans.

She also said that the struggle to resettle the village was sparked by the wish of a now 104-year-old woman, Vasilou, who is from Ayia Marina but now lives in Kotsiatis.

“She wants to go back to her village, to be buried there when she dies,” Emmanuel told the Cyprus Mail. Prompted by her dream, her son organised meetings on the issue and this led to the beginning of a struggle for the resettlement of Ayia Marina.

“This is something which, as a group, we have been asking for 20 years now,” Emmanuel said. She also explained how important the ties between a place and a community are, as, according to the findings of a conference last year, the Maronite community in Cyprus is on the verge of extinction, as they are scattered all over the island now and their identity is gradually fading away.

“This was one of our arguments, it is a way of keeping the community (from extinction),” she said.

She admitted that resettling the village would not be easy, as people have built their lives elsewhere, and they would also need a lot of money to rebuild their houses, but that the fact that the village is close to Nicosia helps.

Emmanuel said that initially those who choose to go back to Ayia Marina would have to rely heavily on the neighbouring village of Skylloura for supplies and services.

Our View: We abuse the UN at our peril