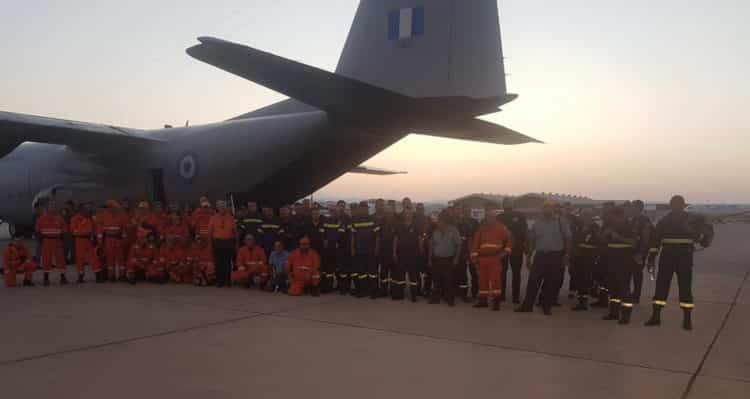 Sixty Cypriot firefighters who were meant to fly to Greece to help battle fires are not needed at the moment and will remain on the island, for now, the fire service said on Wednesday.

The firefighters were meant to fly to Greece on Tuesday evening but a mechanical problem on the Greek air force transport aircraft scuppered the plan.

According to fire service chief Marcos Trangolas, everything was ready, the necessary checks for staff and equipment had been carried out and the members of the fire service, civil defence, and the forest department were ready to fly to Athens when they were notified of the delay.

The team was expected to arrive in Athens where the officers were going to be briefed on how to assist the local authorities.

But in the meantime, Greek firefighters managed to bring the fires in Attica and Ilia under control during the night so it was decided to leave the Cypriot crews on standby for the time being.

The fire broke out on Sunday in Kalamos, a coastal holiday spot some 45 km northeast of the capital, and spread quickly to three more towns, stoked by strong and changing winds. By Wednesday it had destroyed thousands of hectares of pine forest and dozens of homes.

By the afternoon, the blaze had decreased in intensity and the perimeter contained by firefighters was expanding, Greek Fire Service spokeswoman Stavroula Maliri said.

Rugged terrain dotted with small communities had made the fire-fighting in the towns near Athens difficult, with winds rekindling the blaze at many spots.

Prime Minister Alexis Tsipras, who visited the scene on Wednesday, said Greece had “avoided the worst … and we have to be alert.”

Across Greece, firefighters were battling more than 33 forest fires, an outbreak fed by dry winds and hot weather that fanned blazes in the Peloponnese and on the Ionian islands of Zakynthos and Kefalonia.

Wildfires raging on the island of Zakynthos for six days were “improving,” Maliri said.

In the Peloponnese region of Ilia – the site of Greece’s worst fires in 2007 when more than 70 people died – blazes that broke out in three areas on Monday had been tamed.

“Today and tomorrow, the prevailing (weather) conditions favour the onset and development of forest fires in several regions across Greece,” Maliri added.