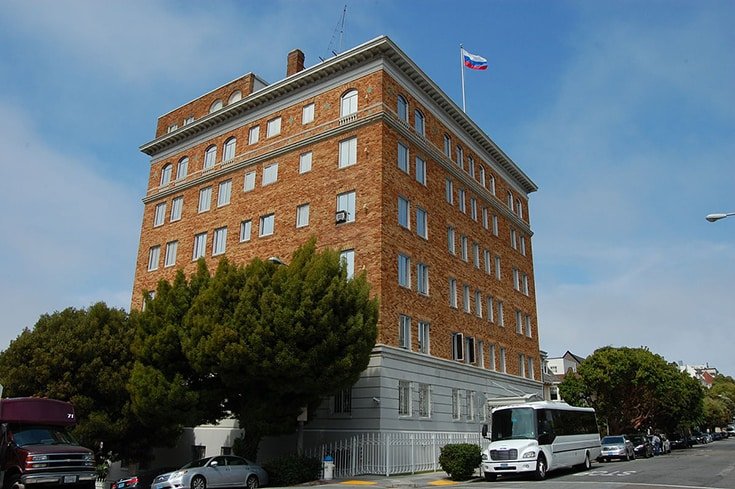 The Russian consulate in San Francisco

The United States has told Russia to close its consulate in San Francisco and buildings in Washington and New York that house trade missions, the State Department said on Thursday, in retaliation for Moscow cutting the US diplomatic presence in Russia.

The announcement was the latest in tit-for-tat measures between the two countries that have helped to drive relations to a new post-Cold War low, thwarting hopes on both sides that they might improve after US President Donald Trump took office in January.

Last month, Moscow ordered the United States to cut its diplomatic and technical staff in Russia by more than half, to 455 people to match the number of Russian diplomats in the United States, after Congress overwhelmingly approved new sanctions against Russia. The sanctions were imposed in response to Russian meddling in the 2016 presidential election and to punish Russia further for its 2014 annexation of Crimea from Ukraine.

“We believe this action was unwarranted and detrimental to the overall relationship between our countries,” State Department spokeswoman Heather Nauert said in a statement on Thursday, adding that the United States had completed the reduction.

“In the spirit of parity invoked by the Russians,” Nauert said, the United States has required the Russian government to close its San Francisco consulate and two annexes in Washington, D.C. and New York by Sept. 2.

The White House did not immediately respond to a request for comment on the decision.

Secretary of State Rex Tillerson informed Russian Foreign Minister Sergei Lavrov of the closures in a phone call on Thursday, a senior Trump administration official said. The two men plan to meet on the sidelines of the UN General Assembly in September, the official said.

Lavrov expressed regret about Washington’s decision during the phone call with Tillerson, his ministry said.

“Moscow will closely study the new measures announced by the Americans, after which our reaction will be conveyed,” the Russian foreign ministry said in a statement.

In December, the administration of Barack Obama closed two Russian countryside vacation retreats in Maryland and New York, saying the compounds had been used for intelligence-related purposes. The closures were part of a broader response, including the expulsion of 35 suspected Russian spies, to what U.S. officials have called cyber interference by Moscow in the 2016 elections. The Kremlin has denied the allegations.

Trump came into office wanting to improve relations with Russia, a desire that was hamstrung by the election interference allegations. The new sanctions passed by Congress conflicted with Trump’s goals, but he grudgingly signed them into law this month.

The United States said last week that it would have to sharply scale back visa services in Russia, a move that will hit Russian business travelers, tourists and students.

The Russian consulate in San Francisco handles work from seven states in the Western United States. There are three other Russian consulates separate from the embassy in Washington. They are in New York, Seattle and Houston.

The consulate in San Francisco is the oldest and most established of Russia’s consulates in the United States, the senior Trump administration official told reporters. An official residence at theconsulate will also be closed.

No Russian diplomats are being expelled, and the diplomats assigned to San Francisco can be re-assigned to other posts in the United States, the official said.

The Russians can continue to retain ownership of any of the closed facilities, or sell them, but will not be allowed to carry out diplomatic activities there, the official said.

“Even after these closures, Russia will still maintain more diplomatic and consular annexes in the United States than we have in Russia,” the official said. “We’ve chosen to allow the Russian government to maintain some of its annexes in an effort to arrest the downward spiral in our relationship.”

Ukraine war: Fighting heats up in east and north after tank pledges