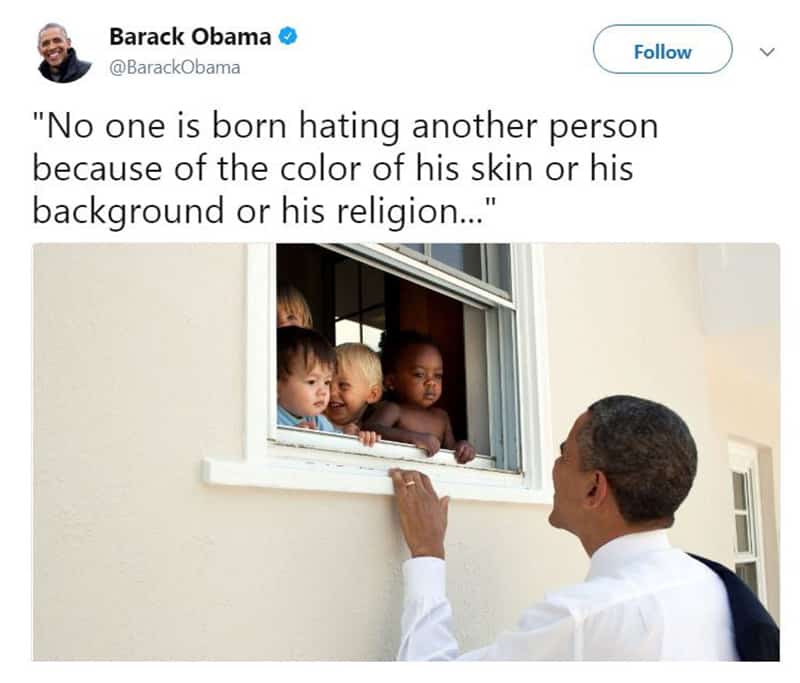 The most popular tweet of 2017, with nearly 4.6 million "Likes", posted by former U.S. President Barack Obama, accompanied by a photo by White House photographer Peter Souza and a quote by Nelson Mandela, is shown in this photo

US President Donald Trump continued to dominate Twitter in 2017 even though former President Barack Obama’s tweets were more liked and both were blown away by one man’s quest for free chicken nuggets.

Twitter revealed the year’s most liked and retweeted tweets on Tuesday, reflecting how a nation bitterly divided between Republicans and Democrats is likewise split on social media.

Trump, whose 44 million followers of @realDonaldTrump rank him 21st on Twitter, was the most tweeted about world leader and U.S. elected official.

Likewise @FoxNews, the conservative cable news channel, was the top tweeted news outlet, led by @SeanHannity, the host who is a friend and ally of the president.

The former president, whose @BarackObama ranked as the third-most-followed Twitter account behind @katyperry and @justinbieber, posted the most popular tweet: nearly 4.6 million likes for the Nelson Mandela quote, “No one is born hating another person because of the color of his skin or his background or his religion,” with a picture of Obama greeting a diverse group of babies through a window.That was also the second most retweeted item at 1.7 million times.

No president could compete with free nuggets, however. A 16-year-old named Carter Wilkerson, @carterjwm, garnered 3.6 million retweets in his campaign for a year’s supply of nuggets from Wendy’s.

He came up short of Wendy’s target of 18 million retweets, but Wendy’s still gave him the nuggets and a $100,000 donation in his name to the Wendy’s-linked Dave Thomas Foundation for Adoption.

The top four new U.S. political accounts were some of Trump’s most forceful critics, led by @PreetBharara, the former federal prosecutor he fired. Next came @SallyQYates, the former acting attorney general who was also fired by Trump.

Third was former Obama adviser Ben Rhodes, @brhodes, followed by Obama’s former official photographer, @PeteSouza, who has tweeted flattering pictures of Obama during some of Trump most criticized moments.

Right behind @FoxNews on the top tweeted news outlet list was @CNN, which Trump derides as fake news.

The most tweeted activist hashtag was #Resist, as in resist Trump, followed by #MAGA for Trump’s slogan Make America Great Again.

Among national leaders, Trump was followed by @narendramodi of India, @NicolasMaduro of Venezuela and @RT_Erdogan of Turkey.