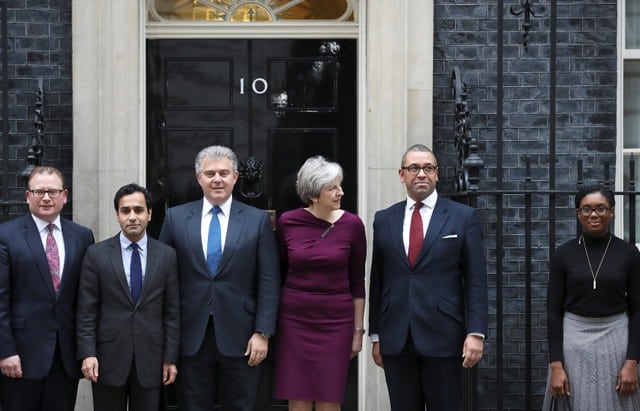 It was meant to be a fresh start to put a year of gaffes, scandals and an ill-judged election behind Britain‘s Theresa May, but so far it only seems to have made matters worse.

A much-anticipated reshuffle of her cabinet did little more than demonstrate the prime minister’s weakness, with the only high-profile moves derailed when one minister quit rather than take a new job and another talked May out of changing his role.

Add in a mistaken tweet over one early appointment and May, again, looks unable to stamp her authority on her government at the start of a year when she begins possibly the hardest part of Brexit negotiations in which she wants to secure a future trading relationship with the European Union.

The 61-year-old leader gets a second chance on Tuesday to try to meet the expectations of a Conservative Party keen to turn the tide of flagging support while the main opposition Labour Party is enjoying record membership.

With the top jobs set on Monday, she plans to use Tuesday to promote younger figures to more junior jobs, with more opportunities for women and members of ethnic minorities. But Monday’s start already brought scathing headlines.

“Night of the blunt stiletto,” the Daily Telegraph said as several British newspapers judged that May had failed to draw a line under her travails of 2017. Some Conservative lawmakers agreed, suggesting the moves were a reshuffle in name only, leaving little changed.

“Is that it?” Conservative lawmaker Nicholas Soames said on Twitter. “I don’t mean to be rude or to be seen to be disloyal but there needs to be a major improvement to the reshuffle tomorrow.”

May did find some support in the Conservative ranks, with some saying she was setting the ground for more fundamental change after Britain leaves the EU next year.

By promoting younger, black and women lawmakers to junior roles in government, she hopes to rid the party of its reputation of being “pale, stale and male”.

But by playing very much to her own party rather than the country, some critics said May risks losing the chance to revitalise what her aides call her “reform agenda”, already hampered by Brexit, a scandal over sexual harassment and struggling public services.

Monday’s reshuffle was blown off course when Health Secretary Jeremy Hunt convinced May at a lengthy meeting not to move him to a different job. Newspapers said he refused to accept a new post, although a source close to May denied that, and said Hunt simply persuaded her.

Then education minister Justine Greening refused to take a job at the pensions department and quit instead.

“Social mobility matters to me and our country more than my ministerial career. I’ll continue to do everything I can to create a country that has equality of opportunity for young people,” she tweeted.

Losing the only lesbian minister in the cabinet threatens what May hoped to be the narrative of her reshuffle: that she was ushering in a new, more diverse team to counter accusations that the Conservative Party is out of touch.

The resignation of the newly appointed board member of a new universities watchdog over sexist tweets did little to help distance May from scandals over sexual harassment last year that brought down two ministers.

More than 200,000 people had signed a petition calling on Toby Young, author of the satirical memoir “How to Lose Friends and Alienate People”, to be sacked from the Office for Students for a history of derogatory comments about women. He quit on Tuesday, two days after May said he should be allowed to stay.

Aides had long said Monday’s moves were less important that those planned for Tuesday, when May is expected to promote lawmakers to junior positions in preparation of a wider reshuffle after Brexit.

“Today I expect the rest of the picture to show that it’s more about preparing the ground for a post-Brexit reshuffle at a senior level,” Crispin Blunt, a Conservative lawmaker, told Reuters.