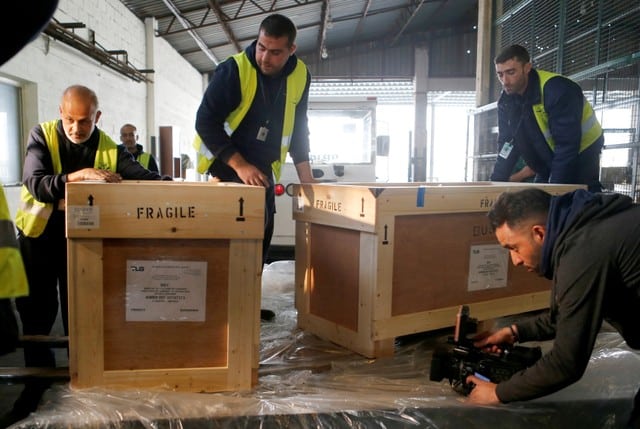 A marble bull’s head made 2,400 years ago for a Phoenician temple and looted during Lebanon’s civil war arrived in Beirut on Friday after American officials found it in the United States and sent it home.

The object – along with two partial statues that the United States is also returning – will be displayed in the National Museum in Beirut early next month, Lebanon’s Culture Ministry said in a statement.

They were stolen from a storehouse in Byblos in 1981 at the height of Lebanon’s 1975-90 civil war, as Christian and Muslim militias battled each other across much of the country.

In recent years, wars in Iraq and Lebanon’s neighbour Syria have laid waste their cultural heritage and created a huge market in looted antiquities, helping to fund the jihadist militants of Islamic State.

The Manhattan District Attorney’s office in New York said last month it was returning the three statues to Lebanon and was forming an antiquities trafficking unit to stop the trade in looted artefacts.

The three pieces, all excavated during the 1960s and 1970s from the temple of Eshmoun in the port of Sidon and dating from between the fourth and sixth centuries BC, had been sold to private collectors in the United States.

The bull’s head was identified by a curator while on loan to the Metropolitan Museum of Art as being among the antiquities stolen in Lebanon.

Located on the east coast of the Mediterranean, Lebanon was an important part of the classical world, home to the Phoenician civilisation and part of the Persian and Roman empires. It has several major ancient sites.

During the civil war, curators at its National Museum, which was located on a deadly front line, protected treasures that were not looted by sealing them up in the basement or encasing them in cement.

Others were located in other sites around Lebanon, including to Byblos, an ancient port town north of Beirut, where the three items returned on Friday were stolen.

The magical age of silent film, set to original music