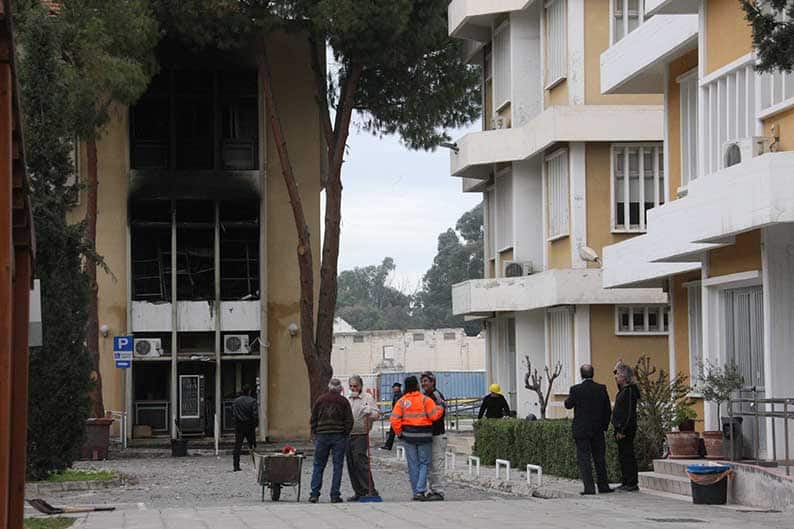 Officials at the scene of the destroyed court building in Nicosia

Authorities said on Monday they did not find any visible signs of foul play, as an early morning fire caused extensive damage to one of the buildings housing the district and criminal courts in Nicosia.

Fire service and police investigators said no signs of foul play were detected initially but have not ruled out anything as the probe continued.

“What we can say is that we haven’t found any visible signs of foul play,” fire service spokesman Andreas Kettis said. He added that investigators had collected samples from the scene, which had been forwarded to the lab for scientific testing.

The fire service was scrambled to the scene at around 2.50am after the alarm went off and police officers serving at the nearby Ledra Palace checkpoint notified the department of the blaze.

Two engines were dispatched from Paphos Gate station, which is also near, and one from Acropolis. The fire was brought under control at 4.40am.

The fire burned on the first floor of building four, which houses the district’s criminal court. There were concerns that it may have destroyed evidence held in a room on the same floor.

A blast was also heard around the time of the incident, but authorities are not yet certain whether it came before or after the fire.

It could be caused by several factors, including gas ignition and backdraft.

Police and fire investigators started their investigation at first light, sifting among the debris, which also littered the immediate area outside the building.

The investigation was completed late in the afternoon.

The scene was visited by Attorney-General Costas Clerides and senior police official Christakis Mavris in the morning.

All civil and criminal cases before the district courts were postponed for next week. Civil cases will resume on March 5 and criminal hearings three days later.

Among those is the case before the criminal court relating to the alleged bribery of the former head of the Central Bank to turn a blind eye to the takeover of Laiki Bank by the late Greek businessman Andreas Vgenopoulos, which had been scheduled for Monday.

The Supreme Court said it had asked to be briefed about the situation from the chief of police.

Pending that, the head of the administration has been instructed to put measures in place to tackle the practical problems created by the incident.

The chairman of the bar association Doros Ioannides stressed that the building was unsuitable with no security whatsoever.

Ioannides said the courts have been left unguarded for years, adding that it would be a blow to justice if the fire ended up being a deliberate act.

Justice Minister Ionas Nicolaou said there was a limit to security measures the authorities could put in place as long as the courts were housed in seven separate buildings.

“It is not possible to afford the same security, which could be provided if all the courts were housed in one building,” he said.

Earlier, the justice ministry said it had started procedures to construct a new building in the broader area in 2014.

By 2015 an adjacent complex used by the UN had been moved and the antiquities department carried out exploratory excavations to determine whether any relics were buried there.

After nothing was found a memo was submitted in January for the project to be included in the 2019 budget at a cost of over €46m.

“It must be noted that an international architectural competition will be held in 2019 and based on the design the tender procedure for the project, estimated at €46.7m will be launched,” the ministry said.

Women will save the world