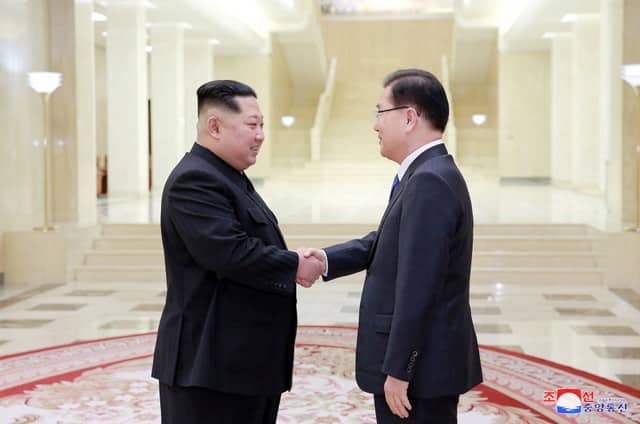 US President Donald Trump said on Tuesday he saw “possible progress” regarding North Korea after South Korea said Pyongyang is willing to hold talks with the United States on denuclearisation and will suspend nuclear tests while discussions are under way.

China also encouraged North and South Korea to continue their reconciliation efforts after a delegation from the South met with the North’s leader, Kim Jong Un.

“Possible progress being made in talks with North Korea,” Trump wrote in a Twitter post. “For the first time in many years, a serious effort is being made by all parties concerned. The World is watching and waiting! May be false hope, but the US is ready to go hard in either direction!”

“North Korea made clear its willingness to denuclearise the Korean peninsula and the fact there is no reason for it to have a nuclear programme if military threats against the North are resolved and its regime is secure,” the head of the South Korean delegation, Chung Eui-yong, told a media briefing.

The two sides will hold their first summit in more than a decade next month at the border village of Panmunjom, Chung added. The last inter-Korean summit was in 2007 when late former president Roh Moo-hyun was in office.

North and South Korea are experiencing a significant easing in tensions since the Winter Olympics in the South last month, even though they are technically still at war.

Chung cited North Korea as saying it would not carry out nuclear or missile tests while talks with the international community were under way. North Korea has not carried out any such tests since last November.

To ensure close communication, the two Koreas, whose 1950-53 conflict ended in a truce rather than a peace treaty, will set up a hotline between South Korean President Moon Jae-in and Kim Jong Un, Chung said.

The prospect of talks between the isolated North and the United States helped boost global stock markets, with the broadest gauge of global shares, MSCI’s All Country World Index , rising 0.7 per cent and Wall Street stocks opening higher .

Washington and Pyongyang have been at loggerheads for months over North Korea‘s nuclear and missile programmes, with Trump and Kim Jong Un trading insults and threatening war. North Korea has regularly vowed never to give up its nuclear programme, which it sees as an essential deterrent and “treasured sword” against what it calls US  plans for invasion.

The United States, which stations 28,500 troops in the South, a legacy of the Korean War, denies any such plans.

In Washington, US Director of National Intelligence Dan Coats said the United States would have to know far more before assessing North Korea‘s willingness to hold talks on denuclearisation.

“Hope springs eternal but we need to learn a lot more relative to these talks. And we will. And the IC (intelligence community) will continue to do every possible collection and assessment we can relative to the situation in North Korea,” Coats told a US Senate Armed Services hearing.

The director of the US Defence Intelligence Agency, Lieutenant General Robert Ashley, told the same hearing that he did not share a sense of optimism, adding, “That’s kind of a ‘show me,’ and so we’ll see how this plays out.”

Three US officials who follow events on the Korean Peninsula cautioned against getting too optimistic that the talks would lead to a breakthrough.

“There’s no indication that Kim (Jong Un) has abandoned his conviction that his country must develop a nuclear capability that can reach the continental US in order to deter an invasion and the overthrow of his family dynasty,” said one of the officials, speaking on the condition of anonymity to discuss classified intelligence assessments.

The officials cautioned that history suggested North Korea has agreed to talks to buy time for more research out of sight of US reconnaissance and to seek food and other aid from South Korea to offset the effects of tightening international sanctions.

“We don’t really have any choice but to welcome this development and take it seriously, but there also is every reason to hold our applause and watch for a real shift in the North’s military programs and posture,” one of the officials said.

Tensions between the two Koreas eased during the Olympics in South Korea, where Moon hosted a high-level North Korean delegation and the two sides presented a joint women’s ice hockey team. Kim Jong Un had invited Moon to North Korea for a summit, which was the first such request from a North Korean leader to a South Korean president.

North Korea has boasted of developing nuclear-tipped missiles capable of reaching the United States, in defiance of U.N. Security Council resolutions, but Pyongyang and Washington both say they want a diplomatic solution to the stand-off.

The first inter-Korean talks in more than two years were held early this year to bring North Koreato the Winter Olympics, when South Korea and the United States also postponed an annual joint large-scale military exercise that North Korea views as a preparation for invasion.

During this week’s visit, a senior Blue House official said North Korea was informed it was not feasible to postpone the joint military drills between South Korea and the United States again and that Kim Jong Un acknowledged the situation.

Kim Jong Un said he understood the drills, expected in April, would be of a similar scale seen in previous years, the official said. The North Korean leader also had a request for the world: that he be seriously acknowledged as a dialogue counterpart, said the official.

The South’s delegation leader, Chung, said he would travel to the United States to explain the outcome of the visit to North Korea and that he had a message from North Korea he would deliver to Trump.

Chung will later visit China and Russia, while Suh Hoon, the head of South Korea‘s spy agency and another member of the delegation, will head to Japan.

The United States has said before it is open to talks but its position has been that dialogue must be aimed at North Korea‘s denuclearisation, something Pyongyang has rejected.

Moon has also remained vigilant against North Korea‘s weapons ambitions, saying on Tuesday South Korea should bolster its defences in tandem with talks with Pyongyang.