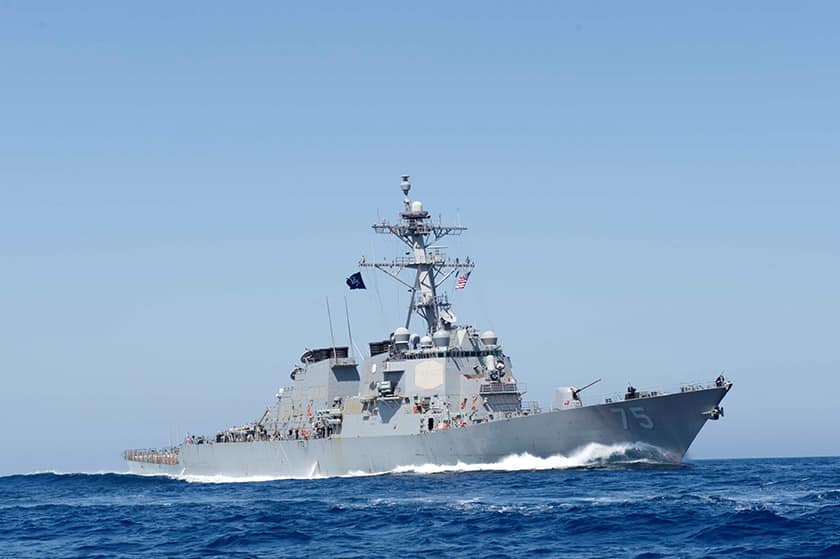 US President Donald Trump warned Russia on Wednesday of imminent military action in Syria over a suspected poison gas attack, declaring that missiles “will be coming” and lambasting Moscow for standing by Syrian President Bashar al-Assad.

Trump was reacting to a warning from Russia that any US missiles fired at Syria over the deadly assault on a rebel enclave near Damascus would be shot down and the launch sites targeted.

His comments raised the prospect of direct conflict over Syria for the first time between the two world powers backing opposing sides in the seven-year-old civil war, which has aggravated instability across the Middle East.

“Russia vows to shoot down any and all missiles fired at Syria. Get ready Russia, because they will be coming, nice and new and ‘smart!’,” Trump wrote on Twitter.

“You shouldn’t be partners with a Gas Killing Animal who kills his people and enjoys it!” Trump tweeted, referring to Moscow’s alliance with Assad.

In response, Russia’s Foreign Ministry said: “Smart missiles should fly towards terrorists, not towards the lawful government.”

Foreign Ministry spokeswoman Maria Zakharova said any US missile salvo could be an attempt to destroy evidence of the reported gas attack in the town of Douma. Damascus and Moscow have denied any responsibility and say the incident is bogus.

Dozens of people in Douma died and hundreds were injured in the attack, according to the World Health Organisation (WHO).

US Defence Secretary Jim Mattis, striking a cautious tone after Trump’s threat of missile strikes, said the United States was assessing intelligence about the suspected attack.

Asked if he had seen enough evidence to blame Assad, Mattis said: “We’re still working on this.”

The US military was ready to provide military options, if appropriate, he added. It was unclear if his remarks reflected unease about Trump’s apparent move toward military action.

Two US government sources told Reuters the United States still did not have 100 per cent solid evidence of what nerve agent was used in Syria and where it came from. However, there is some evidence it was sprayed from helicopters, they said.

In Moscow, the head of a Russian parliamentary defence committee, Vladimir Shamanov, said Russia was in direct contact with the US Joint Chiefs of Staff about the situation.

The Syrian Observatory for Human Rights, a British-based war monitor, said pro-government forces were emptying main airports and military air bases. The Syrian military has also been repositioning some air assets to avoid the fallout from possible missile strikes, US officials told Reuters.

The Russian military said it had observed movements of US Navy forces in the Gulf. Any US strike would probably involve the navy, given the risk to aircraft from Russian and Syrian air defences. A US guided-missile destroyer, the USS Donald Cook, is in the Mediterranean.

The Syrian foreign ministry accused the United States, which has supported some rebel groups in Syria’s conflict, of using “fabrications and lies” as an excuse to hit its territory.

“We are not surprised by such a thoughtless escalation by a regime like the United States regime, which sponsored terrorism in Syria and still does,” the state news agency Sana cited a ministry official as saying.

After the Douma attack, the insurgent group dug in there, Jaish al-Islam, finally agreed to withdraw. That sealed a huge victory for Assad, crushing a long rebellion in the eastern Ghouta region near the capital Damascus.

In London, British Prime Minister Theresa May said all the indications pointed to Syrian government responsibility for the attack and such “a shocking and barbaric act” could not go unchallenged.

“We’re rapidly reaching an understanding of what happened on the ground,” she told reporters. “We’ll be working with our closest allies to consider how we can ensure that those responsible are held to account.”

The BBC reported later that May was ready to give the go-ahead for Britain to take part in military action. She would not seek approval from parliament, the BBC said, despite calls from the opposition Labour Party for parliament to be given a say.

Oil prices jumped to their highest level in more than three years on Wednesday after Trump’s warning, and US stock index futures fell sharply due to alarm about a possible Russian-US conflict over Syria.

White House officials did not immediately provide more detail about Trump’s remarks. The US Defence Department said it did not comment on potential military actions.

Moscow and Washington blocked attempts by each other at the United Nations Security Council on Tuesday to set up international investigations into chemical weapons attacks in Syria.

Moscow’s threat to down US missiles came from its ambassador to Lebanon, Alexander Zasypkin, who said it was based on previous statements by President Vladimir Putin and the Russian armed forces chief of staff.

The Russian military said on March 13 that it would respond to any US strike on Syria by targeting any missiles and launchers involved. Russia is Assad’s most powerful ally and its devastating air power has helped him wrest back large areas of territory from rebels since 2015.

Zasypkin also said a clash between Russia and the United States over Syria “should be ruled out and therefore we are ready to hold negotiations”.

Both Russia and Iran, Assad’s other main ally, have warned his enemies against military action in recent days, underlining their commitment to the Syrian government they have armed and supported through years of conflict.

Ali Akbar Velayati, the top adviser to Iranian Supreme Leader Ayatollah Ali Khamenei, said during a visit to Damascus on Tuesday that an Israeli attack on an air base in Syria on Monday would “not remain without response”.

Israel held top-level security consultations on Wednesday on the possibility it could be targeted by Syria or Iran if the United States strikes Syrian government forces.

Syria’s Russian-supplied air defences shot down an Israeli F-16 jet in February during a previous bombing run against what Israel described as Iranian-backed positions in Syria.

Last year, the United States carried out strikes from two navy destroyers against a Syrian air base after another toxic gas attack on a rebel-controlled pocket.

Mel B will “set the record straight” with a new autobiography