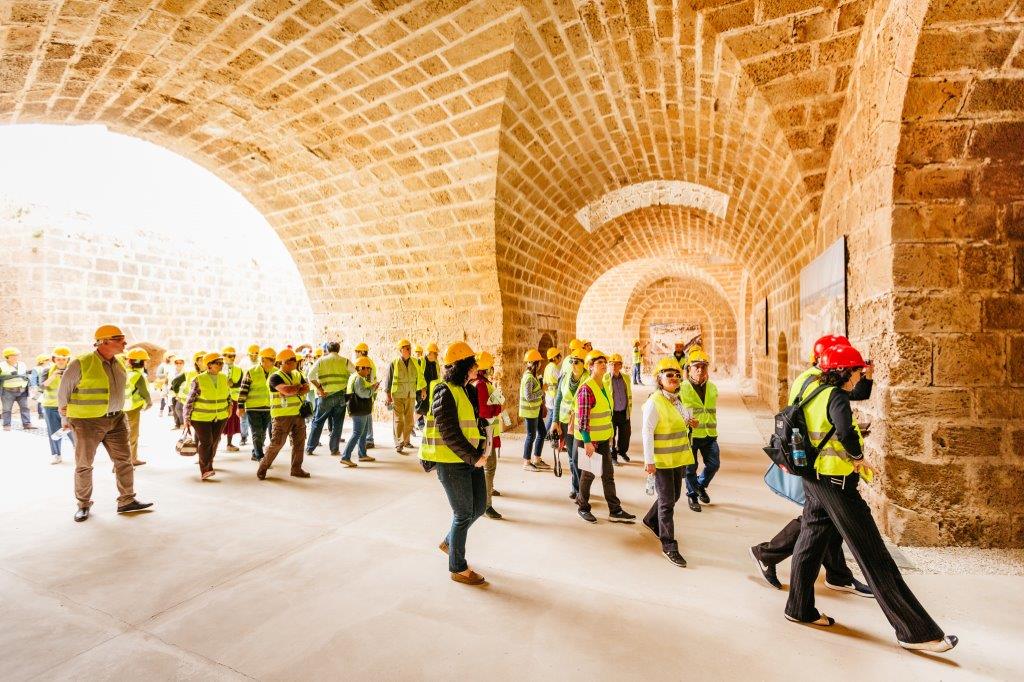 A short afternoon walk within the walls of Famagusta offers few clues that change is in the air yet careful scrutiny of the stone and brick surrounds reveals an ongoing internationally funded facelift with the aim of preserving and restoring the inherent beauty of this medieval centrepiece of Mediterranean commerce.

The town’s narrow streets, a labyrinthine warren linking majestic squares of soaring ancient buildings and tumbled ruins, are sleepy and unhurried, belying a past rich in the shuttle of business and trade transactions. Nowadays, elderly men sit on small chairs in front of their semi-defunct workshops. While some drink coffee and play backgammon in the shade of huge trees, others take idle strolls. 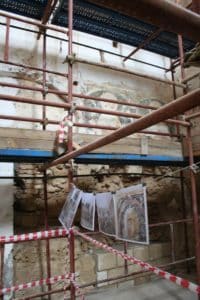 A closer look at some of these hallowed ruins yields a story of another age and more vibrant times. Whatever is left of the buildings’ former splendour has been gaining a new shine thanks to careful renovation work being carried out by experts working for the bicommunal Technical Committee on Cultural Heritage, which, together with the UNDP and the EU, has been engaged in a series of restoration projects within the town’s environs, some of which drew on initiatives of local NGOs within the two communities.

“All these projects are fully funded by the European Union”, UNDP head Tiziana Zennaro tells the Sunday Mail, speaking of the programme that began to take planning shape in 2012 and has been physically implemented since 2014.

“To date, the amount invested in Famagusta’s heritage totals more than four million euros”, she says, as she proudly enumerates the sites the Committee has been focusing on. It is a roll-call invoking history and culture, starting with the Othello Tower (or Citadel).

Originally built in the 14th century by the Lusignans to protect the port from possible enemy attack, the tower is perhaps Famagusta’s best-known monument in no small part due to Shakespeare’s play Othello which, of course, has a Famagusta setting. Added to this is the tower’s beautifully decorated main entrance, which features a magnificent relief of the Lion of St Mark of Venice, the engraved stamp of the Venetians who took control of the town at the of the 15th century.

Zennaro extols the Technical Committee’s dedication and commitment to the importance of renovation and preservation as she lists more of the sites where this work is being undertaken. Among them: the Martinengo Bastion, described in  “Historic Cyprus” by Rupert Gunnis as “one of the best examples of military architecture”; Ravelin/Land Gate (“perhaps the oldest part of the city after the citadel”), with its two Genoese Badges or coats of arms painted on the plaster; the Carmelite Church dedicated to St Mary of Carmel, where “the body of the Blessed Peter de Thomas, Latin Patriarch of Constantinople is said to have rested”; the 14th century St Mary’s Church of the Armenians; and finally, located nearby, St Anne Church and the Tanner’s Mosque (previously known as the Jacobite Church).

According to Zennaro, once the last two building have been renovated, the committee already has plans to move on to further historic sites. One is the legendary Canbulat Bastion, where an Ottoman commander of that name was killed by a gruesome Venetian machine chillingly described as “formed of a wheel covered with knives that cut into pieces any Turk who try to force his way through the narrow entry”. Also, on the to do list is the Sea Gate, one of two main gates leading into the walled city, which was built in 1496.

That is a hell of a lot of projects for just one place, I remark to Takis Hadjidemetriou, who leads the Technical Committee on behalf of the Greek Cypriot community and he is at pains to explain to me the reasons why the body focuses so much attention on Famagusta. He points out, is one of the most important towns in the East Mediterranean.

“Its character, monuments, history are all very unique. This town was inhabited by so many various people throughout the ages. Its vibrant multiculturalism should be transmitted to the whole island, shown in brightest colours to all Cypriots as an example of the coexistence we pursue,” he says.

Protecting and renovating the magnificent monuments of Famagusta is a wonderful example of what can happen when there is a cooperation between the two Cypriot communities, Hadjidemetriou adds.

“Cooperation brings culture the same way wars and confrontations bring catastrophe and destruction. For me, the work in Famagusta expresses exactly this. It is a message to people of what one can achieve through cooperation and mutual respect.”

His counterpart, Ali Tuncay, the Turkish Cypriot head of the Committee, offers the Sunday Mail some even more emotional reasons for putting so much effort into the renovation of Famagusta’s monuments.

“One has to remember that these monuments have suffered greater neglect perhaps than others simply because the intercommunal problems in Famagusta started very early on. Moreover, after the Greek Cypriots had left the walled city in 1958, they were never allowed back in — so some of these monuments have not been cared for in more than 50 years.” This, he explains, is why “they are in desperate need of repair.”

Tuncay, who was born in Famagusta’s old town in 1967, emphasises the point that Famagusta is treated no differently than any of the other projects carried by the Committee — the works there as elsewhere are conducted by both Turkish and Greek Cypriots as well as by some foreign experts.

“Our teams are not just bicommunal,” he laughs. “They are actually multicultural. Actually, I believe this perfectly reflects the philosophy we are trying to embody through our projects, i.e. if you love a monument, even if this monument doesn’t belong to your culture, it becomes your monument as well. This is what we are trying to enforce with our work: that a church or a mosque is not only a Greek Cypriot or Turkish Cypriot responsibility but that it is a common heritage. We seek to help people develop awareness of such monuments in their neighbourhood.” 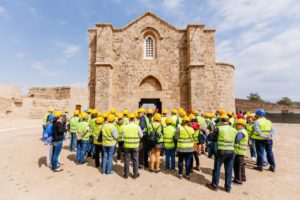 He believes this approach is succeeding too. “More and more Turkish and Greek Cypriots call us nowadays and ask to protect mosques and churches that remain empty in their villages. People are becoming more concerned, more aware. They realise that protecting monuments can also bring economic benefits. So we are a kind of mini model of how things should be in the future in Cyprus.  We show that if we work together we can produce results for both sides.”

This philosophy of inter-communal awareness is also preached by Serdar Atai, one of the founders of Famagusta Old Town Association (Masder), an NGO founded 11 years ago by Famagustians who felt not enough was being done to protect the town’s ancient monuments and realised a strong civil society is needed to change this status quo.

One of first projects undertaken by Masder was to successfully lobby for the renovation of the St Peter and Paul Church, the church originally built in 1359 with funds donated by the rich merchant Simon Nostrano. After the Ottomans conquered Famagusta, the church was converted into a mosque. Later, during the British period, the building was used as a grain and potato storehouse, hence the name it became known to local people by was Bugday Camii (Wheat Mosque).

“When the clashes in 1958 started and Greek Cypriots left the walled city, Turkish Cypriots remained trapped inside and realised they needed a common centre where weddings, concerts and theatrical plays could take place,” according to Atai.

“This function was given to Bugday Camii, which is why this church has a very special place in our hearts. That is why, when its roof started collapsing, we put pressure both on Turkish Evkaf and USAid to come to its rescue.”

Masder and Famagusta Initiative, its sister organisation, are responsible for many projects centred in the Famagusta region, all involving cooperation between the two communities.

Their achievements include facilitating the Greek Cypriot Famagusta Our Town Initiative, the first church service in the old town of Famagusta since 1958 (at the Church of St George the Exiler), and joint efforts with Dherynia Municipality to re-open lines of communication between inhabitants of Famagusta and Dherynia.

“The idea to start church service at Ayios Giorgos was great,” Atai recalls with a smile, because, in his words, the church “was like a bridge” between the two communities. “People have wonderful memories about this church because in the 1950s Greek Cypriots used to go there to pray and then meet their Turkish Cypriot friends, have coffee together, go shopping at the Turkish Cypriot market…  So when we did it, on December 13, 2013, 3,000 people came to this first mass, and afterwards, 5,000 to the Good Friday mass. And their old neighbours were there waiting for them so there was lots of crying and embracing.”

Both initiatives cooperate with the Committee and support its work in Famagusta.

“When they started renovating our monuments they could not find right stones to replace those badly damaged because as we all know, lots of stones from Famagusta were shipped off to Egypt to be used to build Port Said,” another well-known local activist Okan Dagli tells the Sunday Mail.

“We send a message to our supporters asking them for help and many people came forward with stones that they saved when their old buildings collapsed. Some sold them and some donated to the restoration projects and this is how many monuments were restored.”

Masder and Famagusta Initiative both firmly believe that if more is to be done to develop Famagusta a lot remains to be done in order to forge deeper links between Greek and Turkish Cypriots including the return of Varosha to its legal owners as well as opening the Dherynia crossing as soon as possible.

“Famagusta is like a bird with one wing broken and this broken wing is Varosha,” says Dagli.

“Yes, right now, we have this amazing old town and more and more people realise it and come to visit but as long as Varosha is closed the town will never realise its full potential. Varosha is Famagusta’s tourist seaside centre – it has to be given back and start functioning anew.”