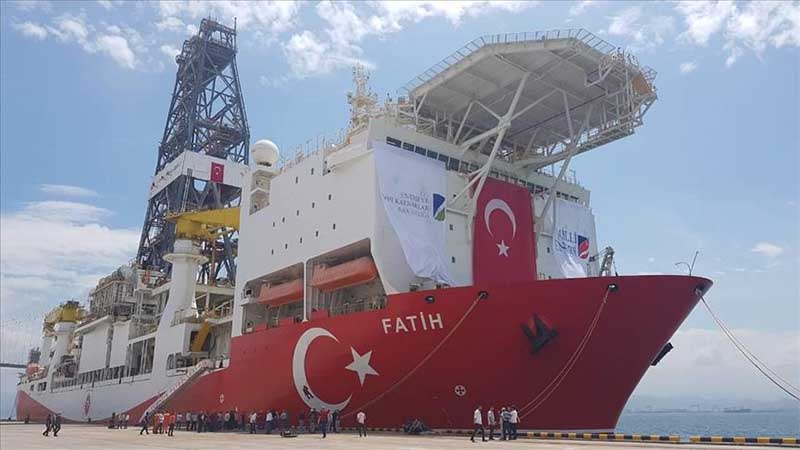 Turkey’s first drilling rig is currently at Antalya being loaded with drilling equipment waiting to start deep-water drilling operations in the East Med. Formerly known as DeepSea Metro-II, it has been named Fatih, meaning ‘conqueror’, after Istanbul’s conqueror Ottoman Sultan Fatih Sultan Mehmet. It is 229 metres long and can drill to a maximum depth of 12,000 metres.

Characteristically, during the launching ceremony Berat Albayrak, Turkey’s Energy Minister, said “the conquest of Istanbul opened a new era in world history and the deployment of the first drilling vessel marks the beginning of a new era in Turkey’s oil and gas drilling objectives… We are witnessing a milestone in Turkish energy history”.

While this is part of Turkey’s plans to drill for oil and gas in the Black Sea and the Mediterranean to reduce dependence on imports, it poses challenges for Cyprus. No actual drilling targets have been announced, but possible locations appear to be within what in effect is Cyprus EEZ, even if not formally declared, off the north and north-west coast.

In an interview in Hurriyet in July last year, Mithad Rende, formerly Deputy Director General of Energy and Environment at Turkey’s Ministry of Foreign Affairs, and Chairman of the Executive Committee of the OECD in 2014, said “Turkey should buy a drillship and send it to where Greek Cypriots discovered gas.” He added “We have two vessels for seismic search, but at one point you need to drill. Greek Cypriots only understand the importance of the issue by show of force, so in order to bring them to the negotiation table you need to do your own drilling… buy a drilling vessel and send it, and when you drill oil and gas, you become a player there.”

This appears to have been followed to the letter. In less than a year Rende’s advice is about to become reality. But in order to understand what lies ahead, let’s start with Turkey’s plans.

Turkey imports most of the oil and gas it consumes. Its own indigenous production covers only about 6 per cent of its oil needs and 1 per cent of its gas needs. And that’s expensive. The country paid $37.2 billion for its energy imports last year compared to $27.2 billion in 2016, and with the oil price approaching $80/barrel this year this cost may increase by another 25 per cent.

This is what has driven Turkey to develop a new National Energy Policy, announced in April 2017, centered on increasing efforts to explore unexplored regions in the Black Sea and the Mediterranean and to invest in developing its own drilling capability. Even though this is costly and risky, Turkey’s determination to reduce import dependency should not be underestimated.

This was confirmed by Turkey’s Albayrak when speaking at the ceremony to launch the Fatih rig on the northern coast of the Marmara sea. He said that Turkey is about to start oil and gas exploration both in the Black Sea and in the Mediterranean involving seismic survey vessels Barbaros and Oruc Reis and its new drilling rig Fatih. He also announced that negotiations are underway to purchase a second drilling ship to support these plans. Turkey is also planning to start drilling for oil in its eastern provinces bordering Iraq.

Albayrak stressed Turkey’s ambition to become a global player in oil and gas drilling, relying on Turkish engineers who will run and manage the operations. He said: “We are witnessing a milestone in Turkish energy history… the dream of deep-sea drilling activities has not been accomplished since the 1970s because of lack of trained staff and technologically adequate local machinery… Today, Turkey enjoys the results of energy transformation stimulated by mobilisation of domestic resources.”

The importance of the energy sector to Turkey is evident with the appointment of Albayrak, President Erdogan’s son-in-law and likely successor, to this ministry.

During the launching, Albayrak said that Fatih is scheduled to conduct deep-sea drilling operations off Antalya’s shores, with the first drilling well expected to reach 2,600 metres in depth. This is likely to be within Turkey’s jurisdiction, probably in time to impact the presidential and parliamentary elections on June 24.

However, this may be followed later in the year by drilling within Cyprus’ EEZ, probably coinciding with ExxonMobil’s drilling in block 10 in October. While Turkey has no claims on and may not intervene in block 10, as it did with block 3, it is likely to draw attention and assert its claims at a time that will have maximum impact.

During the launching ceremony, Albayrak said that “Turkey will continue to exercise its rights ensuing from international maritime law both in the Black Sea and Mediterranean Sea.”

His position is that the Turkish Cypriots and Turkey have been conducting seismic surveys in areas off Cyprus within the ‘EEZ’ declared by Turkish Cypriots, exercising its legal rights in accordance with international maritime law in partnership with Turkish Petroleum Company (TPAO).

Rende said as much in his interview. “Turkish Cypriots have declared their own blocks and awarded licenses to TPAO… TPAO has the right to start drilling.”

In an article in Daily Sabah in May it is claimed that ‘By unilaterally declaring an exclusive economic zone and granting licenses to international energy firms without due consideration of the rights of the Republic of Turkey and Turkish Cypriots, the Greek Cypriot administration is trying to usurp Turkey’s territorial rights. But the international maritime law allows Turkey and the Turkish Cypriots to exercise their rights in the region.’ Turkey says it will prevent Cyprus from searching for gas and oil off its coast if Turkish Cypriots are not included in the process.

These rights are based on a unique interpretation of international maritime law, pursued only by Turkey, based on national territories having continental shelves up to 200 miles while islands are limited to territorial waters. This, of course, runs counter to UNCLOS. On top of this Turkey does not recognise Cyprus as an independent country. Based on this interpretation it divided the East Med between itself and Egypt, treating Cyprus as an island with no rights to a continental shelf. This, for example, means that block 10 where ExxonMobil is planning to drill in October belongs to Egypt!

Unfortunately Turkey is prepared to use its military might to support exercising what it sees to be its ‘rights’ in the region.

Cyprus must continue pursuing its own plans despite Turkish provocation. The IOCs support this as reconfirmed this in May by Total that, despite the actions of the Turkish navy in stopping exploration in block 3, it is acquiring 50 per cent of block 8, and likely of blocks 2, 3 and 9, extending its partnership with Eni.

Cyprus cannot stop any incursions by Turkey within its EEZ but must report these to the United Nations and the international community and pursue its legal rights by any means possible. But above all it must not be deflected and must stick to its own plans.

All eyes are on ExxonMobil’s planned drilling in block 10 in October. Should a significant discovery be made, it promises to be a game-changer. As witnessed by statements made by Assistant US Secretary of State Wess Mitchell in early June, the US supports Cyprus’ rights to explore and develop hydrocarbons in its EEZ. He said “We’ve been clear in our messaging with Turkish officials that harassment of drilling vessels in the Cyprus EEZ is not something that we will allow to go unnoticed or not speak up about.” He also reiterated his country’s support for a bizonal federation as the form of the island’s reunification.

A country and its politicians in denial (Updated version)