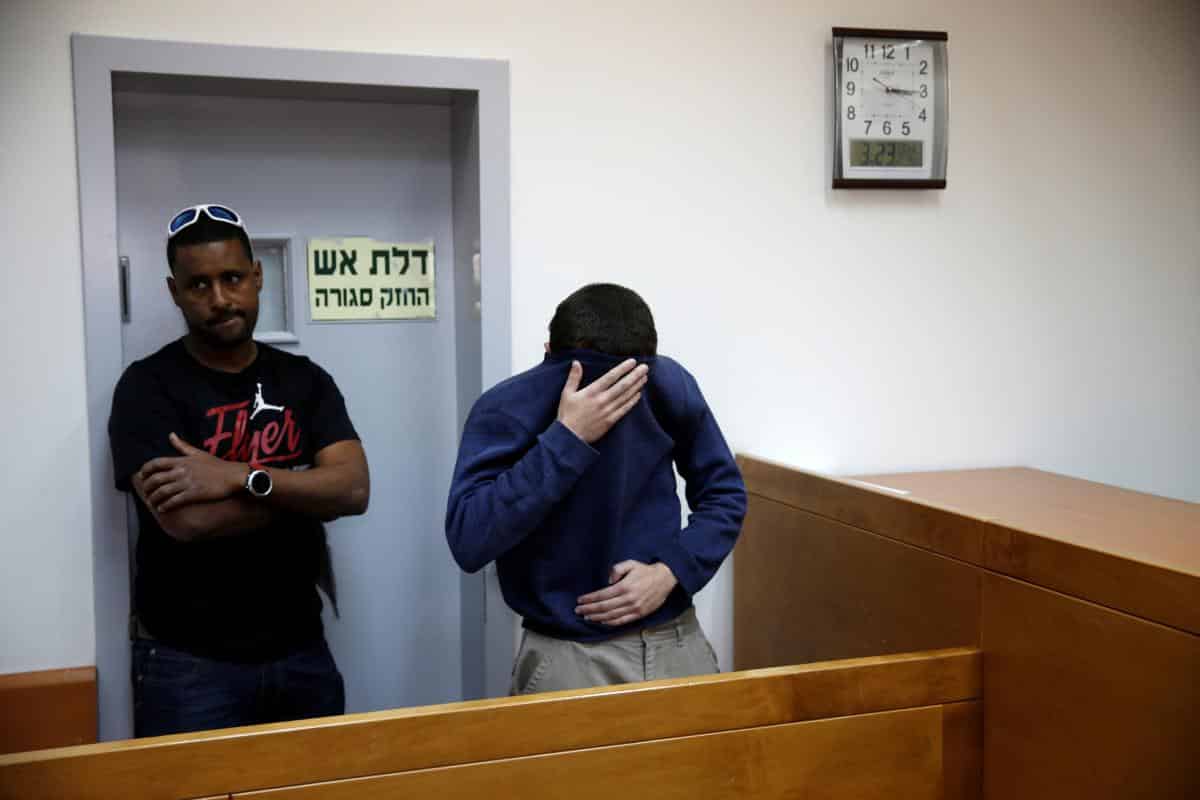 US-Israeli teen (R) arrested in Israel on suspicion of making bomb threats against Jewish community centres in the United States, Australia and New Zealand over the past three months, is seen before the start of a remand hearing at Magistrate's Court in Rishon Lezion, Israel

An Israeli-American teenager was found guilty in Israel on Thursday of making about 2,000 hoax bomb threats against Jewish and other institutions in the United States and elsewhere during Donald Trump’s rise to the US presidency in 2016 and 2017.

The incidents stoked allegations by some American critics at the time that the Republican contender was encouraging anti-Semitism and other forms of racism. Trump has denied any such wrongdoing.

The defendant has been separately indicted for hate crimes in several US states, where he was named as Michael Kadar, 19.

Israeli authorities have not published his name as he was a minor when some of the offences were committed.

Partly on the basis of a confession, Tel Aviv District Court convicted him of offences between his 18th birthday in August 2016 and his arrest in March 2017. It held off on formally convicting him of earlier charges pending a youth parole review.

Kadar was found guilty of counts including extortion, disseminating hoaxes in order to spread panic, money laundering and computer hacking over bomb and shooting threats against community centres, schools, shopping malls, police stations, airlines and airports in North America, Britain, Australia, New Zealand, Norway and Denmark. He was also convicted of assault for trying to grab a gun from a policewoman who searched his home.

The counts each carry potential jail terms of several years. The court did not immediately set a date for Kadar’s sentencing.

Kadar’s parents have said he has a brain tumour that causes autism and other mental problems, making him unable to understand the nature of his actions.

Psychiatrists found that Kadar was on the autism spectrum and suffered from paranoid delusions, but determined that he was fit to stand trial, according to the verdict released to media.

“I did it out of boredom. It was like a game. I understand that it is wrong, and I am sorry and will not do it again,” it quoted Kadar as telling the psychiatrists.

It said Kadar earned about $240,000 worth of the digital currency Bitcoin by selling his threat services online.

The US Justice Department has said that, in early 2017, Kadar phoned the Anti-Defamation League, a Jewish campaign group based in New York, with a bomb threat; made a bomb threat in an email to the Israeli embassy in Washington; and made threatening calls about bomb and gun attacks against Jewish community centres in Florida.

Tel Aviv District Court referred generally to “Jewish institutions” having been among the sites that Kadar, who is himself Jewish, targeted.

If he were to be convicted in the United States, Kadar could be given up to 20 years in prison for each hate crime and a maximum of 10 years for each bomb threat.

Asked whether the United States had requested Kadar’s extradition, neither Israel‘s Justice Ministry nor the U.S. Embassy in Jerusalem immediately responded.