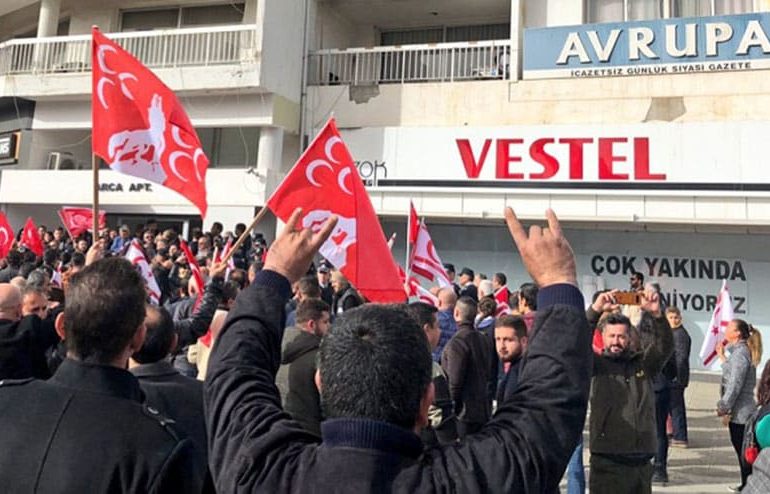 The attack on the Afrika newspaper offices in January

Turkish investigations and detentions targeting Turkish Cypriot academics and journalists have alarmed the Turkish Cypriot community and caused fear that Ankara has turned its authoritarian gaze to the northern part of the island.

Some academics and journalists have even posted on their social media accounts that they were cancelling planned trips to Turkey and looking for alternative routes when travelling elsewhere. Reports are also rife that police have recently begun to detain and interrogate people for possession of some books and songs.

Turkish Cypriots have been left shocked by the developments, and most recently by the move of the Ankara chief public prosecutor’s office to bring two lawsuits against Afrika newspaper and two of its journalists, editor Sener Levent and Ali Osman.

In addition, it has emerged that two Turkish Cypriot academics were detained by Turkish police in Istanbul and Izmir airports over the last couple of months for signing an online petition by “Academics for Peace” in January 2016.

Ankara has investigated all 1,128 Turkish signatories of the petition, which denounced military operations against Kurds in the southeast of Turkey. Four hundred of them have been expelled from Turkish universities, 148 are standing trial for ‘terror propaganda’ and four have received jail sentences.

This is the first time however, that Turkish Cypriot academics working in Cyprus have been targeted. Police reportedly interrogated the academics, whose names have not been made public, charges were pressed and they were released pending the outcome of the trial.

Afrika ran a front-page article in January, criticising Turkey’s military operation in Afrin, Syria, and calling it an ‘occupation’. The publication enraged Turkish President Recep Tayyip Erdogan, who had called on his “brothers in northern Cyprus to give the necessary response”. The newspaper’s offices were largely destroyed the next day by an ultranationalist mob.

On Wednesday under the headline ‘Red card to Ankara in Cyprus’, the newspaper reported that the case had caused a “firestorm of support” in Europe and in the southern part of the island. It has also been reported to the Organisation for Security and Cooperation in Europe (OSCE)and the EU. By contrast, Afrika said, despite the support the paper receives from the Turkish Cypriot community Ankara’s moves have been met by silence from the Turkish Cypriot leadership, including Mustafa Akinci.

The developments have alarmed Turkish Cypriot society, with a number of journalists and academics posting on their social media accounts that they are cancelling their trips to Turkey or taking alternative routes to travel abroad.

Amid an ongoing discussion about whether or not Turkish courts have jurisdiction over Turkish Cypriots, many have taken the social media demanding an explanation from Turkish Cypriot officials. Their silence has been deafening.

“Turkish Cypriot intellectuals, journalists are standing trial in Turkey. We are all up next… Do you think that those, who branded half of their own people as terrorists, will hold back when it comes to Turkish Cypriots?… Those in government are silent… If you are not protecting the basic rights of Turkish Cypriots in that place called parliament, then what are you doing?” wrote Dr Ayfer Yazkan Kubal in her column in www.gazete360.com.

Turkey has imprisoned hundreds of journalists, academics and civil society activists especially since the July 2016 failed coup for ‘attempting to destroy the constitutional order’, or ‘cooperating with and aiding armed groups’.

Hundreds of thousands of people have been detained, investigated or fired for suspected ties with the US based cleric Fethullah Gulen, whom Ankara accuses of being behind the coup. However, The AKP government is widely criticised as using the coup crackdown as an excuse to crush dissent throughout the country.

In a sign that whatever is happening in Turkey will also happen in the northern part of Cyprus, police have recently begun to detain and interrogate people for possession of some books and songs. There are no banned books or songs in Cyprus.

“Police have been harassing people for possession of ‘banned books’,” wrote journalist Sami Ozuslu in Turkish Cypriot daily Yeniduzen. “When were books banned in this country?… To add insult to injury, one person has been detained in Famagusta for listening to Kurdish songs. When were songs banned in Cyprus?”

In fact, the Turkish ambassador , Derya Kanbay, was very clear about Ankara’s intentions during a press conference earlier this month. Kanbay told journalists that they are having a difficult time going after Turkish Cypriots suspected of having ties with Gulen because terrorism is not defined in the laws there. This has so far limited the purge to Turkish citizens, who are handed over to Turkey upon detention. Kanbay also complained that Turkish Cypriot police can’t legally tap phones and said they had asked for certain legal amendments to make it easier for Ankara to pursue “opponents” in Cyprus.

It has become a custom for Turkish officials during their visits to declare to Turkish Cypriots with pride that “Whatever we have in Turkey, you will also have.” Turkish Cypriots are now faced with the chilling reality that the bold promise will be kept. In every sense.

Our View: Worrying signs of growing repression in north