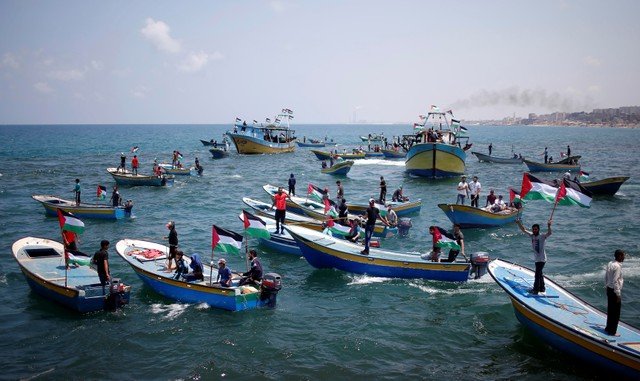 File photo A boat carrying patients and students sails towards Europe aiming to break Israel's blockade on Gaza, at the sea in Gaza

The foreign ministers of Cyprus and Greece, Nicos Christodoulides and Nicos Kotzias, will have a meeting with Israeli Prime Minister Benjamin Netanyahu on September 13 in Israel, it was announced on Friday.

The Cyprus News Agency said the meeting had been arranged a long time ago and it will focus on the ongoing trilateral cooperation between the three countries.

It was not expected to delve into the matter of building a pier in Cyprus to serve Gaza, which has resurfaced in Israeli media.

State broadcaster CyBC reported on Friday – quoting a government source – that on the issue of the pier, the government was ready to help as long as all sides – Israel, the Palestinians, Egypt, Jordan and the UN – were on board.

Quoting an unnamed Cypriot foreign ministry official, Israeli daily The Jerusalem Post reported on Friday that Nicosia has not yet had a “substantial bilateral dialogue” with Israel on the matter, and that there has not been any activity in recent days moving this proposal forward.

“We are aware of this proposal, and we are aware that the Israeli side is thinking of perhaps going forward and exploring the idea, but we have not yet had a substantial bilateral dialogue,” the official said.

According to The Jerusalem Post, Christodoulides’ meetings on September 13 were not expected to focus on Gaza.

The idea of using a section of a port or a pier in Cyprus to service Gaza was raised in late June when Defence Minister Avigdor Liberman visited Nicosia.

Government spokesman Prodromos Prodromou told the Sunday Mail in July that the Israeli request was being examined and that Cyprus had a positive view of the possibility of helping out with the situation in Gaza.

In an emailed response to the Mail, the Palestinian embassy confirmed at the time that the plan existed.

“The government of the Republic of Cyprus confirmed that a proposal to this end was indeed proposed by the Israeli government and confirmed that it will discuss this plan with the Palestinian Authority if the proposed plan goes under consideration,” the statement said.

Fabregas out of Arsenal reunion with leg injury