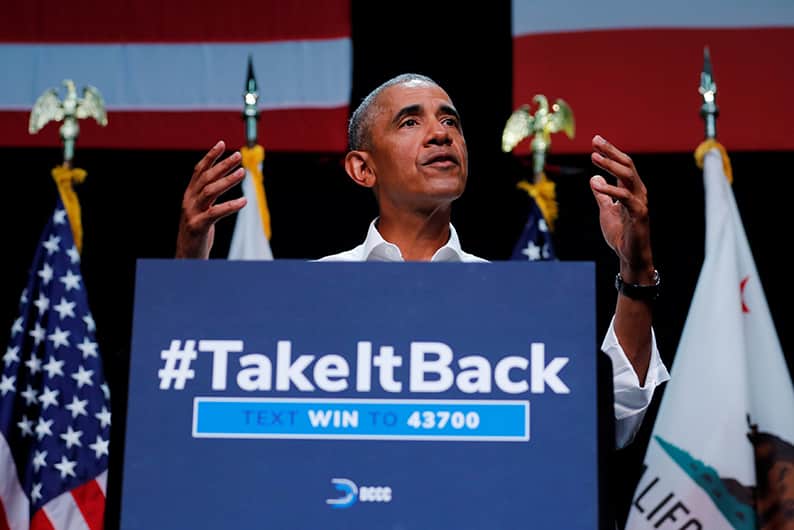 Former US President Barack Obama participates in a political rally for California Democratic candidates during a event in Anaheim, California

Nearly two years after leaving the White House, former President Barack Obama is set to return to the US political landscape.

To the delight of many Democrats, he has stepped back into the fray that former presidents often try to avoid, campaigning for candidates ahead of the midterm elections and blasting the political culture of the Trump era.

He attracted a large, adoring crowd this past week in Ohio and will be in Pennsylvania on Friday campaigning for Democratic Senator Bob Casey.

But Mr Obama’s return poses challenges for both the former president and his party.

He has struggled to turn admiration for him into votes when he is not on the ballot. Democrats lost significant ground in the 2010 and 2014 midterms and his enthusiastic campaigning for Hillary Clinton did not carry her across the finish line in 2016.

More importantly, Mr Obama’s public re-entry into politics could serve as a motivating factor for Republicans, potentially handing them a gift at a time when they face an uphill battle to maintain their grip on Congress.

“This is perfect for us,” said Rep Lou Barletta, the Republican challenging Mr Casey for the Senate seat.

“It will energise Republicans as a reminder.”

The former president will also “energise the blue-collar Democrats who worried about their jobs under the Obama administration and went out to vote for Donald Trump”, Mr Barletta added.

For their part, Democrats say an Obama visit is a huge boon. Massive crowds give candidates and the party a chance to organise, update contact lists, motivate new donors and boost volunteers.

Michael Halle, the campaign manager for Richard Cordray – the Democratic candidate for governor in Ohio, said Mr Obama’s visit sent a message about the stakes of the race, which could have implications for redistricting and voting rights in the future.

“First and foremost, it’s important for the people who live in Ohio,” he said. “But secondly, there are also significant national implications, and I think the [former] president weighed those in making the decision.”

An aide to the former president said Mr Obama is aware that he does not have a strong record of aiding Democrats in midterm elections and that his presence can have the effect of galvanising Republican voters.

The aide said Mr Obama would take a strategic approach to the midterm races and pointed to the light footprint that the former president kept earlier in his post-presidency.

Scott Mulhauser, who served as Vice President Joe Biden’s deputy chief of staff during the 2012 election, said Obama left office as the “most admired man in the country, and his popularity has only increased since”.

“Part of his success is being strategic in his approach to campaigning – coordinating with campaigns to maximise his impact and minimise any blowback, stumping where it makes sense and avoiding where it doesn’t,” Mr Mulhauser said.

“He’s rightfully out on the trail for certain campaigns, taking a pass on others and recording calls and sending emails on behalf of those that want to use him and his popularity in a targeted manner.”

In Pennsylvania, Mr Obama returns to a state he carried twice but that swung to President Trump in 2016.

The state features critical contests for Congress and governor. Rep Dwight Evans of Philadelphia, where Mr Obama will campaign, said that the former president’s presence will be important for his ability to motivate African-American voters, college-aged voters and the poor.

“I think that he can help Democrats, and I think it needs to be really targeted,” Mr Evans said.

Both African-Americans and college-age voters were crucial to Mr Obama’s victories in 2008 and 2012, and because Mr Obama was the first black president, Mr Evans said, “he can say some things to the African-American community that cannot be said by anybody else”.

While in Philadelphia, Mr Obama will fund-raise for Senate Democrats in general and in particular, Mr Casey, who was Mr among Obama’s earliest Senate backers when he sought the Democratic presidential nomination in 2008.

While Mr Obama’s full schedule is taking shape, aides say he is weighing how to best engage on behalf of Democratic candidates across the nation.

Earlier this year, he endorsed more than 80 Democrats across more than a dozen states, and aides say a second wave of endorsements is expected this autumn.

Brenda Boots, 42, who attended the Ohio rally, said Mr Obama is a welcome presence and hoped he would inject the governor’s race with new life.