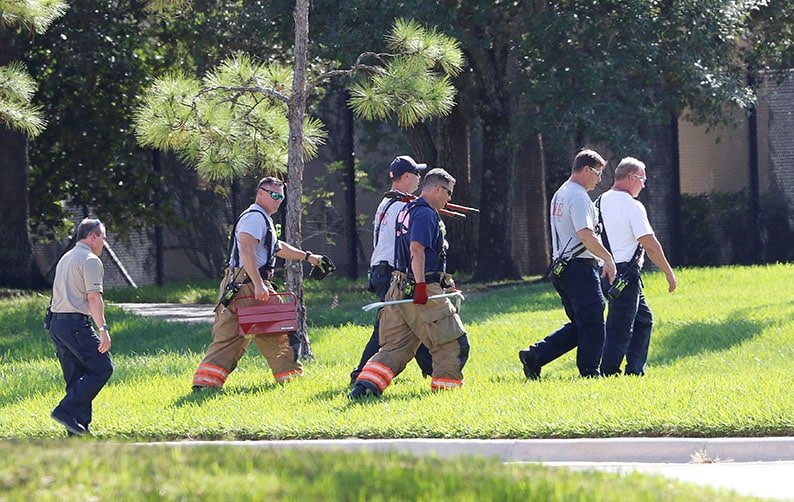 Responders walk towards a building containing the office of US Rep. Debbie Wasserman Schultz as the Broward County Sheriff's Office bomb squad performs a search in Sunrise, Florida

By Zachary Fagenson and Bernie Woodall

FBI agents arrested a 56-year-old man in Florida on Friday suspected of sending more than a dozen parcel bombs to high-profile critics of US President Donald Trump days ahead of congressional elections, authorities said.

Agents who took Cesar Sayoc into custody in Plantation, near Fort Lauderdale, also hauled away a white van that was plastered with pro-Trump stickers, the slogan “CNN SUCKS” and images of Democratic figures with red crosshairs over their faces.

A federal law enforcement source said the van belonged to Sayoc. Two witnesses told Reuters they heard a loud blast as he was detained in the parking lot of an auto parts store. Justice Department officials were due to hold a news conference at 2:30 p.m. EDT.

Announcing the arrest by the Federal Bureau of Investigation to a cheering audience at the White House, Trump said such “terrorising acts” were despicable and had no place in the United States.

“We must never allow political violence to take root in America – cannot let it happen,” Trump said. “And I’m committed to doing everything in my power as president to stop it and to stop it now.”

No one claimed responsibility for the parcel bombs addressed to former President Barack Obama and others, which authorities denounced as terrorism. The episode came less than two weeks before US congressional elections that could alter the balance of power in Washington.

Sayoc’s home address was listed in public records as an upscale gated apartment complex in the seaside town of Aventura, Florida.

According to the records, he is a registered Republican with a lengthy criminal past – including once making a bomb threat – and a history of posting inflammatory broadsides on social media against Trump’s political foes.

Sayoc was being held at an FBI processing centre in Miramar, Florida, CNN said. He was expected to be taken to the Federal Detention Centre in downtown Miami and will likely make his first appearance before a judge on Monday, according to former Assistant US Attorney David Weinstein.

A federal law enforcement source said charges would likely be brought by federal prosecutors in Manhattan and Sayoc transferred to New York City.

Four more suspicious packages were found on Friday, according to officials and media reports, bringing the total to 14. None of the devices has detonated, and no injuries have been reported.

Hours after a federal law enforcement official said the investigation’s focus on Florida had intensified, police closed roads around the parking lot of an AutoZone store in Plantation where Sayoc was arrested, and helicopters flew overhead.

A man named Dre, a manager at a used car dealership next door to the AutoZone, said he heard a loud noise that sounded like an explosion shortly after 11 a.m.

“I opened the door and saw the FBI there,” Dre, who declined to give his full name, said in a telephone interview.

A woman who lives nearby and declined to give her name said she was in her yard weeding on Friday morning when she heard a loud bang, saw smoke and heard a lot of shouting.

TV images showed investigators there using a blue tarp to cover Sayoc’s van before removing it on a truck.

Trump’s critics charged that his inflammatory rhetoric against Democrats and the press created a climate for politically motivated violence.

Trump’s supporters accused Democrats of unfairly suggesting the president was to blame for the bomb scare.

After first calling for unity at the White House event, Trump lamented attacks against him and again pointed at the media.

“I get attacked all the time … I can do the greatest thing for our country, and on the networks and on different things it will show bad,” he told the crowd, acknowledging an attendee who shouted “fake news”.

The devices were believed to have been fashioned from bomb-making designs widely available on the internet, according to a federal law enforcement source. Still, investigators said they were treating the devices as “live” explosives, not a hoax.

“I thank God no one’s been hurt, and I thank the brave and resourceful security and law enforcement people for protecting us,” De Niro said in a statement. “There’s something more powerful than bombs, and that’s your vote. People MUST vote!”

At 106, tireless French cyclist hops back in the saddle