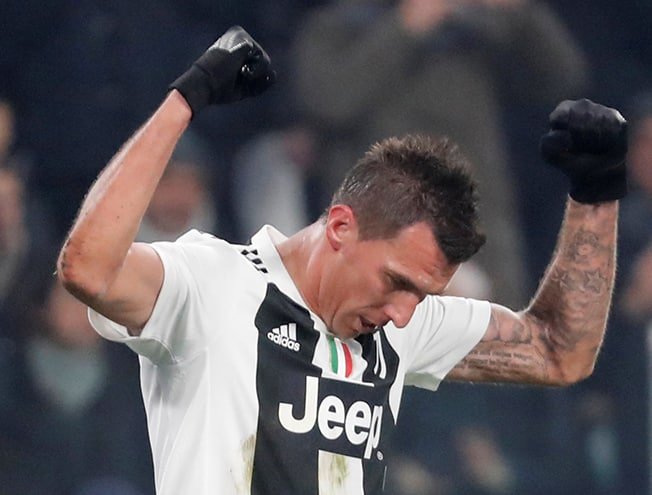 Massimiliano Allegri hailed Mario Mandzukic after the Croatian’s goal was enough to send Juventus 11 points clear in Serie A with a 1-0 Derby d’Italia victory over Inter Milan.

Mandzukic was once again the man for the big occasion as he headed home the only goal in the 66th minute.

“Mario is a great striker,” Allegri said on Sky Sports Italia. “It is not an accident he won the treble with Bayern Munich. He is a player who always makes his mark, even on bad days.”

With only two points dropped all season, Juventus are once again threatening to run away with the league, but Allegri sought to shut down such talk.

“We knew the championship wouldn’t end today,” he said. “But we still absolutely had to avoid defeat.”

The match proved a close battle, with Inter left to rue a Roberto Gagliardini shot which came back off the post in the first half.

“Inter caused us problems in the first half, opening up with Joao Mario and Gagliardini, so we struggled to close them down,” Allegri said.

“The biggest chances in the first half came from us giving the ball away.

“I moved Mandzukic to the left, Paulo Dybala played much better and we had a very different performance in terms of intensity and pressure.

“We allowed Inter practically nothing in the second half and we had several more chances.”

“The game had to be played a certain way with a consistent attitude, realising there are moments when you are going to be under pressure and need to get 10 players behind the ball” he said on Sky Sports Italia. ”

“We did that largely well, but there are some situations where we just don’t interpret or read them properly, while Juventus never got that wrong.

“If someone takes the lead of course it makes a difference, but we made too many basic and cheap errors.”

Spalletti did not name names, but appeared to criticise his players’ attitude at times.

“There was one incident where we burst away and got behind their defence, but couldn’t get the ball to the forwards. That sort of thing can make the difference, as we struggle to be consistent for 90 minutes.

“There’s always someone who is too slow, who talks too much, who is lax and not on the same page as the others. We had largely played well and the pressing to run back and defend when needed was a good sign.

“Unfortunately, Juve are smart and we are naive. They have a way of wasting five minutes after a foul.”