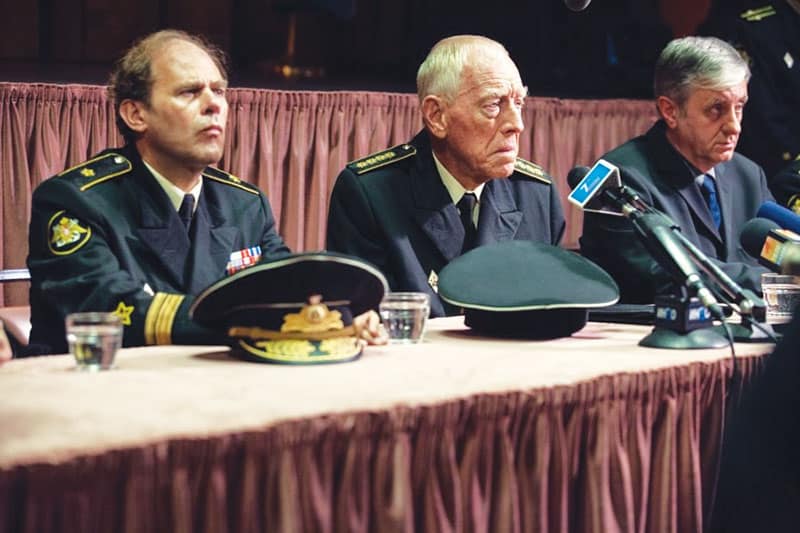 It’s a good week for true stories, meaning it’s a good week for spoilers; this review will assume you’re already familiar with what happened to the Russian submarine ‘Kursk’ in 2000, and what happened to Democratic politician Gary Hart in 1987. The latter may be a stretch for non-American audiences – but the former is surely a fair assumption, given how the story of the stricken sub gripped the world. The Luc Besson-produced Kursk, telling the tale of the disaster, is actually based on a book by Robert Moore with the charming title A Time to Die; no pussyfooting there, that’s for sure.

Unfortunately, that also means Kursk struggles to maintain tension and avoid looking ghoulish. It’s unpleasantly maudlin and manipulative when, for instance, the ‘Kursk’ sails out to sea for what we know will be her final voyage – and the local kids come out to watch her go while choral music plays on the soundtrack, director Thomas Vinterberg cutting to a close-up of little Misha whose dad Mikhail (Matthias Schoenaerts) is among the men on the sub. Disaster is followed by false hope, the Navy rejoicing at the presence of survivors – but of course we don’t rejoice, knowing better. The film becomes almost sadistic.

None of this is fatal, necessarily. Titanic, after all, is the second-biggest hit of all time, even though everybody knew the ‘unsinkable’ ship was going down (spoiler!). Kursk, however, isn’t so slick, giving out a whiff of the Euro-pudding. The multi-national cast ranges from Belgians to Swedes to Austrians (everything but actual Russians, in fact), including Colin Firth as a British commander – “Mother of God! They’ve lost a submarine!” – whose usual pained expression comes across, in this context, as the politesse of an English person trying not to seem condescending in a room full of foreigners speaking English. More than once, the script does that cheesy thing where a significant line is spoken and met with a puzzled “What?”, so it can be spoken again with more emphasis. “We don’t have any cartridges.” “What?” “We don’t have any cartridges!”

Kursk has its moments, certainly, from a long underwater sequence that’s very tense (if a bit over-extended; can anyone hold their breath that long?) to an ending that brought a lump to my throat – yet even the most intriguing aspect of the film is ultimately half-baked. The men of the ‘Kursk’ were (you might say) victims of Boris Yeltsin, and the looting of Russia that took place in the 90s. By 2000 the country was broke and broken, too poor to save its stricken sailors – but 2000 was also the year when Vladimir Putin came to power, turning it back into a functioning (if corrupt) state. If you needed Putin’s popularity explained, Kursk might provide a useful starting-point – but in fact he’s not even mentioned, the top Russians being paranoid old wrecks grumbling of “foreign interference”. Typical. 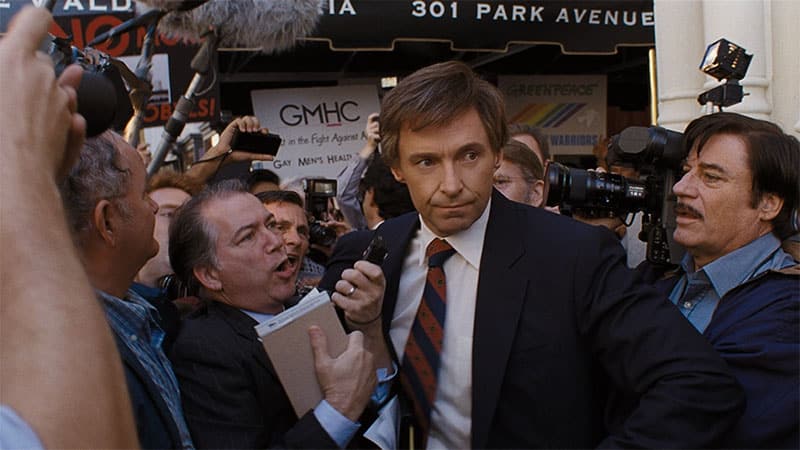 Donald Trump, in turn, is never mentioned in The Front Runner – how could he be? the film is set during the run-up to the 1988 presidential election – but Trump-era politics is the unspoken theme of this rather synthetic movie. Once the media stopped focusing on issues and started focusing on personal lives, goes the film’s argument, once they started treating politics as a TV reality show – “There is no privacy. The cameras go everywhere now” – America went down a slippery slope that ended with Trump, a TV reality-show star, as president. The pivotal moment, it claims, was the campaign of Gary Hart (Hugh Jackman), a superb (and married) politician who cared about issues and was “talented at untangling the bullshit of politics” so voters could understand it – but was ruined by a sex scandal, the media exposing his dalliance with another woman, despite his insistence that his private life was his own business.

This message is deeply unfashionable. The thinking now, in the wake of #MeToo, is precisely the opposite, viz. that public and powerful figures should be named and shamed for what they do in private. The bigger problem, however, is that the film is devious – and the even bigger one is that it’s unconvincing. Hart is too perfect, an outdoor type who also reads Tolstoy and knows economics better than any policy wonk. His precise role in the affair is kept vague (we see him briefly, looking uncomfortable on board the good ship ‘Monkey Business’) when it’s surely relevant to know just how badly he behaved. The film’s main asset is its depiction of campaign politics as a huddle of fast-talking cynics – yet even this is slightly fake, the zingers too obviously zingers. “How does he look that good?” “Genetics.” “Whose – Don Johnson’s?” It’s all a bit laboured.

“I intend to run a campaign of ideas,” says high-minded Hart – and The Front Runner, too, should be commended for trying to be a film of ideas. That said, its message is dubious (though the argument that smart people are now discouraged from going into politics is probably sound) and its plotting increasingly muddy, especially for those who don’t know the details, i.e. almost everyone. The story may be true, but even informed non-Americans will struggle to recall what happened – except of course that Gary Hart didn’t become US president in 1988, the recently-deceased George HW Bush did. Spoiler!