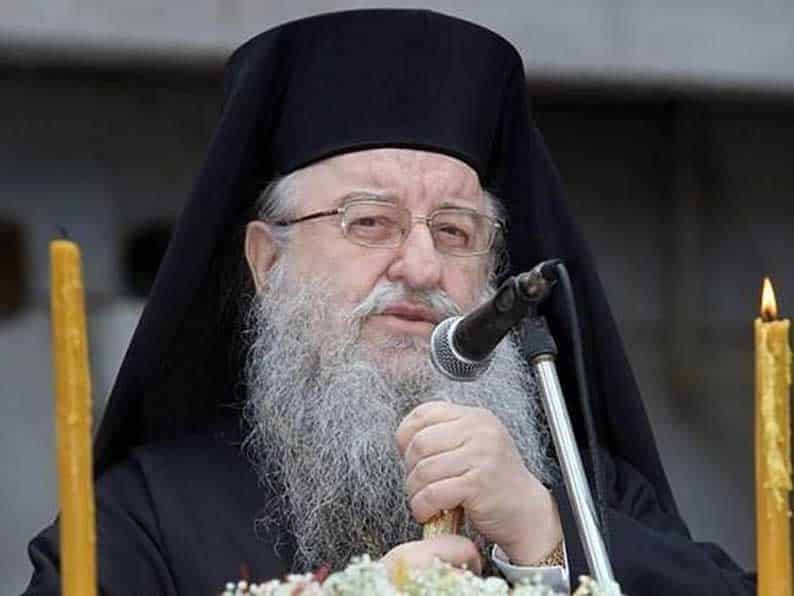 JUST ONE day after the robotic ‘seismologist’ InSight arrived on Mars on November 26, and started recording the wind on our neighbouring planet, the Bishop Anthimos of Thessaloniki mocked this news story by stating that the only planet in the universe was Earth! In order to sound more credible, the bishop said that he was told this theory by a “formidable scientist”, whose name – what a surprise – he could not remember. The scientist Anthimos consulted knows better.

In a normal state, the expected reaction to such an indirect admission of complete ignorance by a bishop would have been a welcome wave of amusement that would have temporarily raised our spirits and then forgotten about by the next day. This should have been especially so when the public knows that such a laughable view is expounded by a bishop whose deeds inspire anything but respect among his flock.

But Anthimos’ ignorance had a different effect on Cyprus, at least at one lyceum. My source is a teacher at the school whose identity I cannot reveal for obvious reasons – such is the kind of democracy we have in Cyprus. As he told me, the theologian of his school, when challenged by his students to reject Anthimos’ assertion, refused to do so, saying that “bishops were the representatives of God on Earth and whatever they said was wise and holy.” In other words, the specific theologian agreed (probably to avoid unemployment) with the bishop that Earth was the only planet in the universe.

This raises the issue of how religion is taught in schools. According to the Council of Europe the lesson relating to religious education must be intercultural, interfaith and knowledge-based. In other word, the council favours the replacement of religion classes, which are confessional (catechism), with religious studies where children are taught the history and philosophy of the different religions with objectivity, impartiality and respect for the principle of equal treatment.

Of these, I would like to highlight objectivity that does not exist in our schools where religion classes mean Greek Orthodox propaganda. As such, they cultivate a specific dogma and any students deviating from this dogma are penalised with a low mark in that subject which simultaneously lowers their overall grade. The education ministry that is completely controlled by the church has disdain for the ideas of John Locke, one of the leading thinkers of enlightenment. In his book Letter of Religious Tolerance in 1689, he argued “that every church is orthodox to its self, and mistaken and heretical for the others. What one church believes is considered the truth and anything contrary is condemned as wrong.”

Is it any wonder that we disdainfully refer to the non-Orthodox as ‘heretics’? Indicative of this mentality was the bishop of Limassol’s refusal to meet the pope when he visited Cyprus, because the pope was a ‘heretic’. The irony is that ‘devout’ Catholics who are far more numerous than the Orthodox would have also described the Limassol bishop as a ‘heretic’.

What should concern all of us is that the cultivation of dogmatism destroys critical thought and in the end stupefies students. We cannot, on the one hand, encourage students to think independently and resort to a range of sources before reaching conclusions and, on the other, punish them with low marks if they express a query or doubt about official dogma. At the above-mentioned school which discussed Anthimos’ view about the only planet, the students did not press the theologian for a proper discussion for fear that rejecting the view of “a representative of God on Earth” would have been considered ‘unchristian’ and punished with a low grade.

When intelligent students challenge a theologian they are always treated with the same response – ‘believe and do not question’ or ‘stop now’. As result, no student would be able to defend the theory Stephen Hawking analysed in his book ‘The Grand Design’ that God was not required to explain the creation of the universe.

At the very least, given that under current conditions the method of teaching religion in schools will not change, the grade given for religion should not be included in calculating a student’s overall grade. This would contribute to freeing thought.

The disheartening conclusion is that the rays of the Enlightenment have not passed through the black clouds covering Cyprus and the Erebus that covers us will not go away. The names Locke, Voltaire, Rousseau, Descartes, Leibniz, and those of other thinkers of the Enlightenment remind students more of football than freedom, democracy and equality.

As the Greek academic Eleni Ahrweiler argued, Greece and Cyprus did not experience the Enlightenment. And who was to blame for this? The renowned academic answered: “The Church. It almost excommunicated Voltaire and all the rest, the only Enlightenment thinker in Greece was Rigas Fereos. When they killed him as well, the Church did not mourn him.”

Man in critical condition after falling off avocado tree-reports (Update)