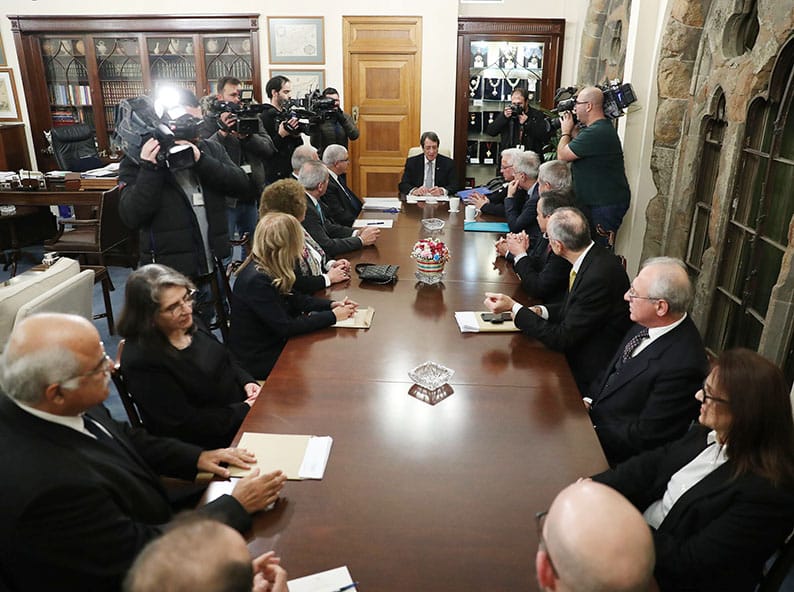 Judges meeting the president on Thursday

The supreme court will be issuing a new code of conduct governing the recusal of judges, it was announced on Thursday after a brainstorming session held at the presidential palace.

At the meeting, supreme court president Myron Nicolatos informed president Nicos Anastasiades that they are preparing a code of conduct relating to the circumstances under which a judge appointed to a case should recuse himself or herself should a conflict of interest or perceived conflict arise.

The code of conduct should be ready over the next few days, justice minister Ionas Nicolaou later told the media.

“We had a very constructive discussion tonight…we are on the right track,” he said.

What triggered the controversy was a case concerning an appeal filed by former BoC CEO Andreas Eliades against his imprisonment for market manipulation.

In a 2 to 1 decision, the three-bench supreme court found that Bank of Cyprus and Eliades, although they had made false representations about the financial status of the bank, did not do so with intent to manipulate the market but rather to ‘reassure’ shareholders.

The casting vote belonged to Nicolatos.

In the wake of the ruling, the attorney-general’s brother, Nicos Clerides, made a series of detailed claims that the courts have been captured by the Chrysafinis & Polyviou law firm, which represents Bank of Cyprus.

Clerides said all supreme court judges had a child at the law office that promoted the bank’s interests. He revealed also that Nicolatos’ sister and daughter had settled out of court two claims they had filed against the same bank in relation with convertible bonds they had acquired.

Though Nicolatos denied any wrongdoing, the optics were not good.

Strict rules regarding recusals had been in place until 2006. Those rules banned participation of a judge even in cases where lawyers who were partners or employers of relatives appeared before a court.

But they were subsequently withdrawn because of problems in the smooth operation of the courts and the universally accepted impartiality of the judiciary.

Also discussed at Thursday’s gathering – which went on for more than two hours – were ways in which to expedite the administering of justice.

A civil suit can take 10 years to finish and that’s without an appeal.

The government has prepared or is in the process of preparing nine bills designed to overhaul the system.

Included in the changes is the division of the supreme court into a supreme constitutional court and a court of third instance, and the creation of an appellate court staffed with the necessary number of judges to ensure speedy conclusion.

There will also be changes to the supreme council of the judicature to include district court judges, a lawyer and the attorney-general.

The supreme council of the judicature consists exclusively of the 12 supreme court judges and its president and is the only body that can discipline and or dismiss a judge.

The bills also introduce criteria for the recruitment of judges, the creation of a school for judges, a commercial court, an admiralty and a small claims court.

The justice minister said he hoped the bills would be forwarded to parliament as soon as possible.