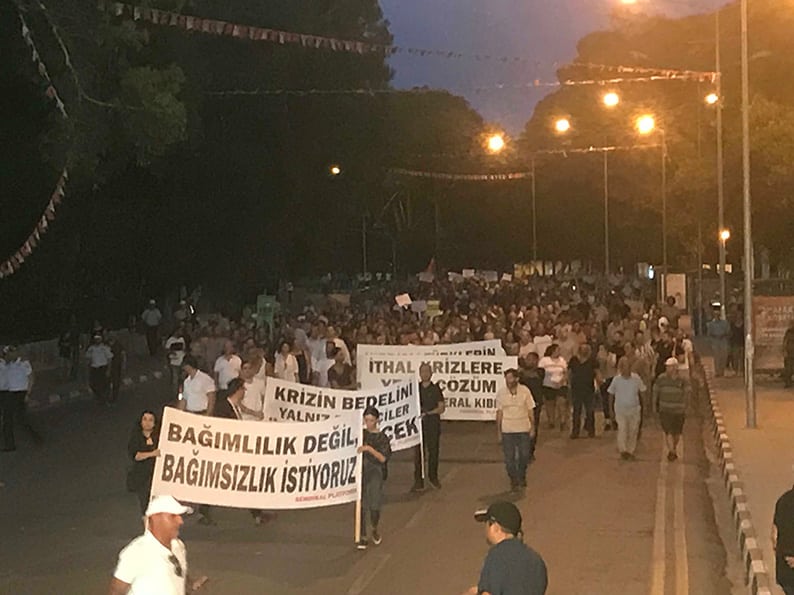 The Turkish Cypriot administration, financially dependent on Turkey, has not received any funding from Ankara for more than a year and is increasingly reliant on bank borrowing.

The unprecedented stoppage is being viewed as blackmail from Ankara to put political pressure on the ruling coalition.

The four-party coalition – Republican Turkish Party (CTP), People’s Party (HP), Democratic Party (DP) and Social Democracy Party (TDP) – which came to power in February 2018, has been relying on domestic borrowing to keep the system running. It currently has an internal debt of about 6 billion Turkish lira (about 980 million euros).

Although in recent years the Turkish Cypriot administration has largely been able to pay salaries through local revenues, it depends on financing from Turkey for infrastructure investments, defence expenses, incentives and private sector support.

Economists warn that without investments and private sector support the economy will be faced with stagnation in a matter of months. The lender banks are also expected to go under pressure since the administration does not have the capacity to pay even the interest, let alone repaying the loans, said economist Erdal Guryay.

“I don’t know how much longer this system can continue. It is not sustainable as it is. Imagine, you borrow but you can’t even pay the interest,” he said.

The devaluation of the Turkish lira, which lost almost 40 per cent of its value against the dollar in 2018, has added to the ruling coalition’s woes.

Unless funds start flowing, it will be very difficult for the ruling coalition to sustain stability until the middle of the year, says economist Vargin Varer.

“Not only because it will have difficulty in payments but because the drop in public spending will cause stagnation in the economy and cause a reaction in the people.”

The official explanation is that the delay is a technical glitch caused by the system change in Turkey as the country finalised the process of adopting an executive presidency replacing the parliamentary system of government last June. This has interrupted transfers to the northern part of Cyprus and delayed the preparation and signing of an economic protocol to regulate grants and loans from Turkey for the years 2019-2021.

Despite repeated statements by coalition partners, that the problem would be overcome soon, the delay continues, prompting sources to think that Ankara is using funding as leverage to impose political control on the ruling coalition.

“The problem cannot be technical,” said a source close to the administration. “Turkey is blocking the money due to political and social problems it has with the government.”

Back in December, former Turkish Cypriot leader Mehmet Ali Talat had stated that he did not believe what he called “a financial crisis with Turkey” is due to technical reasons. “Especially now that the system has changed and the powers of the president have increased, this would be something that could be solved with one instruction,” Talat said.

The ruling coalition officially denies that the problem is other than technical. Kudret Ozersay of HP, responsible for foreign affairs, told Yeniduzen newspaper in December: “What the Turkish officials are telling us is that they are having problems due to the change in the system and that the reasons are technical… This problem will be overcome. I believe that there are no bad intentions or political ulterior motives.”

“The problem is that they are not happy with this government,” said a member of the coalition, who asked to remain anonymous. “Ankara has two main expectations from us: Respect for its authority, and compliance with its Sunni Islam policies. And it is trying to make us conform through financial pressure.”

The infamous Afrika newspaper incidents were the first challenge for the Turkish Cypriot ruling coalition.

Ankara was open about the fact that it expected the Turkish Cypriot administration to punish Afrika after the newspaper first published a cartoon in December 2017 titled “Through Greek eyes” which showed an ancient Greek statue urinating on the head of President Recep Tayyip Erdogan.

Then, in January 2018, it ran a front-page article criticising Turkey’s military operation in Afrin, Syria, calling it a ‘second occupation after Cyprus’.

The publication enraged Erdogan, who called Afrika a “sleazy newspaper” and called on his “brothers in northern Cyprus to give the necessary response”. The newspaper’s offices were largely destroyed the next day by an ultranationalist mob while the riot police stood by.

“Ankara believes that the coalition did not back President Erdogan enough against Afrika,” said the source. “And the logic goes: why should Erdogan back a government that did not back Erdogan?”

The Turkish Cypriot coalition’s resistance against pressure for increased Islamic policies in the north is also a continuous cause of tension, according to the source. “For example, Ankara demands to directly control the Hala Sultan Mosque. We refuse and say if it is opened it has to operate under Turkish Cypriot control. This is why the mosque remains closed” although it was completed in mid-2018.

The monumental mosque, which is one of the biggest in the Eastern Mediterranean, has come to be widely seen as a symbol of Ankara’s religious and cultural pressure on Turkish Cypriots.

Last month, in what was widely seen as a big change in Turkey’s handling of relations with the Turkish Cypriots, it was declared that President Erdogan would personally be responsible for Cyprus, including being the sole authority for its financing. Turkey, in the past, managed its Turkish Cypriot affairs through a state minister.

“This means that now everything is now up to one person, whereas in the past relations were more horizontal,” said the source. “Erdogan’s approval will be sought for everything.”

The lack of any development to resume the flow of Turkish funds is also leading to speculation that soon the ruling coalition will be replaced by a right-wing National Unity Party (UBP)-People’s Party (HP) coalition, which would be more preferable for Ankara as traditionally, right-wing administrations are more compliant and conform to Ankara’s demands.

Seeking political and social change for more than 20 years