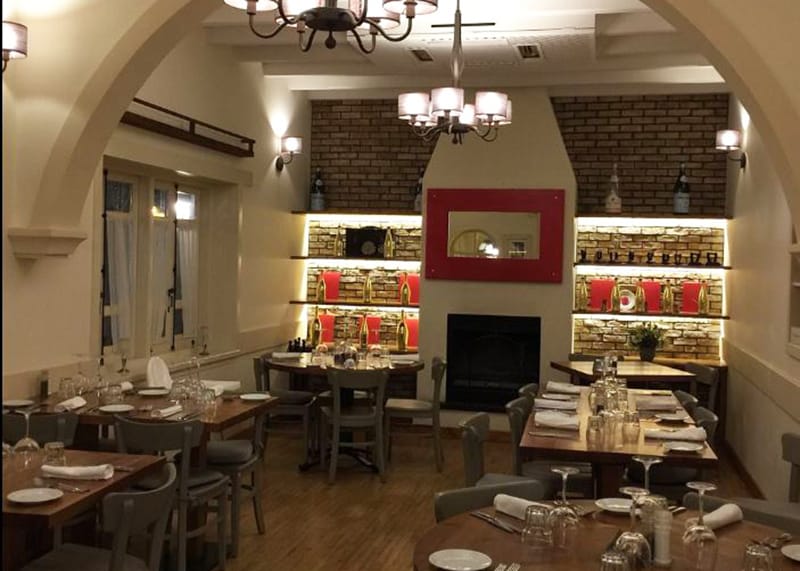 There are some restaurants dotted around Larnaca that you won’t stumble across while having a stroll in town, which is more the pity. One such restaurant is Red Pepper; tucked away behind a bank on one of Larnaca’s main roads it has been in operation since 2010.

With friends visiting, we decided to try something different from the norm and headed there. On entering we were greeted by a hostess and guided to our table next to the fireplace where there was a roaring fire, making the restaurant very homely and welcoming.

We were given our menus and I noticed the number 1,854 in the top corner. When I asked what it was, I was informed that the chef adapts the menu every day and since the opening in 2010 this was menu number 1,854. I was very impressed!

The menu wasn’t extensive but everything sounded delicious. Eventually, we all decided on having rib-eye steak as main but then discovered that the chef’s wife is Sicilian! Only a fool would pass up the opportunity to have pasta when under the close inspection of somebody from Sicily. Luckily, the pasta comes in two different sizes, so we ordered a small portion to share as a starter. The chef made an appearance to say hello and make sure we were ok which a pleasant surprise was as it isn’t something one usually experiences in Cyprus. We asked him about the ‘Chefs selection’ on the menu and I was sold when he said ‘baked camembert’.

While waiting for our food we were each brought a small serving of homemade tomato soup with some bread. The soup was very good indeed, it only excited us about what we were about to receive. Shortly after, the food starting coming. The ‘Chef’s selection’ starts consisted of crispy squid, crispy beef salad, beetroot salad, a halloumi dish and of course, the baked camembert! It was all sublime. You could literally hear the ‘mmmms’ around the table as each dish was sampled. The carbonara had also arrived. This ‘small’ portion was enough for four people to have an adequate amount each as a starter. The bacon used was fantastic, not processed slices that you could find at any supermarket, but meaty, smoky flavoured chunks giving the dish great flavour.

Not too long after the table had been cleared of our starters, the main dish arrived accompanied by a plate of chips for us to share. Juicy, tender, succulent rib-eye steak all round. The steak was cooked to perfection. I ordered mine medium to well and the balance of cooked to red meat was perfect, in my opinion, exactly how it should be. There was not one bite that I didn’t thoroughly enjoy.

After dinner as we sat letting our food digest Chef Simmons made another appearance to check on us to see how things were and have a friendly chat. I find this a lovely touch – it doesn’t take much to come out and say hello to the diners at a restaurant but it doesn’t happen enough so it was good to see the chef spending time to give each table some attention.

Just as we decided we couldn’t possibly manage another bite we were asked about dessert. I asked what was on the menu and we were told it is a surprise and they couldn’t tell us, just that it is their own unique dessert. Curiosity got the better of us and we all ordered one. I can honestly say that the high quality we had experienced thus far did not flail. A small, square dessert was brought out with a mini jug of fresh cream. It wasn’t just the flavour that was spot on, the size of the dessert was just right. Not too small but not so large that you’re struggling to finish it.

Considering the amount of food and drink we ordered and its exceptionally high quality, I feel that Red Pepper is definitely reasonably priced. I can, without a doubt tell you that I am definitely going back to Red Pepper. I hear the Sunday lunch is also fantastic!

WHEN Daily from 6pm