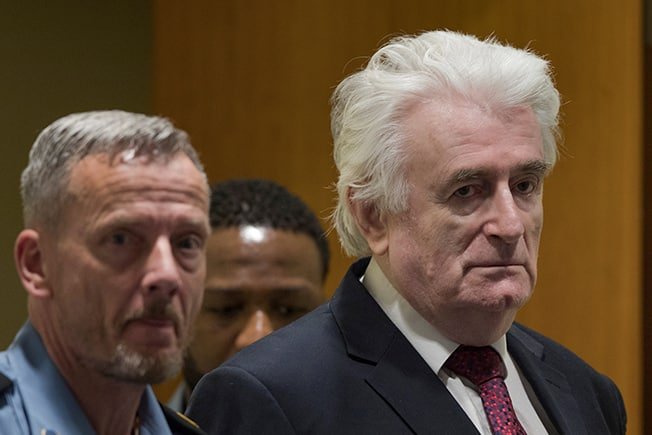 Radovan Karadzic appears before the Appeals Chamber of the International Residual Mechanism for Criminal Tribunal ruling on an appeal of his 40-year sentence for war crimes in The Hague, Netherlands

UN judges on Wednesday sentenced former Bosnian Serb political leader Radovan Karadzic to life in prison on appeal, ending one of the most momentous trials over genocide committed during the Balkan wars of the 1990s.

Appeals judges upheld Karadzic’s conviction for the 1995 massacre of 8,000 Muslim men and boys at Srebrenica and ruled that the 40-year sentence imposed at the close of his trial was too light, given the immensity of the crimes in question.

Survivors erupted into applause after Presiding Judge Vagn Joensen read the final sentence, which cannot be appealed. Karadzic, who had argued that the United Nations court was biased against him, stood impassively.

The sentence was fitting given the “extraordinary gravity of Karadzic’s responsibility and his integral participation in the gravest of crimes…committed throughout the entire area of the conflict in Bosnia”, Joensen said, reading the panel’s decision.

Karadzic, 73, was convicted in 2016 for the genocide at Srebrenica. He was also found guilty of war crimes and crimes against humanity for the 44-month Serb siege of the Bosnian capital Sarajevo that terrorised the civilian population, and for overseeing a campaign of ethnic cleansing that drove Croats and Muslims out of Serb-claimed areas of Bosnia.

“I am partially satisfied but a bitter taste remains that the Hague tribunal could not convict him on the second genocide charge, because of international pressure protecting the interests of Serbia,” said Mirsad Duratovic, a former Bosnian Muslim prisoner in three Serb-run detention camps in the northwestern town of Prijedor during the war.

‘HE IS STILL ALIVE WHILE MY FAMILY IS GONE’

“I cried because I lost my children, I am all alone. I am very shaken. I lost three sons, my husband, my grandchild, my father died,” said Mira Dogas of the Mothers of Srebrenica group, who travelled to the Netherlands for Wednesday’s verdict.

“He’s still alive while our children have been in the ground for a long time and they had a horrible death. He (Karadzic) is alive, he has food and drink. He killed and destroyed our children. I will go home to an empty house tonight and look at the walls. I have nobody.”

The ruling is final and cannot be challenged on appeal. Karadzic’s lawyer, however, said he would continue to consider ways to look for a judicial review or commutation of sentence.

“Karadzic says that if the choice to have an independent (Serb republic in Bosnia) meant that he had to lose his freedom he’s prepared to make that choice and lose his freedom,” Peter Robinson told reporters outside the courtroom.

“He has a lot of regret about what happened during the war and feels very badly for the all of the suffering today…He has a moral responsibility but he feels he does not have an individual criminal responsibility for any of those crimes for which he’s been convicted today.”

In hiding for over a decade after the war, Karadzic was arrested and handed over to the court in July 2008. He will remain in custody at the court’s detention centre in The Hague until judges determine where he will serve out his sentence.

An appeal verdict is pending in the case of Karadzic’s former right hand man, Bosnian Serb military commander Ratko Mladic, who was convicted of war crimes and genocide in November 2017 and given life in prison.

May urges parliament to back her on Brexit