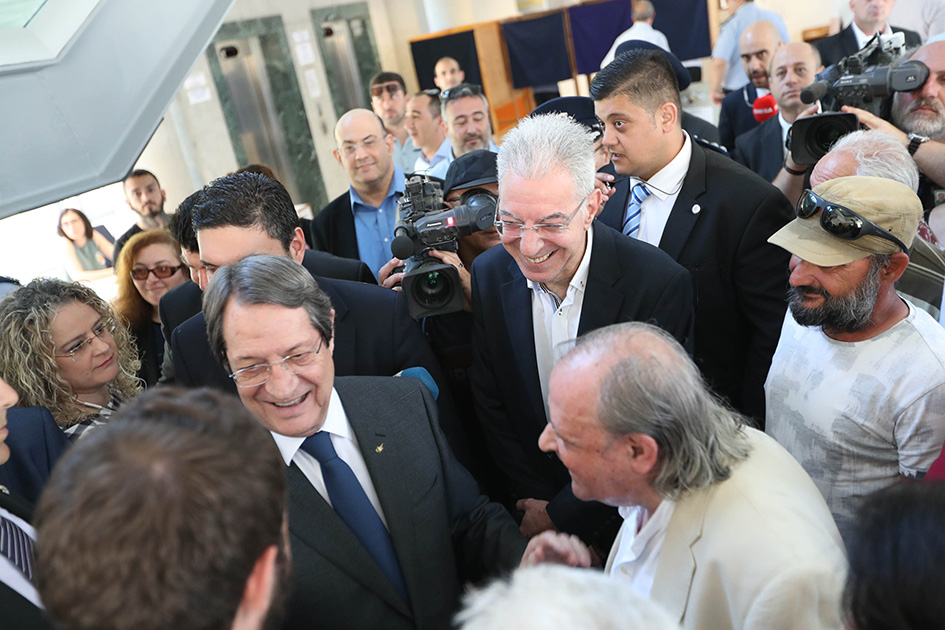 The level of Turkish Cypriot participation in Sunday’s European elections is an indication of how much better off Cyprus would be it was feasible to reunite and live as European citizens, President Nicos Anastasiades said.

Around 80,000 Turkish Cypriots living in the north are eligible to vote on Sunday and 50 polling stations were set up to facilitate them. Anastasiades, after casting his vote in Limassol visited one of the Nicosia stations to talk with Turkish Cypriots. It is not known yet how many crossed to vote but the station close to the Ledra Palace checkpoint had seen around 4,000 according to a rough estimate by the Cybc.

The election service said shortly after that 3.3 per cent of Turkish Cypriot voters had cast their ballot by noon.

Also at the station was one of the Turkish Cypriot candidates, Afrika publisher Sener Levent who was greeted by Anastasiades who wished him the best of luck. The president also spent some time greeting other Turkish Cypriot voters.

Speaking to the media after visiting the polling station, Anastasiades said: “Everything is going smoothly without any problems whatsoever. It is an indication of the current participation of Turkish Cypriots how much more our country would be happy if it were feasible to reunite and to actually live all of us as European citizens, legal citizens of Cyprus in a climate of mutual respect, a country that could offer everything it owes to all its citizens.”

Asked about Turkish Cypriot turnout, he added: “This creates the conditions for people in this country to understand that Europe is our home and can help us overcome the problems we are facing the talks and create those conditions to live in a reunited country under conditions that puts above all, human rights, the values of solidarity, the value of humanity and this is the most important part.”

The current state of affairs was not in anyone’s interest, the president added. He said he hoped that gradually and through similar processes people would realise the benefits of a solution create a state that will be free from the claims of any third country, meaning Turkey.

Asked whether it would be useful to have a Turkish Cypriot MEP, Anastasiades said: “It is always helpful if there are Europeans Cypriot citizens who have every right to participate in all processes both in Cyprus and throughout Europe.”

To a comment that it has caused rifts during the campaign, the president said there were always such moments during elections. “I do not think they dominate the debate,” he said.

“On the following day we should see how everyone is working together… we have challenges ahead, such as Gesy reforms and the challenges we face in Europe, depending on the results.”

One Turkish Cypriot voter, an elderly man speaking fluent Greek who was at the Nicosia polling station told Cybc the vote was a way for them to send “lots of messages”. The first, he said was for the Turkish Cypriots. “We are Cypriot citizens,” he said. The second message was to Greek Cypriots who don’t was a bizonal, bicommunal federation. “Cyprus is not just theirs. We are citizens of Cyprus,” he added, and for the EU, he said it was a chance for Turkish Cypriots to open their doors to Europe. “We all have to work together,” he added.