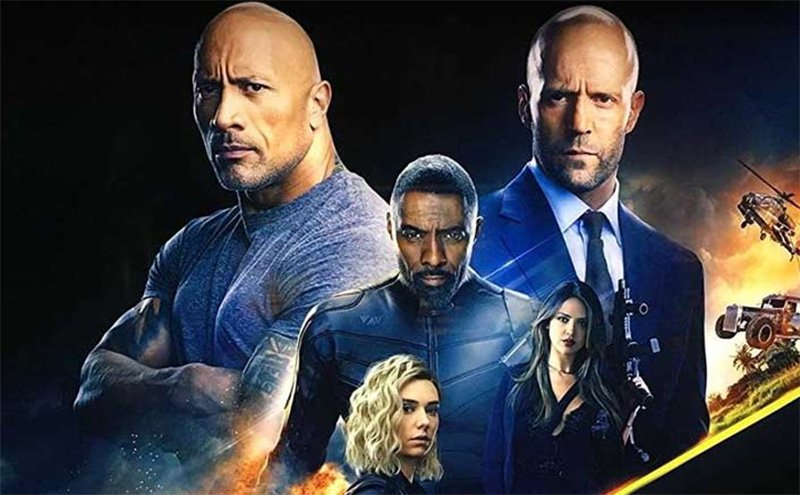 It’s scary how a diet of mindless cinematic noise chips away at your standards. ‘Hobbs & Shaw is grotesquely overlong at 135 minutes,’ huffs the discerning cinephile on my left shoulder. ‘Yeah, whatever,’ shrugs the multiplex hound on my right. ‘The film has no clever twists, and rests on a world-domination plot even James Bond might reject as old-fashioned,’ points out Lefty. ‘It’s okay, just don’t overthink it,’ urges Righty. ‘It’s an excuse for mindless cinematic noise, interspersed with Dwayne Johnson and Jason Statham sniping at each other.’ ‘And this is a problem because…?’

Is it a problem? I don’t know any more. We get so many of these things, the baseline has long since shifted from ‘Can it withstand rigorous analysis?’ to ‘Is it something you can watch without feeling like an idiot for having spent €9?’. On the one hand, it’s absurd that the film cost so much (an estimated $200 million) when its pleasures are so limited. On the other, those pleasures are real, even if you can literally count them on the fingers of one hand.

A stunt that involves abseiling down a skyscraper is a minor pleasure, especially the part where Johnson lets go of the rope and literally freefalls onto the baddie below. The action climax (in Samoa, where The Rock has real-life roots) is a pleasure, especially the part where a daisy-chain of cars gets dragged into the air by a chopper till only the first car is left on the road, stubbornly holding its ground – an insane tug-of-war that’s also among the few car stunts in a film that claims to be part of the Fast & Furious franchise. But of course the greatest pleasure – the main pleasure – is the banter between Johnson and Jason Statham as Hobbs and Shaw, supporting players in the F&F movies and duelling slapheads who express their bromantic animosity in constant alpha-male bickering.

You’re a “giant tattooed baby,” Shaw tells Hobbs. I despise your “nasal prepubescent Harry Potter voice,” Hobbs tells Shaw. Shaw refers to Hobbs as “she-Hulk”, Hobbs calls Shaw “Frodo” (he’s short, or at least shorter). Don’t tell me what to do, “you think I’m stupid?” snaps Hobbs; “Of course I think you’re stupid,” snaps back Shaw. The actors are game, even if the rhythms get repetitive; the back-and-forth never jumps the shark into tedious – but it does become strained, forced to do too much of the heavy lifting. One looks in vain for other pleasures, but what? Vanessa Kirby is merely adequate as Shaw’s ass-kicking sister. Idris Elba looks magisterially bored as cyborg villain Brixton – I suspect he’d make an even glummer 007 than Daniel Craig – though he does get to say “Genocide, schmenocide”.

Brixton is employed by a shadowy cabal who plan to unleash a deadly virus on the world. The virus is called ‘Snowflake’, presumably in reference to whiny millennials, and will only decimate the weak (it’s unclear why a deadly virus wouldn’t just kill everybody); like Thanos in Avengers, these supervillains appear to be driven by a misguided desire to save the world. Brixton touts “the evolution of Man” – but Hobbs & Shaw are proudly un-evolved, the film depicting them as warriors with more quote-unquote ‘heart’ than brains. “War is what I do!” declares Shaw; “Let’s go old-school!” adds Hobbs. Even their barrage of playground insults implicitly makes them human (as opposed to machines); as with the Avengers, grown men acting like 11-year-olds is the film’s biggest asset.

That ‘heart’ at the heart of the movie is something, of course. It recalls Vin Diesel’s soulful presence in the other Fast & Furious films – and this one, like those, is big on family values (Shaw reconciles with his sister, Hobbs with his brother). Maybe that could also count as a pleasure, this convivial warmth behind the noise – then again, how much slack can we keep cutting here? The film cost $200 million. Surely it should offer more than two decent action scenes and a vague sense of camaraderie?

Maybe, maybe not; who even knows anymore? Too much of Hobbs & Shaw is weightless and forgettable – yet it also depends how you look at it. Is the fight choreography impressive (the director, David Leitch, was behind the first John Wick) or merely professional, as you’d expect in a big-budget movie? Are the cameos by Ryan Reynolds and Kevin Hart just manic babbling, or actually funny? Some action films give you goosebumps (Mission: Impossible, most recently); Hobbs & Shaw did not give me goosebumps. If it’s mindless cinematic noise you want, however – interspersed with two amiable lugs trading tough-guy dialogue – I guess it’ll do. You know what I blame this on the chipping-away of? Standards.