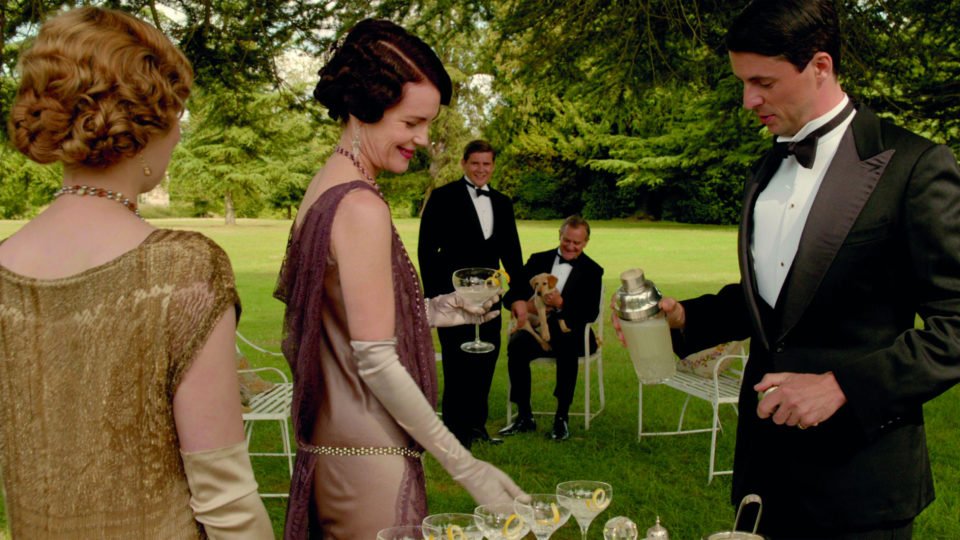 As fans of Downton will know, the Crawleys’ love of cocktails is well storied. But it wasn’t until season two and three – when Robert asks his mother, Violet: “Can I tempt you to one of these new cocktails?” – that the family adopts the 1920s American customs of an aperitif before dinner, and hosting cocktail parties at home.

Now, the Downton Abbey Cocktail Book means viewers can recreate these tipples at their own soirees.

From The Great Hall party drinks, to stirred libations in The Library, here’s how to “look very sunny tonight”, raise spirits and mirror the glamour of post-Edwardian high society…

Developed by barman George Boldt, who owned Philadelphia’s Bellevue-Stratford Hotel on South Broad Street, this frothy and delicate drink is named for a local men’s club that met regularly at the hotel from the late-1800s to the early-1900s.

Method: Combine all the ingredients in a shaker and shake hard for 10-15 seconds so the egg white froths up and emulsifies. Half fill the shaker with ice, re-cover, and shake hard for about 10 seconds longer. Strain into a chilled coupe glass.

Libation note: Although this drink doesn’t traditionally come with more than its frothy head as a garnish, try it with a mint sprig, slapped between your hands in a clapping motion to release the aroma before dropping it into the glass.

Created around the time of World War I, this elegant drink was said to pack the wallop of a 75mm French artillery shell, thus its name.

Method: Half fill a shaker with ice. Combine the gin, lemon juice, simple syrup, bitters, and 1 zest strip. Shake hard for 8-10 seconds, and strain into a chilled champagne flute or coupe. Top with sparkling wine. Express the remaining zest strip over the drink and drop it into the glass.

Libation note: Shaking the lemon zest with the other ingredients can make the drink a little bitter, so if you want a bit less intensity, leave it out.

This cocktail is unique, not just for its use of Fernet, the inky dark and bitter Italian digestif, but also because it was created by Ada ‘Coley’ Coleman, the second-ever female bartender at The Savoy hotel’s American Bar in London.

Method: Combine the gin, vermouth, and Fernet in a mixing glass filled with ice and stir until well chilled, 20-30 seconds. Strain into a chilled coupe or cocktail glass. Express the orange zest over the drink and drop it into the glass.

Libation note: The name of the drink most likely came from a simple nonsense rhyme. Such rhymes were a common part of popular culture of the 1920s.

This is one of those drinks whose origin and name are locked in disagreement, with many claiming it came from the Ritz, Paris, and others that it came about when someone drove a motorcycle into a Paris bistro soon after World War I.

Method: Run the lemon wedge along the rim of a chilled coupe or cocktail glass. Pour a small mound of sugar onto a flat saucer. Tip the glass so it’s almost parallel to the plate and gently roll its dampened edge in the sugar to create a sugar-frosted rim.

Half fill a shaker with ice, add the brandy, orange liqueur and lemon juice. Shake hard for 8-10 seconds, and strain into the prepared glass.

Libation note: The sweetness level of every brand of orange liqueur differs, as there is no established standard. Taste the cocktail before pouring it into the prepared glass and adjust as needed with more liqueur (or simple syrup).

This cocktail is basically a dry martini dressed up with the addition of maraschino liqueur and absinthe.

Method: Combine the gin, vermouth, maraschino liqueur, absinthe, and bitters in a mixing glass filled with ice and stir until well chilled, 20-30 seconds. Strain into a chilled cocktail glass or coupe. Garnish with the cherry, putting it directly into the glass, and then express the lemon zest over the drink and drop it into the glass.

Libation note: The small amount of absinthe makes a surprising difference to the flavour of the cocktail.