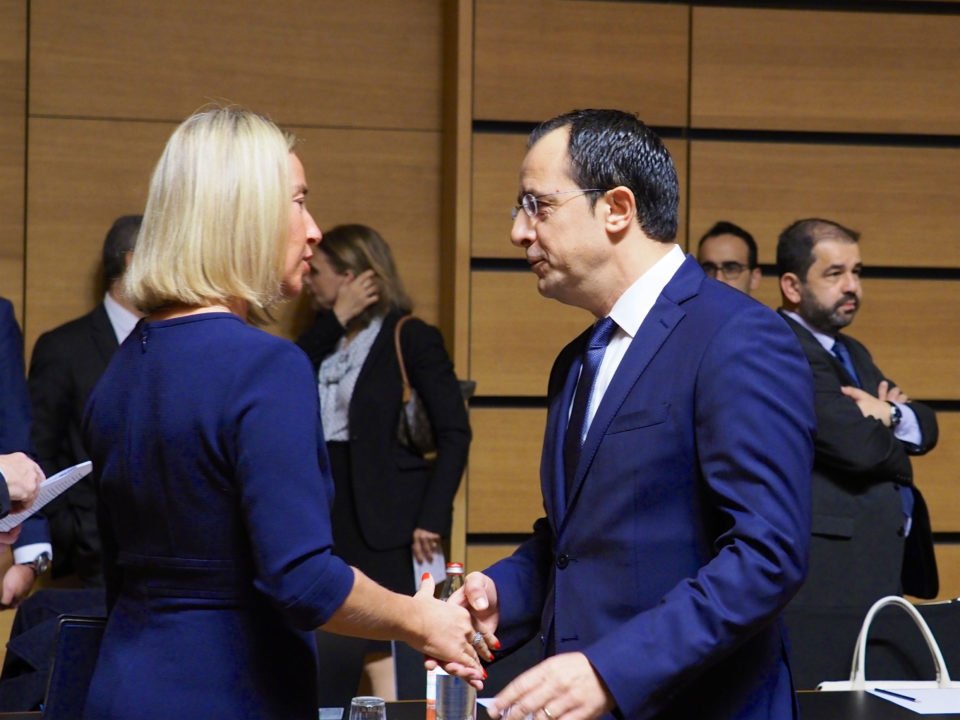 Monday’s decisions in Luxembourg are a continuation of the political, diplomatic and economic measures taken by EU foreign ministers last July in light of Turkey’s non-compliance with EU decisions, Christodoulides said in a written statement.

“I express my satisfaction over the outcome that strengthens our efforts to prevent and put an end to Turkey’s illegal activities,” he said.

He added that the EU has sent a clear message to Turkey that its actions are condemnable, “but at the same time it is also a message to all those involved in these illegal activities that their actions have consequences.”

The main focus of Monday’s meeting in Luxembourg was Turkey’s incursion into Syria, but its hydrocarbon activities in Cyprus block 7 of its EEZ was also on the agenda.

EU countries committed to suspending arms exports to Turkey over its actions in Syria but stopped short of the EU-wide arms embargo that France and Germany had sought.

On Cyprus, the 28 EU foreign affairs ministers said in a text that the council reaffirmed its full solidarity with Cyprus, regarding the respect of its sovereignty and sovereign rights in accordance with international law.
The council “recalls its conclusions of 15 July 2019 in all its parts, and notably that delimitation of exclusive economic zones and continental shelf should be addressed through dialogue and negotiation in good faith, in full respect of international law and in accordance with the principle of good neighbourly relations.”

Based on preparatory work already undertaken, the council “agrees that a framework regime of restrictive measures targeting natural and legal persons responsible for or involved in the illegal drilling activity of hydrocarbons in the Eastern Mediterranean is put in place, and invites the high representative and the commission to swiftly present proposals to this effect.”

No details of the measures were announced.

The minister said that following an understanding between President Nicos Anastasiades and the president of the European Council Donald Tusk the issue will be further discussed at the level of leaders at the forthcoming European Council meeting on Thursday and Friday, which will ratify the Foreign Affairs Council conclusions.

Turkey was quick to condemn the EU’s statements regarding both Syria and Cyprus.

“We will seriously review our cooperation with the EU on certain areas due to its unlawful and biased attitude,” on Cyprus and Syria, the Turkish Foreign Ministry said.

Speaking before the meeting high representative and commission vice president Federica Mogherini told the press: “Today we are mainly discussing the military operations in Syria. […] And obviously, as you know, member states will discuss how far they are ready to go on some measures that are on the table when it comes to the Turkish military activities in Syria, but also the drillings in Cyprus.”

The foreign affairs council conclusions follow Turkey’s latest move concerning the dispatch of its drillship Yavuz to Cyprus’ offshore block 7 off southwest Cyprus a few weeks after the government announced it granted exploration licences on the same block to France’s Total and Italy’s Eni. Turkey said at the time that a section of block 7 was within the Turkish continental shelf, which had been registered with the UN and that it would not allow any foreign country, company or vessel to engage in unauthorised hydrocarbon exploration and exploitation activities within its maritime jurisdiction areas.

Three remanded over suspected scam over payments for homeless