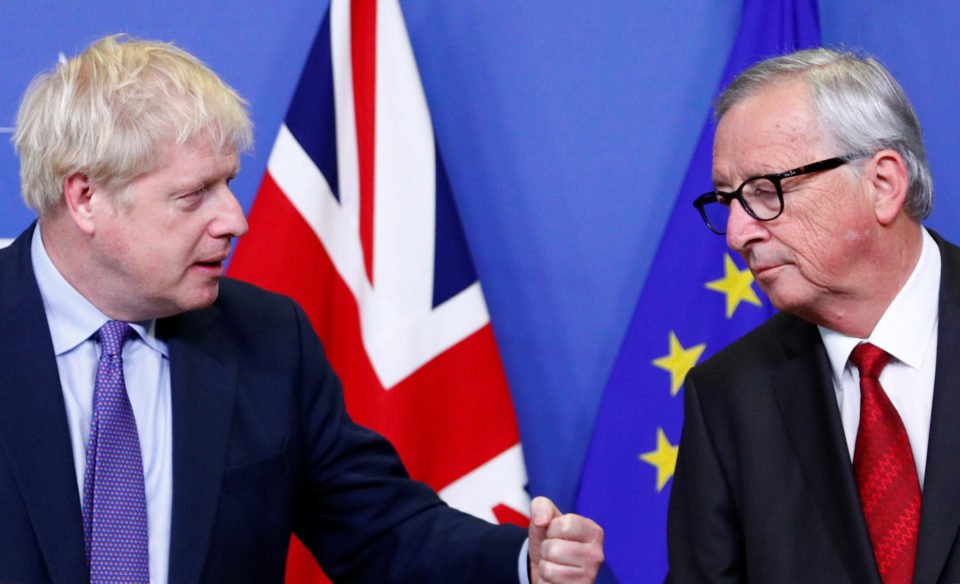 Jean-Claude Juncker, the outgoing president of the European Commission, is a lightweight apparatchik with a gift for languages and a fondness for the odd glass or two. Last week, however, he said something profound about the topsy-turvy world of England and the Brexit process.

He said something so memorable, imaginative and true that only someone in his cups could have said it: in vino veritas.

That everyone speaks English is a touch hyperbolic but generally true. The Americans speak English, as do most people in the Commonwealth and most continental Europeans. The Scandinavians, the Dutch and the Germans even prefer to speak English.

Some also prefer to sing in English; the Swedish pop group Abba sang all their famous songs in English, and most singers in the Eurovision Song Contest do likewise.

Britain took control of the Levant from the Ottoman Empire – except Syria and Lebanon – at the end of World War I by which time English had taken over as the Lingua Franca aided and abetted by the BBC.

The BBC has been Britain’s best propaganda tool since World War II. It still dominates the airwaves with an impartial and reliable news service. Until recently it did so to the tune of Lillibullero, its Irish signature tune that became the hallmark of reliable news bulletins the world over.

The best foreign English speakers are the Scandinavians, followed by the Germans and metropolitan Greeks; Greeks from the mainland who speak English do so with the same fluency they do Greek.

The most reluctant English speakers used to be the French. Not anymore!

There was a time when some French people were reluctant to speak English but this is no longer true, which is just as well because their accent in English is the most seductive. France’s President Emanuel Macron is fluent in English and proud of it, the complete opposite of Charles De Gaulle, France’s president in the 1960s, who regarded English as French spoken badly.

Which conveniently brings us to the second limb of Juncker’s aphorism – that no one understands England.

After France fell in 1940, he sought refuge in London during World War II where he remained a reluctant guest until France was liberated. He was a proud Frenchman who had to endure life in exile while half of France was under Nazi occupation and the other half in collaboration mode, which must have aroused mixed emotions in him. Humiliated by the speed with which France capitulated, grateful to England for enabling him to lead the resistance, but resentful at having to kowtow to les Anglais to do so.

But he returned in triumph in 1944 when the Allies took Paris; he got involved in politics and became president from 1958 to 1969, and steered a path in foreign policy independent of the US and Britain.

De Gaulle’s importance in the context of Brexit is that he vetoed Britain’s entry into the European Economic Community twice for reasons that echo Britain’s reasons for leaving the EU in 2019.

De Gaulle vetoed Britain’s entry in 1963 and then again in 1967 because as he explained at an interview shortly after he torpedoed Britain’s application a second time, Britain was not ready to join ‘the solid, interdependent and assured society of the European Community.’

Georges Pompidou, who succeeded De Gaulle, was not too fussed about Britain’s lack of solidarity with the Community.

Britain joined in 1973 under a Conservative prime minister but without a pre entry referendum. The Labour Party that won the 1974 election was split over membership of the EC and embarked on a renegotiation, and a confirmatory referendum in 1975, and 67 per cent of the British people voted to remain.

But Britain remained suspicious of the European Community’s federalist ambitions.

And she was right to be weary because after a series of treaties beginning with the treaty on European Union on 1992, federal union in place of the common market became its direction of travel; although to be fair the treaty of Rome Britain signed when she joined included an aspiration for closer political union.

In a well-constructed statement to Parliament yesterday Boris Johnson provided an answer to what seems incomprehensible to the outside world that president Juncker said made England impossible to understand.

Britain’s membership of the EU has been half-hearted the prime minister conceded; one half passionately European in culture and civilisation; the other, passionately sceptical about the political construction of a federal Europe and the remote unaccountable bureaucracy in Brussels.

“I hope … that this is the moment when we can finally … reconcile the instincts that compete within us”, he pleaded with MPs.

Nations like individuals have to reconcile competing instincts that need to be reconciled. And the reason why the impasse in the British parliament seems incomprehensible is because the constituency MPs that are returned to parliament under the first-past-the post system are first and foremost answerable to their constituents.

Parliamentarians proximate to their electorate and reflect their views which explains why England is so conflicted over Europe. MPs in England are not remote and unaccountable.

Christakis Christofides was a dear friend, Rest in peace