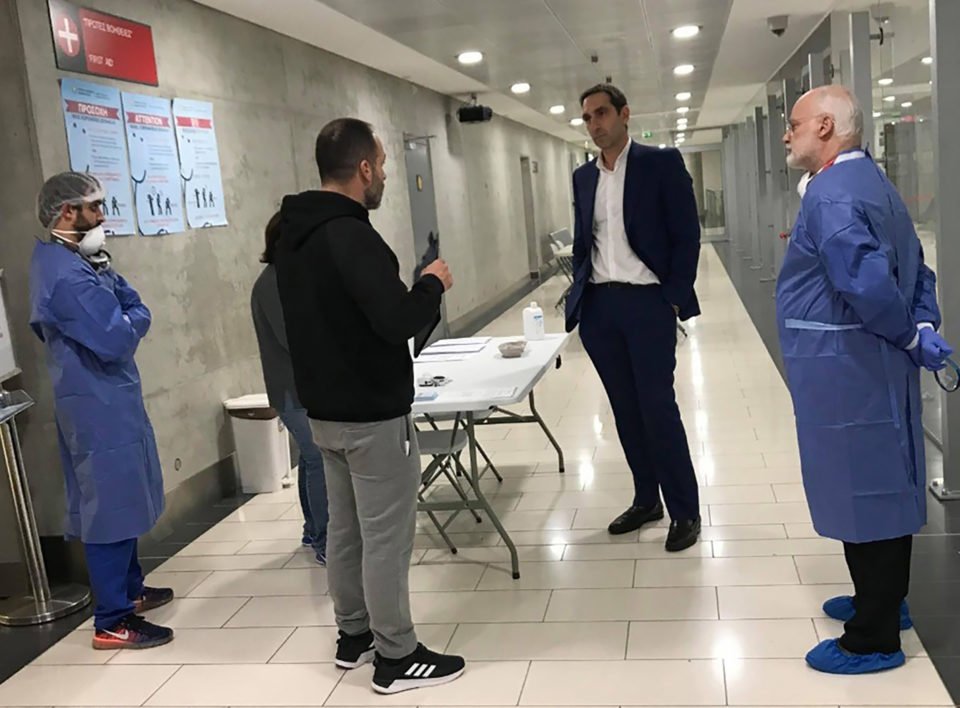 By Evie Andreou and Nick Theodoulou

Tests were being run on Wednesday to confirm whether a woman, who had direct contact with a coronavirus case, has been infected, as the government said more staff would be put in place at crossing points to increase Cyprus preparedness.

The developments came on the same day Greece confirmed its first case of the virus.

“We can confirm that a woman has only recently come in and tests are ongoing,” an official at Limassol hospital told the Cyprus Mail.

The woman, who was admitted into hospital at 7pm on Wednesday, came into direct contact with a confirmed coronavirus case in Italy, the health ministry said.

The incident occurred one week ago, and the woman will spend another week in hospital until the 14-day incubation period is over, however she is currently not displaying any Covid-19 symptoms.

Director of the hospital, Christos Nicolaou, said she was being kept in the hospital as a precautionary measure.

She is currently on the fifth floor of the hospital, where there are four isolated rooms – suitable for such cases.

Earlier in the evening, Health Minister Constantinos Ioannou was present at Larnaca airport as 12 students and their two teachers arrived at Larnaca airport, having left coronavirus-hit Italy which has 11 quarantined towns.

Ioannou said the group, who had gone for an exchange visit, have had medical checks and are not showing any symptoms of the Covid-19 virus and will be allowed home.

The students were given instructions on how to monitor their condition and recommendations were made for a 14-day self-quarantine at home.

As part of measures to increase Cyprus’ preparedness, more staff will be promptly dispatched to the crossing points with the north to improve screening as part of efforts to prevent the spread of coronavirus (Covid-19), Ioannou said.

Speaking after a meeting with the foreign and justice ministers and the interior ministry’s permanent secretary earlier in the day, Ioannou said that more measures would be taken in addition to extra staff at the crossing points if necessary.

He said that they assessed the situation to date and discussed the action plan drawn up by the competent services in case the World Health Organisation (WHO) declares a Covid 19 pandemic.

“As a first measure, it has been decided to tighten controls at crossings, with additional staff from the police and with some other restrictions,” Ioannou said.

Some other measures are being evaluated that will be carried out in the coming days if and when necessary, he said, adding that announcements would be made in due time.

“It is not something to worry about,” he said.

This sentiment was echoed by one of the teachers accompanying the students, Andreas Antoniou.

“The students didn’t want to come back. The panic is here in Cyprus – not in Milan,”  he said to reporters outside Larnaca airport.

Ioannou said he and his colleagues would brief President Nicos Anastasiades at Thursday’s cabinet meeting.

The minister said Greece would not be put on the list of high-risk countries after Athens confirmed the country’s first coronavirus case on Wednesday.

WHO determines which countries are high-risk, based on the epidemiological data available.

He said the countries considered as high risk right now are the ones announced on Tuesday when it was announced authorities would extend checks on passengers arriving on the island from northern Italy, South Korea, Japan and Iran in addition to those arriving from China. 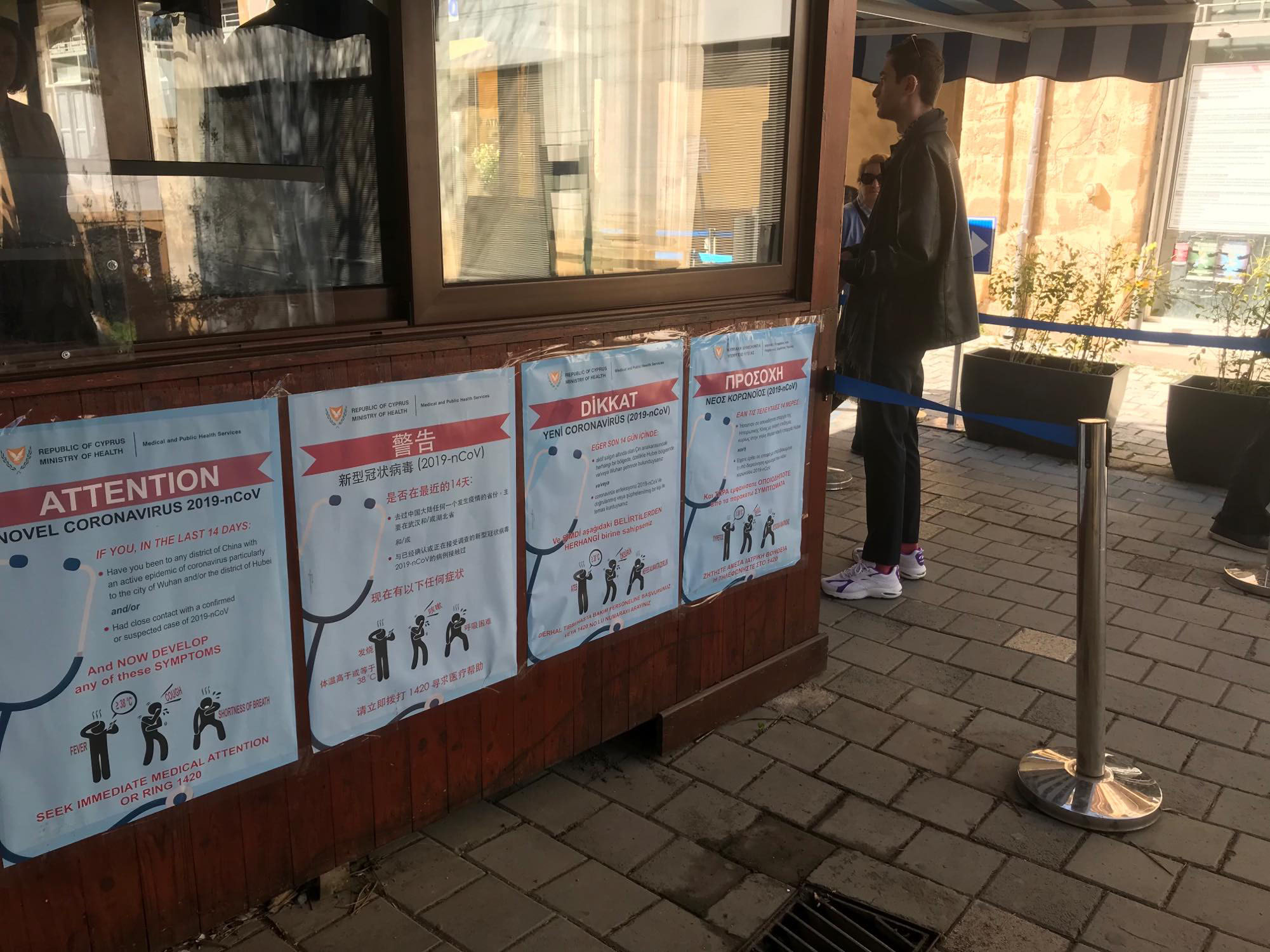 More staff will be in place at crossings points such as Ledra St in Nicosia (Christos Theodorides)Earlier in the day, Ioannou visited the Ledra Street crossing in Nicosia where information posters have been put up in four languages, Greek, Turkish, English and Chinese. He said he was satisfied with the measures being taken at crossing points but more could be done.

The minister said though this was his first visit to a crossing since the corona virus hit globally, the head of the state medical services had already been to the crossings three times to make sure the instructions given on the coronavirus were implemented.

“I have to say that indeed they are being followed,” the minister said.

One of the possible problems is communication.

“Despite the fact the information flyers are in four languages, the possibility of printing them in other languages will be looked into,” he said.

He added that police officers check the stamps on the passports of persons crossing to confirm that they have not recently been to the countries that are considered high-risk.

“This however takes additional time and that is why more staff is perhaps needed at busy crossings,” he said earlier in the day.

In the meantime, some private schools have advised parents to avoid travelling over the half term to countries with large numbers of cases, such as China or at least mainland China, the Hubei province and Macau, Japan, Italy, Iran, South Korea, Singapore, USA, Hong Kong, Taiwan and Thailand.

“If this is unavoidable then we would kindly request that you self-quarantine your child for 14 days on your return,” one Nicosia-based school told parents in a message.