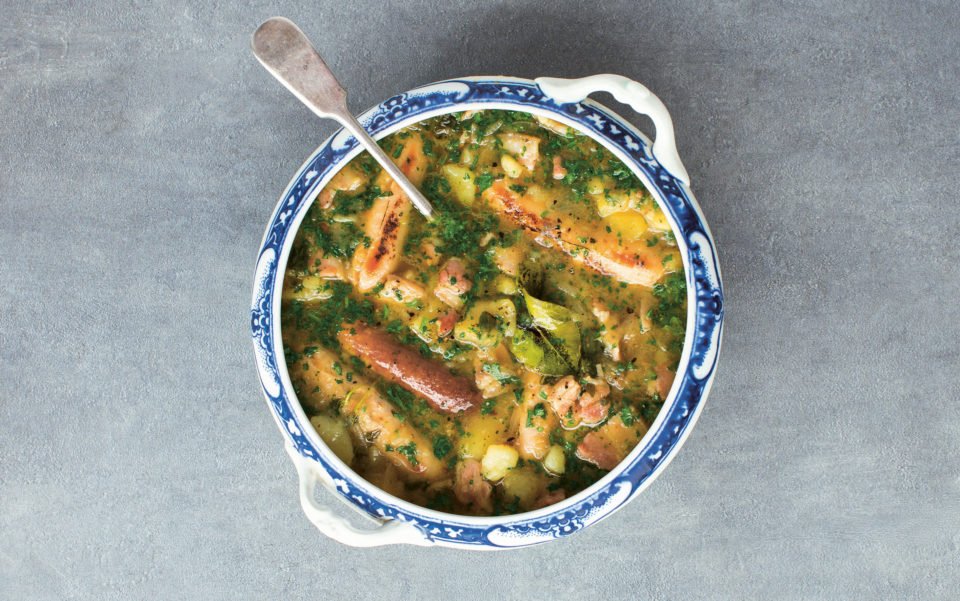 What did people eat for dinner 10,000 years ago? It’s a question Irish chef Jp McMahon considers a lot. “I’m always thinking about that period in time,” says the author and food writer.

He finds himself endlessly intrigued as to whether the food then was “any more Irish than what we eat now”, and says he’s fascinated with how ‘terroir’ cooking (using indigenous ingredients) now would compare.

You can see why the Galway-based restaurateur was tasked with compiling new recipe compendium, The Irish Cookbook. The weighty collection investigates the ‘peasant tradition’ presumption, explores historical and contemporary cooking (McMahon went deep into Irish recipe archives), and champions the produce Ireland naturally offers up.

And it turns out, 10,000 years ago, Ireland’s first settlements were busy with people scoffing stuff you’d still recognise today. “The three pinnacle foods would’ve been: salmon, trout and eel,” explains McMahon. “You also had a lot of wild game, duck – particularly mallard – pigeon and woodcock, and then a whole host of indigenous plants, such as wild garlic, nettles.”

People would have also been cracking open oysters and scallops, mussels, cockles and clams, not to mention cooking up dishes of seal, puffin, squirrel and bear. The bears are of course all gone now though.

When people think about Irish food though – your lamb and barley, beef and Guinness stews – McMahon says “they’re really thinking about it in the last 200 years. A lot of these recipes only date to the 19th century, and once you go back beyond that point, it gets very, very messy,” he adds.

McMahon even discovered a recipe for pickled heron: “I had to ask a historian, because I was like, ‘Do you think they meant to say herring?’ But no – people would literally eat anything that would move.

“The fact someone wrote it down would mean it wasn’t something people were eating out of starvation,” he adds, quite impressed.

Warm the oil in a large pan over a medium heat. Add the sausages and bacon and fry for about 10 minutes until they have a nice colour. Remove the meat from the pan and set aside.

Add the sliced onions to the pan and a little more oil if necessary. Reduce the heat and fry for about 10 minutes so that the onions caramelize slowly.

When the onions have a nice colour, return the sausages and bacon to the pan and add the thyme and bay leaves. Cover with the chicken stock (broth) and return to the boil. Reduce the heat to a simmer and add the potatoes. Cook for about 30 minutes.

Add the chopped parsley and plenty of black pepper and serve.

3 handfuls of mixed seeds (such as pumpkin seeds, sunflower seeds and linseeds/flaxseed)

50g pinhead oats, for the topping

Stir all the dry ingredients together in a large mixing bowl. Add the treacle, eggs and buttermilk and combine, then add enough stout until you achieve a wet dough.

Pour the dough into the two prepared loaf pans, sprinkle the oats on top and bake in the preheated oven for one hour 30 minutes to one hour 45 minutes, until the loaves sound hollow when the bottoms are tapped or the core temperature is greater than 85°C/185°F on a meat thermometer.

An advocate of change