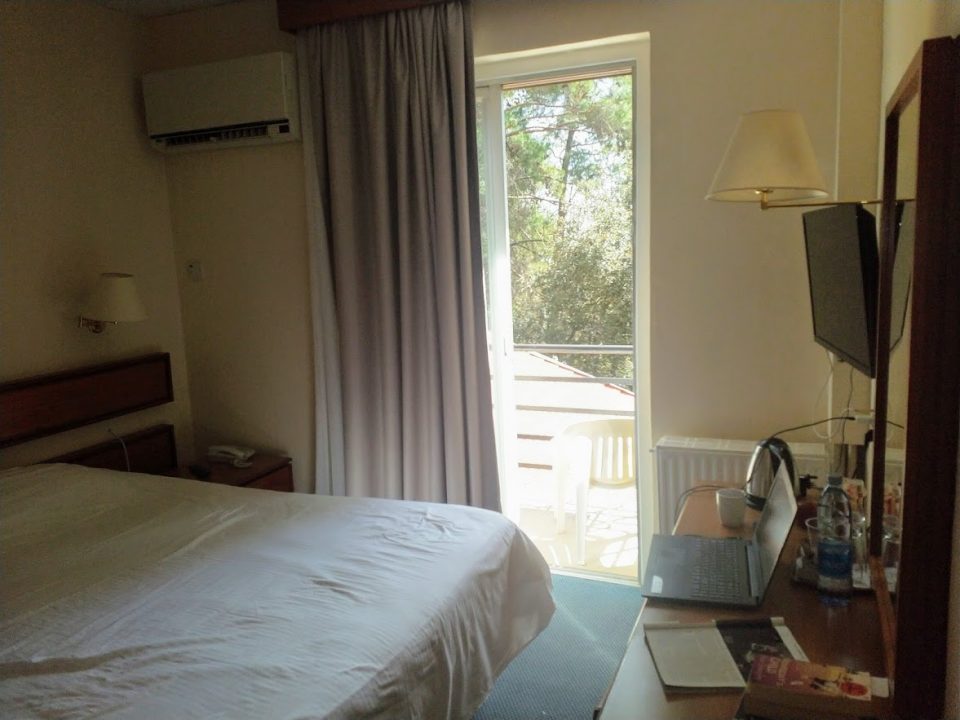 The hotel room where one quarantine man was staying in Cyprus

Many of the 1,200 people still in mandatory quarantine are complaining about their living conditions, but for one man it’s not too much of an ordeal

Monday night’s announcement of a lockdown spooked many, but for Mark Cox being stuck at home in Nicosia with his family will be a welcome change from his enforced stay at the Forest Park hotel in Platres.

For Mark the lonely lockdown is more than that: he’s been in quarantine for the past 10 days. He will not be able to see his wife, son and daughter until the mandatory 14-day period is over, another four days away.

As we spoke on the phone, it was clear the Nicosia-based British bookseller is keeping his spirits high. Not that anyone would choose quarantine, but if you had to, the historic mountain hotel set among a pine forest is likely a winning candidate.

“The food’s quite good actually, I might be putting on some weight I think. I’m eating more than I normally would,” he said. “I’ve been joking with my wife that I might ask for an extra week here.”

Those two weeks are being spent in quite a small room, with just about enough space to do some jumping jacks for exercise.

“But the view from the hotel is amazing, I’ve been sitting out on the balcony a lot and getting fresh air. When you’re outside you don’t feel so claustrophobic,” he said.

Under normal circumstances, Mark would be able to survey the scenery and decide which of the many walks he wanted to go on. From old churches to ancient bridges and rejuvenating mountain walks, there’s a plethora of places to go.

For the rest of us, the lockdown can still be broken down by going out to exercise and walking the dog (at time of writing at least), but for Mark, there’s no such luxury despite staying in a four-star hotel.

All the major selling points of the hotel are strictly off-limits. To name just a few: the jacuzzi, tennis courts, and of course the hotel’s famous outdoor swimming pool are empty.

“The first thing the kids asked was had I been down to the swimming pool. Well, no, not quite,” he joked. “They’d been here a few months back on a skiing trip. I’d told them we could come sometime, and it appears I’ve arrived a bit early.”

Does his 10-year-old daughter understand what the unprecedented situation means?

“My daughter is having online lessons and told her class that her daddy’s in Cyprus but is in quarantine,” Mark said. “The kids are happy because they understand that if I didn’t manage to get back when I did then I may not have seen them for months.”

Mark’s journey back to Cyprus began in his family’s village in Surrey, UK where he was staying with his mother after a business trip.

“I had been doing my part to avoid crowds and be responsible,” he said. “But then I had to go into busy central London – on the Tube! – because I had to get the certificate.”

He was referring to the certified health certificate proving an individual was coronavirus-free that the government was demanding to allow the repatriation of citizens and permanent residents.

Thousands of people calling Cyprus their home were seemingly stranded abroad overnight. Faced with the task of deciphering a flurry of government announcements, only added to the stress imposed by the global Covid-19 pandemic.

On the ground were the officials trying to implement the government’s orders, which at times changed by the hour, and assist people in returning home.

“The Cyprus High Commission (in London) was excellent. Very kind, professional, very understanding and seemed to really care about us,” Mark said.

“I was one of the few that had a flight back on March 19, via Athens. Others – once they got their certificate – were frantically searching for flights,” he explained.

The first part of Mark’s long journey back home to his family, with a stop-off in quarantine, was underway.

His experience when he landed in Cyprus was slightly more challenging than at the Cypriot High Commission in London.

“It was not very well organised, no communication, and we were left on the plane for quite a while,” he said.

Two officials in full protective gear and suits boarded the plane, took their papers and travel documents. There was a lot of paperwork to get through and the 119 passengers waited for two to three hours.

“After that, we were bussed off but not even told where we were going.” he said. “It was quite intimidating.”

That he was taken to that hotel was a stroke of luck even though quarantine is a lonely experience.

“You hear some other people, there’s a couple on the other side, but I can’t really talk to anyone here,” he said.

“But a lady from the hotel called up yesterday, asking how I was doing, and we had a long chat. I was very touched by that. It meant a lot.”

“She was telling me all about the history of the hotel. She brought some books up for me because I’d finished reading mine. There are some very kind people here, realising how serious it all is.”

Now more than 80 years old, the hotel has a rich history and is no stranger to being commandeered by the authorities. During the Second World War the British colonial government took it over as a military hospital and again during the Suez Canal operation in 1956.

It makes much of its famous guests, among them the late King Farouk of Egypt. But of particular interest to book-loving Mark is novelist Daphne du Maurier, who spent a month at the hotel in 1936 – the year it opened – and wrote parts of Rebecca there.

Many are now finding out that time spent in self-isolation, and more so in quarantine, can warp into strange shapes. So how does Mark fill the day?

With a lot of reading, and where possible – if the weak WiFi permits – calling friends, family and trying to connect to work meetings.

As for the setup itself: “There’s three-meals a day and they knock on the door, leaving the food there and it’s polystyrene covered,” he said. “A bag of cleaning products was brought up, and every three days fresh bed-sheets are given out.”

Officials from the health ministry have also taken his temperature frequently and checked up on how he is doing.

“I’m in good health, but you get a bit paranoid,” he said. “You look outside and see everyone with masks on and you feel contaminated.”

But he’s not complaining about the measures.

“They are necessary, and it’s good to see people taking it so seriously.”