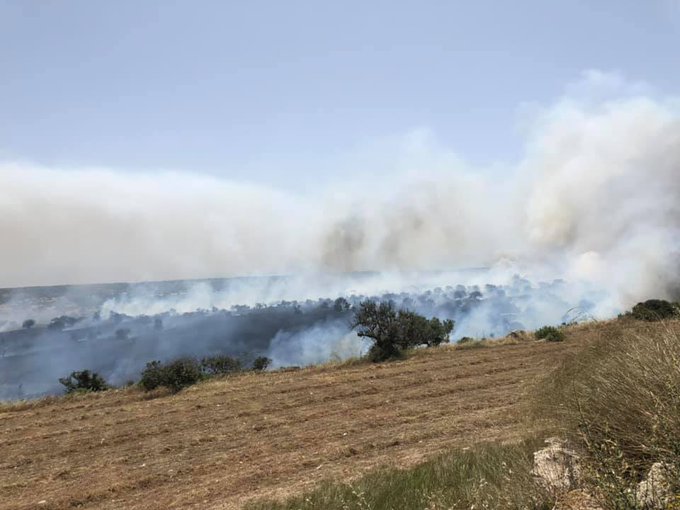 Another fire broke out late Sunday afternoon, bringing the total number of fires to six across the island, the latest of them in Ypsonas, Limassol.

The first fire was reported in the morning after a forest fire broke out near the Limassol-Nicosia highway in Kakorazia, forcing sections of the road to be closed for four hours, followed by two fires in Ayia Napa, one in the north and a smaller one in Paphos.

Just as the four fires in the Republic had been brought under control, news broke of a fifth one in Ypsonas which began at around 3pm.

Six firefighting vehicles were at the scene, four from the fire services and two from the British bases.

Flames had even reached the back yards of homes before they were extinguished. Strong winds were hampering the battle to control the flames.

Meanwhile, students of the Middle East Technical University’s campus in the north were evacuated after huge fires in Diorios and Kormakitis villages. Turkish Cypriot authorities have asked Turkey for help, requiring two helicopters. The Republic also sent one aircraft from the forestry department and one helicopter.

“At the moment we have only provided aerial help, but we are prepared to send help on the ground if it is asked of us,” fire services spokesman Andreas Kettis told the Cyprus Mail.

Efforts were underway to get the fire under control but winds were making the situation all the more difficult, the Cyprus News Agency reported.

Akinci said it was too soon to say what the cause was. The road between the two villages was closed off.

In a telephone call with President Nicos Anastasiades, Akinci thanked him for the Republic’s quick offer of help.

As the fire department brought the fire near the Limassol highway under enough control to reopen those sections of the road which had been closed, fire services also had to tackle two separate fires in Ayia Napa which began at around 2pm.

Kettis told CNA one fire was on the first exit to Ayia Napa from the Larnaca-Paralimni highway and the other was a few metres away, at the Ayia Napa roundabout.

Three firefighting trucks from the Famagusta fire station were at the scene and efforts were underway to get an aircraft to help. By 4pm, both fires were under control, Kettis told the Cyprus Mail.

Meanwhile in Chlorakas, Paphos, the fire services extinguished a fire there shortly before noon. Two fire trucks were at the scene though the fire burnt through two donnums of dry vegetation and garbage. Two homes and two trees sustained minor damage.

Investigations are underway to determine the cause.