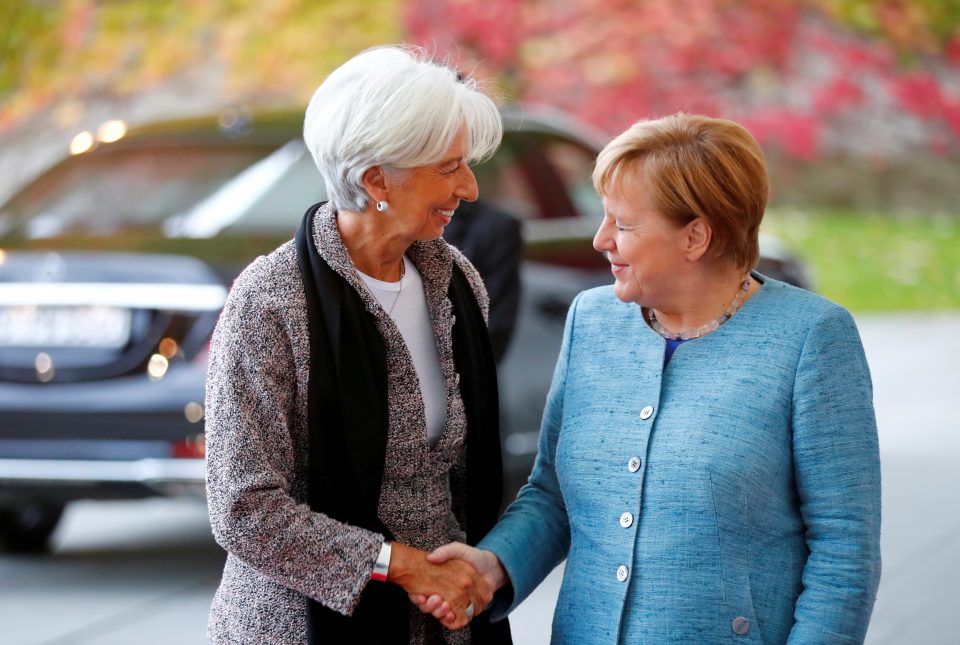 Christine Lagarde's (ECB) backing for the project is crucial, but it would also require the blessing of Germany (Chancellor Merkel)

European Central Bank officials are drawing up a scheme to cope with potentially hundreds of billions of euros of unpaid loans in the wake of the coronavirus outbreak, two people familiar with the matter told Reuters.

The project, which comes as Europe mobilises trillions of euros to bolster the region’s economy, is aimed at shielding commercial banks from any second fallout from the crisis, if rising unemployment chokes off the income needed to repay loans.

One of the people familiar with the plan said the ECB had set up a task force to look at the idea of a “bad bank” to warehouse unpaid euro debt and that work on the scheme had accelerated in recent weeks.

The ECB declined to comment on whether it was working on a bad bank scheme.

The amount of debt in the euro zone that is considered unlikely to ever be fully repaid already stands at more than half a trillion euros, including credit cards, car loans and mortgages, according to official statistics.

That is set to rise as the COVID-19 outbreak squeezes borrowers and could even double to one trillion euros, weighing on already fragile banks and hindering new lending, the people familiar with the ECB plans said.

While the idea for a euro zone bad bank was discussed and shelved over two years ago, the ECB, under its new President Christine Lagarde, has consulted banks and EU officials about a scheme in recent weeks, one of the people said.

As the euro zone’s most powerful institution, ECB backing for the project is critical but it would also require the blessing of Germany, the bloc’s biggest economy.

Berlin has long opposed schemes that accept shared responsibility for debts in other countries although it recently had an unexpected change of heart, agreeing to pool EU borrowing for a coronavirus recovery fund.

One blueprint under discussion would involve the European Stability Mechanism, an EU institution which can provide financial assistance to euro zone countries or lenders, standing in as guarantor for the bad bank, the people said.

The bad bank would then issue bonds which commercial banks would buy in exchange for portfolios of unpaid loans, neutralising the virus shock for Europe’s lenders. The banks could then lodge those bonds with the ECB as collateral for central bank funding, one of the people said.

Major European commercial banks could be called on to join forces to underpin the scheme, the second person said.

While European countries are now focused on launching a 750 billion euro plan to help economies hit by COVID-19, the idea of a bad bank, and the ECB blueprint, could come up for discussion among central bank governors and ministers later this year.

Asked on Tuesday about bad banks, Andrea Enria, the ECB’s chief bank supervisor, said while he supported the concept, it was “premature” to discuss one now because it was not clear how severe the impact of the coronavirus outbreak would be.

“I have been very supportive of asset management companies. I think they are useful,” he told reporters, highlighting the success of bad banks in Spain and Ireland in the aftermath of the financial crisis. “Many of these schemes have ended up in the black, making profits.”

Enria said the ECB was studying how banks could cope were the crisis to worsen. He said banks had more than 600 billion euros ($680 billion) of capital and this would probably be enough, unless there were a second wave of infections.

Still, any pan-European scheme to tackle the problem of bad loans would likely face political objections from Germany, which has long resisted attempts to support banks in weaker countries for fear it could get lumbered with unpaid bills.

Markus Ferber, a German member of the European Parliament, said Berlin remained opposed to taking on such mutual guarantees. “National bad banks could be a first step,” he said.

Marco Zanni, an Italian lawmaker in the parliament, said the EU decision making process was too complicated and too slow.

“Looking at the past crises, the experience is that European solutions come too late,” he said. “When you’re facing a crisis … you need to act in days or weeks, not months or years.”

Banks in Italy and Greece, for example, were still recuperating from the fallout from the financial crisis more than a decade earlier when the pandemic struck.

But while the problem of unpaid loans has been concentrated chiefly in poorer EU countries since the 2008 crash, the widespread impact of the coronavirus, which has hit Germany hard, could see borrowers everywhere struggle.

The European Commission, the EU’s executive branch, said it had outlined how bad bank schemes could function but no “formal work” was underway. It said banks had been given more regulatory leeway but could “explore all relevant possibilities” if needed.

“Having a European bad bank would help. For the bad debt itself, nothing changes. The debts still need to be worked through and the money still has to be paid back.”

George Floyd hailed as ‘cornerstone of a movement’ at funeral; family calls for justice