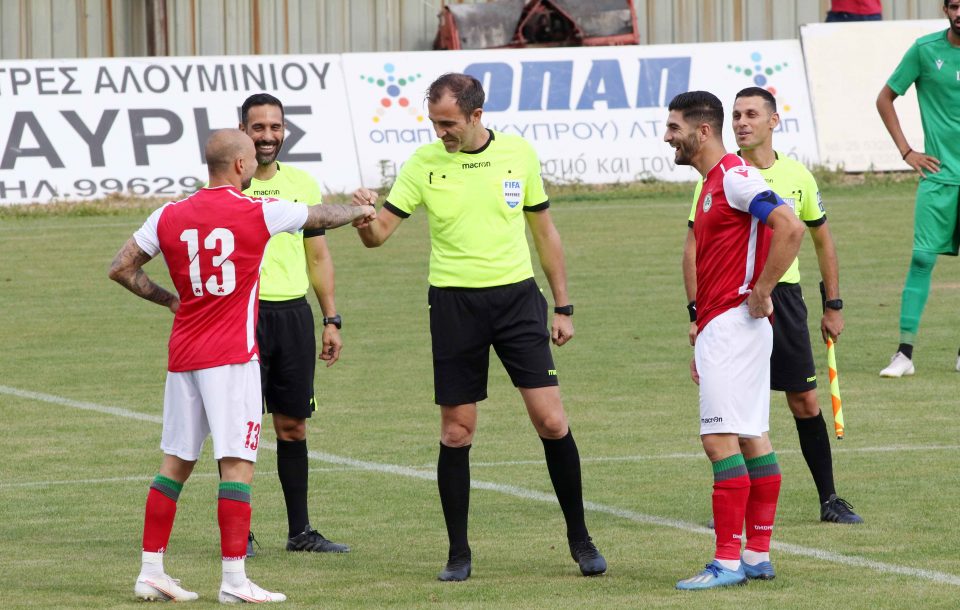 Cyprus Football Association Secretary General Fivos Vakis said that the cost of bringing foreign referees to officiate games in Cyprus is huge and that although the CFA is shouldering a portion of the financial burden, the rest is too high for the smaller clubs

Vakis spoke on a number of issues, including officiating, fan attendance during the upcoming season, and the possibility of hosting Uefa games in Cyprus.

In terms of officiating, Vakis added that “a lot of money is being spent and we are expecting a lot from the referees.

“It’s in their hands to enforce the rules in the manner in which they have been taught to enforce them. Ourselves and the refereeing coaches will see how we can overcome this issue”.

Vakis said that the cost of bringing foreign referees to officiate games in Cyprus is huge and that although the CFA is shouldering a portion of the financial burden, the rest is too high for the smaller clubs in the division.

Continuing on the issue of foreign referees, Vakis explained that this prospect may return but it is conditional on how things go during the season. “It depends on the performance of Cypriot referees”, the secretary general said, before adding that “if they win the fans over then no one will be calling for the use of foreign officials”.

On the refereeing committee and who will be comprising it, Vakis was reticent, saying “I don’t want to comment on this, we will be making an official statement soon, perhaps during this week”.

The CFA has reportedly also hired a new refereeing coach but his name cannot yet be revealed due to contractual reasons. Presumably, the CFA will be making the announcement during the aforementioned press conference.

On the issue of fan attendance next season, Vakis said that things haven’t changed but that the CFA will react accordingly if the epidemiological status of Cyprus shifts in a negative way. “The state of play remains as it was, with stadium capacity capped at 33 per cent, however, this may change if the pandemic dictates it”, Vakis said.

“We want to have a good rapport with the responsible government authority, we can’t do anything different, although our goal remains to up capacity to 50 and then 100 per cent”, he added.

On the possibility of away fans being able to attend games on the road, Vakis put the onus on the home team. “If a team allows away fans to attend a game, they have to allocate one of their stadiums entirely to those travelling fans”, Vakis said.

“If even a single away fan attends the game, then an entire stand has to be given to them”, Vakis added. “This means that the home team will have a dramatic reduction in home fans and will not be able to host their desired number of fans based on the 33 per cent cap”, he explained.

On the prospect of hosting Uefa competition games in Cyprus, Vakis left the door open for this to happen, but stressed that this would not be easy. “We have made our stance known to Uefa. Cyprus is one of the countries which allows visitors from abroad”, Vakis said.

“Uefa will make its decision over the coming days, although decisions now change on a weekly basis due to the coronavirus outbreak”, Vakis added. “This is a huge issue, it’s very difficult and there are many obstacles. Uefa is doing the best it can”, Vakis concluded.