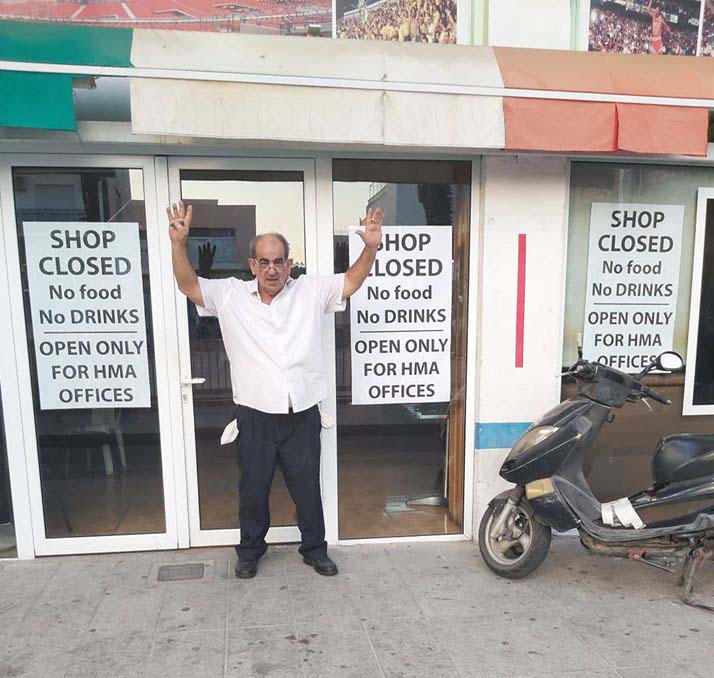 By Bejay Browne and Evie Andreou

As authorities ramp up daily checks on violations of the latest measures against the spread of coronavirus, complaints have begun to emerge about police heavy-handedness and the unfair imposition of stiff penalties, often to people who cannot afford to pay them.

In Paphos the president of the federation of restaurant/leisure owners Fitos Thrasivoulou told the Cyprus Mail on Friday that many establishments were being fined €500 a time and again by heavy-handed police who are writing tickets for violations that are out of the owners’ control.

He stressed that there was a need to keep everyone safe and follow the Covid-19 decrees and restrictions, but that some police in Paphos were taking things to the extreme.

“The police are using the coronavirus as an excuse and yes, we have to be careful, but our members are complaining that time and again police officers are giving them large fines for not ‘policing’ customers,” said Thrasivoulou. He fears most Paphos establishments will be forced to close in the end.

“Are we expected to run behind customers every time they get up to go to the toilet and tell them to keep moving past a table where they are greeting friends who are and remain seated on their way to the rest room and they don’t sit at the table either? This is what some of the fines are for and It’s ridiculous.”

He said the fines for overcrowding, staff not wearing masks and so on are a different matter and should be implemented, but that petty fining for nothing will ensure many local businesses in Paphos close their doors.

“Many wish they had never opened at all and how are they expected to find this money when they have been closed for nine months. There are no warnings, just fines,” he said.

Limassol pensioner Louis Koutroukides on Friday spoke of ‘state terrorism’ after being fined €1,500 last Sunday evening at the club he runs in Limassol, which is a gathering place frequented by Asian domestic workers on their day off.

The club, which is in the same premises as the house maids association (HMA) he runs, opens only on Sundays, he said, offering the opportunity for them to socialise and have meals if they wish at affordable prices.

He told the Cyprus Mail the reason for the fine was that the two women who were cleaning the premises after they closed for the day, were not wearing masks.

He claimed that the plain-clothed police officer who walked into his shop that day did not have a mask on either. Four more were waiting outside, he told the Cyprus Mail.

“We were closed, there were no people in the shop,” he said.

Koutroukides said though initially one of the officers said he would fine him €500, one of the others said the fine should be €1,500 “and his colleague obliged”.

“I was forced to borrow money to pay the fine since I could not afford to,” he said, adding that his pension is €350 per month.

Koutroukides believes the officers could simply give him a warning instead of slapping him with such a steep fine.

He said he is now scared of opening the club again fearing he could get fined again.

“Fining people is not an end in itself,” Police spokesman Christos Andreou told the Cyprus Mail. “Many times, we caution people,” he said.

He added that due to the current situation and the surge in coronavirus cases, they have strict orders to carry out intensive checks.

On the claim one of the officers was not wearing a mask, he said if this is true that officer is also subject to an offence like anyone else. He said officers have strict instructions to observe all health safety measures that apply for everyone.

Another man from Nicosia, Marios, a taxi driver, said he was fined €300 right after walking out of a kiosk for not wearing a mask. He had taken it off when exiting his vehicle.

“I went inside to buy cigarettes, mask in hand, I did not put it on, as soon as I walked outside, a police officer gave me a fine,” he told the Cyprus Mail.

Though he did not complain about being fined, his concern is coming up with the money to pay the fine in 15 days. He said if he does not pay it on time, it will be increased by 50 per cent and if he still doesn’t pay, he will have to go to court.

“It’s a lot of money, I don’t know what to do,” he said, adding his wife doesn’t know about the fine and that he had to come up with the money without her finding out, fearing marital problems.

Andreou said police cannot do anything as regards special arrangements for people who are unable to pay the fines such as allowing them to pay in installments.

Thrasivoulou said that although many restaurants and leisure facilities are open in Paphos, for around 80 per cent may not be for long as they are facing the worst problems in recent history due to the fallout from the coronavirus pandemic.

The hefty fines being dished out are making it almost impossible for many to survive, he said.

“Many of the premises that are open in Paphos, around 600 or so, many of them will just be for this two-week holiday period and the only ones ‘working’ are those on the seaside as they are popular with the locals, he said.

Despite it being August, usually a time of peak season for the island’s businesses, premises are struggling, particularly in Paphos which is heavily reliant on the British market, he said.

“There is just no-one about. A handful of tourists here and there and none to speak of from the UK. Things are not looking good for restaurants at all, there are more and more problems and if the British don’t start to come, at the end of August, many will put themselves into ‘lockdown’ and just shut,” he said.

Thrasivoulou said that businesses will have no choice but to take this action as many have been closed since November last year and are unable to survive day to day, let alone get ahead.

The government should do more to help and also advise businesses and police on how to better handle the current situation and restrictions, he said.

Fire raging between Paphos and Limassol was set deliberately (update 4)